Previous Issue
Issue 87
About Us
HOME / Toast to the Profession
FEATURE ARTICLE - Issue 77: Nov 2016, Speeches and Legal Articles of Interest

Toast to the Profession

Toast to the Profession

In any event, taking that as my working assumption, and in an attempt to fulfil such expectations, I directed some careful thought to what could be said on that topic.

Hampered – you will immediately appreciate – by not having the advantage of a barrister telling me what to do, I had to do all my own thinking.

I came up with nothing.

A desperate search for inspiration ensued.

I consulted the font of all wisdom.

I was surprised to find, ladies and gentlemen, that Mr Google could tell me nothing useful on the subject “nice things to say about barristers”.

Indeed, the first page of results ranged from –

a page from Tony Morris’ Lex Scripta website, entitled “Briefing Barristers: Ten Ways To Make The Experience A Happier One”;

Lawyer Jokes – The good, the bad and the dirty.

I suppose I really shouldn’t say that I got nothing from consulting Mr Google.
That last website did lead me on a chain of enquiry which left me with two telling insights into the character of barristers. 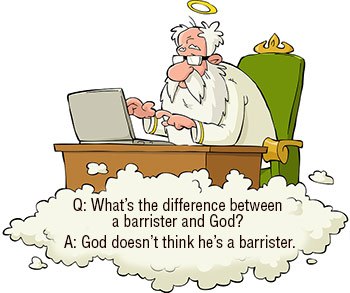 Q: What's the difference between a barrister and God?

Q: What's the difference between a cat and a barrister?

A: One's an arrogant creature that will ignore you completely unless it thinks it can get something out of you. The other is a house pet.

On reflection, I suppose, these observations might be thought to cut somewhat too close to the bone.  They could even be said to be outside the ambit of my brief.

So let me attempt for a moment to articulate what I really think about the profession of the bar, from my relatively recently altered perspective.

The best of you, ladies and gentlemen, make being a judge, a joy.

The best of you, can be trusted to have done the work, to put the arguments that can be put (and no others), to put them as high as they can properly go (and no further) and to concede what should be conceded (and no more).

And when - as is inevitable from time to time - a judge is on the low side of a steep learning curve on a particular aspect of the law or the facts, the best of you can be trusted not to lead the judge into error.

As an aside – mentioned at this time for no particular reason - thank you to all members of the criminal bar who have appeared before me.

But far more important than your contribution to judicial job satisfaction, the best of you, by your assiduous attention to the ethical performance of your tasks, are critical cogs in the wheel of the administration of justice according to law.

The best of you, of course, do much more than merely your own jobs for reward.  You volunteer on the Association, but also on other organizations.  You review proposed legislation and provide commentary and submissions to Government.  You do pro bono work.  You write papers which you give for the benefit of members of both sides of the profession.  You give lectures for students.  You mentor others.  You provide each other collegiate support.

Your role in the administration of justice according to law is no small thing, ladies and gentlemen.  It is easy to lose this perspective in the hustle and bustle of trying to do the job.  But let me remind you.  The proper practice of the law by professionals who know what they are doing and take the job seriously is an important societal good.

Not every society has the rule of law.  We do.  The best of you, by the performance of your profession and the roles ancillary to it, contribute greatly to the rule of law.

It is by all of you continuously striving to be amongst the best of you, that the rule of law is promoted and strengthened.  By itself this is a good thing.

In his speech on the occasion of his swearing as Chief Justice of Australia, Sir Gerard Brennan said:

The security which each of us has is the law. Sir Thomas More of the "Man for All Seasons" is surely right to put to Roper -

"This country's planted thick with laws from coast to coast ... and if you cut them down ... d'you really think you could stand upright in the winds that would blow then?"

Despite jokes made by the cynics in our society about lawyers, the truth is that without them, the laws wouldn’t get properly written, contests about their application wouldn’t be justly resolved, and they wouldn’t get fairly enforced.  Without them, the security of which Sir Gerard spoke could not exist.

And never forget ladies and gentlemen, that it’s a security which is under threat in many parts of the world.  I read in the Australian only at lunchtime today a report of concerns expressed by the President of the ABA regarding –

(a)  fatal attacks on lawyers in Pakistan;

(b)  moves in Malaysia to undermine that country’s Bar Council by legislative change; and

I’d like to think that the institutions of our society are sufficiently robust that there is a low risk of such things happening here.  However if that is to continue, you must be alert to circumstances which require you to defend your roles, and, I might say, those of courts and tribunals, remembering always the fable of the frog which was subject to incremental increases to the heat of the pot of water in which it resided.

Ladies and Gentlemen … even though God doesn’t think he is a barrister … please join me in a toast to the Profession.