Book Review: Calling Out the Troops – The Australian Military and Civil Unrest 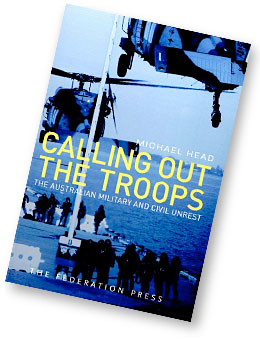 Book Review: Calling Out the Troops – The Australian Military and Civil Unrest

The book is divided up into three parts those being Part 1 the Context, Part 2 Probing the Details and Part 3 the conclusions.  Within those three parts are eleven chapters ranging from the constitutional framework to military callout legislation to global trends and democratic implications.

The book follows in essence, the development of the military callout powers that were introduced into and passed by the Commonwealth Parliament in 2000 and 2006.  It examines issues and potential issues that have been raised as a result of the legislation that has been passed.

It traces the historical use of and deployment of the troops over the last couple of centuries with particular emphasis upon the use of troops within Australia.  It also analyses and comments upon several High Court cases in relation to the use of troops during peace time. The book covers at length the High Court case of Thomas v Mowbray3 and the ramifications, real and potential, of that case for the Australian Defence Force and the extension of powers.

The author covers areas where the military have been more recently used in civilian areas within Australia such as the Sydney Olympics, the Rugby World Cup, the Melbourne Commonwealth Games and the Northern Territory Aboriginal Intervention.

Topically, the navy are being used in relation to asylum seekers and the author specifically refers to and analyses the Tampa operation and the subsequent legal proceedings associated with it.

The book also covers at length the “War on Terror” which has been conducted since the attacks in New York and Washington in September 2001.  It comments upon the way in which the Australian Defence Force is increasingly becoming more integrated with civilian counter terrorism structures4. The author also specifically addresses the role of the Australian Defence Force and its deployments in the Middle East and the Pacific, especially, in the post 9/11 context.

Professor Head examines the significant impact the relatively new legislation has had, generally, upon the rights of the individual and the further ways in which it might impinge on those rights.  The legislation bestows expanded powers upon the ADF including the use of lethal force, interrogation of people and powers of search and seizure.  The author specifically comments that many of the powers go beyond those possessed by civilian Police Forces.

The book is a very useful analysis of important aspects of the way in which governments, both in Australia and overseas, have used the “war on terror” to erode human and legal rights5.

This book would be of interest to academic, military lawyers, and students.  It would also be of interest to persons concerned about progressive incursions by government upon the human rights of citizens. That, perhaps, should include all of us.

At a price of $45.00 direct from the publisher or recommended retail price of $49.95, this book at 256 pages presents excellent value for money.

Michael Head is the Associate Professor School of Law in the University of Western Sydney.  He is an expert on military callout law. A profile of Professor Head may be found at  http://www.uws.edu.au/law/sol/academic _profiles/michael_head