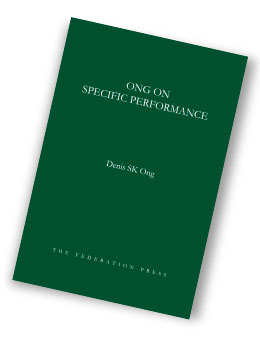 Ong on Specific Performance, as the title suggests, deals exclusively with the principles governing the equitable remedy of specific performance.

Professor Ong is no doubt already known to a number of practitioners, being the author of Trusts Law in Australia, now in its fourth edition, as well as Ong on Equity.

Professor Ong’s latest work adopts the same style as his earlier work - an in-depth and insightful analysis of the principles arising from the leading Australian and UK decisions in this area.  Helpfully, the text extracts the key passages from those decisions. Professor Ong also sets out his own views - which are sometimes critical, but always considered - of the reasoning in those authorities.

Chapter 3 deals with situations in which the Court will refuse to order specific performance, with particular attention given to the enforcement of express negative stipulations in contracts of personal service. The (often difficult) distinction between the doctrine of proprietary estoppel and part performance is the focus of chapter 4 (the latter being part of the wider doctrine of specific performance). Chapter 5 then considers the issues that arise where a Plaintiff seeks specific performance and, alternatively, common law damages, in the same proceeding.  Finally, chapter 6 discusses the authorities ruling out “hardship” as a defence to a claim for specific performance.

In conclusion, although the work is relatively brief at 172 pages, Ong on Specific Performance is a good text which is available at $115 direct from the publisher. It would be a welcome addition to any chambers’ library.