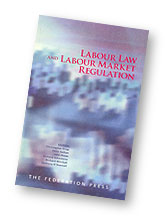 For those who practice in the area of Employment Law, it will come as no surprise that the field is complex and diverse. Employment lawyers must be across such jurisdictions as anti-discrimination, contract law, industrial relations, constitutional law, administrative law, and torts law to name but a few. Given the diversity that exists within the discipline, there are surprisingly few textbooks devoted to the field of Employment Law.

The Federation Press has once again produced a fresh alternative to the standard textbook. This book is a collection of papers organised around the theme of how the law regulates labour markets in Australia. Divided into 5 parts, the book allows the editors to attempt to develop an underlying theory of regulation of the labour market, in itself, a significant endeavour.

Taken as a whole, the book is not really a practitioner text. Rather, it provides a comprehensive analysis of the evolution and regulation of the labour market in Australia. In addition, it provides useful analysis of the policies and theory behind labour market regulation. Indeed, some of the contributors take an unorthodox approach casting players in the labour market in the role of de facto regulators. For example, one would not ordinarily think of the trade union movement as a regulatory body. However, in chapter 14 the authors make a convincing argument to the effect that trade unions do, in fact, operate as regulators, particularly, with regard to wages and conditions. There is also a chapter examining the regulation of unfair dismissals comparing the Australian experience to that in the United Kingdom. The authors demonstrate how the common law jurisprudence has developed a parallel to the statutory unfair dismissal regime. In the light of recent changes to unfair dismissal laws, this may become a fertile ground for the future development of Australian common law jurisprudence.

Part one considers the underlying purposes of regulation by examining the historical factors that underpin the Australian labour market. The section examines the historical impact of protectionism, arbitration and collective bargaining. The authors also examine various groups such the Business Council of Australia, the HR Nicholls society and the National Farmers Federation, all of whom have had significant influence on the policy and development of labour market regulation in Australia.

Part two discusses the various labour market institutions and how the market has been regulated in the past. Specific issues discussed include the regulation of enterprise bargaining and the role of groups such as employer groups and trade unions. The evolution of employment agencies from their beginnings in the late 1800s through to the development of the Commonwealth Employment Service and its eventual decline is also discussed. There is also a detailed analysis of the role of labour hire companies and the regulatory approaches that have been adopted since their emergence in the late 1980’s. Labour hire companies represent an emerging challenge for labour law and their regulation remains a difficult policy issue.

Part three, bearing the unusual title of “Constituting the Labour Market”, attempts to define the market in a number of different ways. The authors also examine alternative policy tools used in labour market regulation such as social security, tax and immigration policy, all of which indirectly impact on the make-up of the labour market. Chapter 24 includes a discussion of the regulation of professions within Australia, including examining the rationale behind the delegation of regulatory authority to professional bodies. Although the legal profession is not specifically examined, this area is, no doubt, a matter of particular interest.

Part four examines a number of disparate issues in labour market regulation. Included is a detailed analysis of the emerging issue of whether a term of good faith and fair dealing can be implied into the employment contract. Recent changes to the Workplace Relations Act 1996, particularly, with respect to unfair dismissals, suggest that there may be scope for the development of Australian contract law along the lines followed in the United Kingdom.

The book concludes with a chapter that examines the future challenges of labour regulation.

On the whole, the book would make a useful addition to those interested in understanding how the Australian labour market has evolved and how it has been, and is being, regulated. Those with an interest in policy development and regulatory theory would also find the book a worthwhile read. 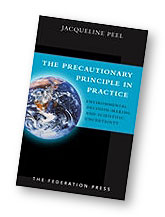 The Precautionary Principle in Practice: Environmental Decision-Making and Scientific Uncertainty

The “precautionary principle” is found in several important pieces of Queensland environmental legislation as well as in the laws of many other jurisdictions. For example, section 1.2.3(2) of the Integrated Planning Act 1997 (Qld) adopts the national approach by defining it as a principle “that lack of full scientific certainty should not be used as a reason for postponing a measure to prevent degradation of the environment if there are threats of serious or irreversible environmental damage.” It has featured in some notable court decisions (s uch as Leatch v National Parks & Wildlife Service (1993) 81 LGERA 270 (NSWLEC) per Stein J). While it rarely seems decisive in government or court decisions it is an important principle of modern environmental and health laws.

Jacqueline Peel’s new book is a very well-written account of the precautionary principle and its application in international and Australian courts. A particular feature of her work is her ability to synthesise and explain complex scientific and legal issues.

The book is divided into three parts. Part 1 explores uncertainty in the decision-making environment and includes a succinct and very useful explanation of uncertainty in science. Part 2 considers the practical difficulties of anticipating threats of damage and uses examples from fisheries management and mobile phone towers. Part 3 considers how to implement precaution in decision-making frameworks and practice using examples of genetically modified organisms and environmental impact assessment.

Lawyers, judges, government officials and scientists who are required to apply the precautionary principle in practice will find this book a very useful reference.