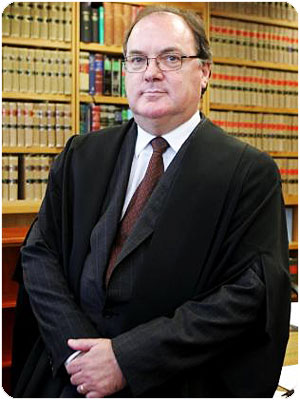 It is a privilege to speak at your Honour's swearing in as the Chief Justice of the Federal Court of Australia.

Your Honour was always a shining light of the Queensland Bar, pre-eminent amongst us.

You were not long admitted before you developed a large practice in commercial and constitutional law. You were much sought after by our busiest and mot successful silks and you appeared many times in the High court led by the likes of Jackson QC, Davies and Thomas of Queens Counsel and, often for the Attorney-General for the State of Queensland, by de Jersey QC. In the important trade practices case of Queensland Wire Industries and BHP, your Honour appeared as junior to former Chief Justice Murray Gleeson and Byrne QC, now theSenior Judge Administrator of the Supreme Court.

Locally, your Honour had a wide ranging practice in and out of Court. Of note was your enviable retainer for the Proprietary Sugar Millers Association, for whom you appeared each Winter led by Hampson QC before the Central Sugar Cane Prices Board sitting in sunny regional Queensland.

As Queens Counsel Your Honour was one of those to whom juniors always looked but you gained a reputation for being one of the few to engage when an appeal looked particularly tough. "Perhaps we should get Keane" was often said by the junior bar, resigned as they were to the meagre realities of the case but ever hopeful Your Honour could find a way to rescue it. It never occurred to us at the time that Your Honour might not necessarily have wanted these most difficult of appeals, but you took your instructions manfully and found challenge in the contest. And you did so in a way which inspired confidence in your team. You had that ability, characteristic of truly able leaders, to absorb the uncertainties and pressures of the cae rather than deflect them.

Your Honour was a natural force at the Bar. Not only did Your Honour posssess outstanding scholastic ability, but you had the force of personality, the skill in advocacy and the capacity for devotion to duty truly to distinguish you among your peers.

Your Honour is unpretentious and modest notwithstanding your singular talent. You have never been one overtly to seek advancement or promotion yet your appointments to the Court of Appeal and now to the Federal Court have seemed the most natural of progressions. From the perspective of those who worked with you, your advancement was always assured. That that should be so is a consequence of much more than your ability as a lawyer. Your Honour has, it has seemed to me, an acute intuition into the character and the strengths and the nuances of those around you.

No-one here who knows you can have any doubts that Your Honour will be a strong, effective and popular leader of this Court.

The Queensland Bar takes great pride in Your Honour's appointment.

You are one of our very best.

We wish you well.