The books of the joint winners of the first Holt Prize ever awarded – Giovanni Di Lieto from Monash Business School, and Scott Stephenson from Melbourne University School of Law – will be just the first of many more proofs of why.

Unless Chris Holt and his co-founders of The Federation Press, Kathryn Fitzhenry and Diane Young had taken the bold step in 1987 of establishing Australia’s own, independent, high quality publishing house for legal, social and academic books, there is no telling how much important scholarship may have never been published – either at all, or with the impact it has had.

Not because these works were any less in quality or significance than those published by other major, typically overseas-owned legal and academic presses. In fact, the reverse. Chris Holt was dedicated to publishing the best research, scholarship and analysis of the technical and political issues surrounding almost every area of law and legal policy important for modern Australia. He was equally dedicated to supporting the often previously-unpublished scholars who were producing this cutting edge work – like all entrants to the new Holt Prize.

While books also had to sell, he and his partners knew a smaller, independent publisher could apply its own tests, free of the need to deliver a particular profit margin to a parent institution or company on the other side of the world. As Tony Blackshield told the assembled crowd at the awarding of the first prize last Wednesday, it became the magic of The Federation Press to use the reasonably-selling textbook market to support publication of other, niche but vital, books on smaller print runs than most commercial publishers would ever contemplate.

These are all factors that enabled high quality publications on a myriad of vital legal and social subjects that otherwise may never have seen the light of day, or not for years after their topicality had morphed or faded. Migrant Labour Law: Unfolding Justice at Work in Free Markets , by Di Lieto and F rom Dialogue to Disagreement in Comparative Rights Constitutionalism , by Stephenson, continue in these fine traditions. Everyone who heard High Court Justice Stephen Gageler explain the judges’ choices will be watching the careers of Di Lieto and Stephenson very closely… along with the runners up, Yee-Fui Ng from RMIT and James Watson from the New South Wales Bar.

Chris Holt was also Australia’s best legal publisher for other reasons. His personal values of social justice and intellectual inquiry, and vision of the need for the law to adapt and for the relations between law, politics and society to be exposed and critiqued, flowed through into the hundreds of titles published under his watch.

What he contributed, not only by choosing those works but by helping many rising authors to craft and edit them for maximum impact – applying his own standards of intellectual integrity – was second to none.

My own experience of just how good Chris Holt really was came about when I was selecting who should publish my biography of Michael Kirby, a great Australian and the nation’s most famous modern judge (Michael Kirby: Paradoxes & Principles, The Federation Press, 2011; paperback 2013). Some books don’t have to struggle to attract publishers’ attention, and this was one. Indeed, I was wined and breakfasted by the commissioning editors of several of the big houses, in various cities.

But then I met Chris Holt, and two things happened. First, he did not want to simply get his hands on something that what would clearly sell well, even if mediocre. Better than anyone else I had talked with about the project, he grasped what it could and should be, from the outset. He wanted it to be a great book and laid out a challenge for how to make it one. Clearly, he had no confidence (yet) that I could do it. I liked that challenge.

Second, he had the nous to recognise that given the market, The Federation Press could afford to do a bigger print run on the first edition than the other publishers were proposing, and hence, could offer me a bigger advance … which I needed to help fund the research. So Chris Holt not only out-thought the competition – without even trying, since he was just being himself – he also outbid them on their own commercial terms. These are reasons why I know, personally, that he was the best. And that was before we even got started on the book … a process in which Chris Holt ended up being to me, what Katharine Graham of the Washington Post was to the Watergate journalists, Bob Woodward and Carl Bernstein. (Young people can google them up.) The rest is history, and at the award ceremonies for the Walkley Book Award, the National Biography Award and the Prime Minister’s Literary Awards, of which we made all the short-lists, there was no question in my mind that I’d chosen the best publisher.

At $12,000, the fact that The Federation Press has created the biennial Holt Prize as the richest legal book prize in Australia makes it an even more fitting tribute.

As The Federation Press continues to grow and expand its range beyond the law, into more areas of social and political history and inquiry, there is no doubt Chris Holt would – and should – be quietly proud of his legacy, in his own quirky and self-effacing way. Chris Holt not only changed the publishing landscape of Australia through the ideas, knowledge and debates that his publishing gave to legal and political discourse, he helped change Australia itself, and will continue to do so for many years to come – all for the better. 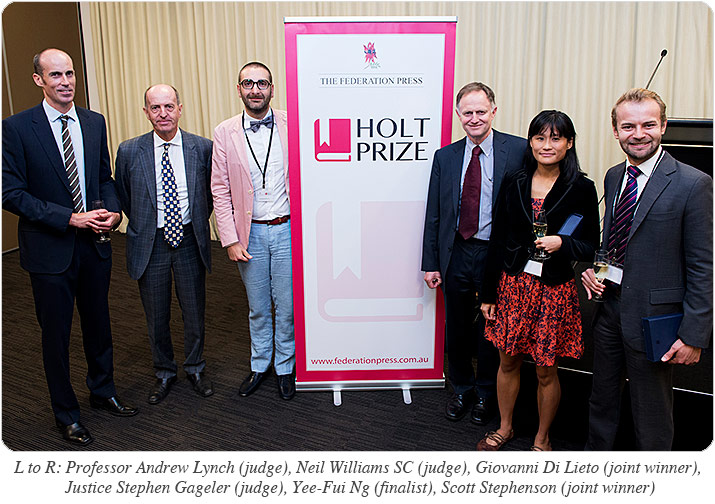