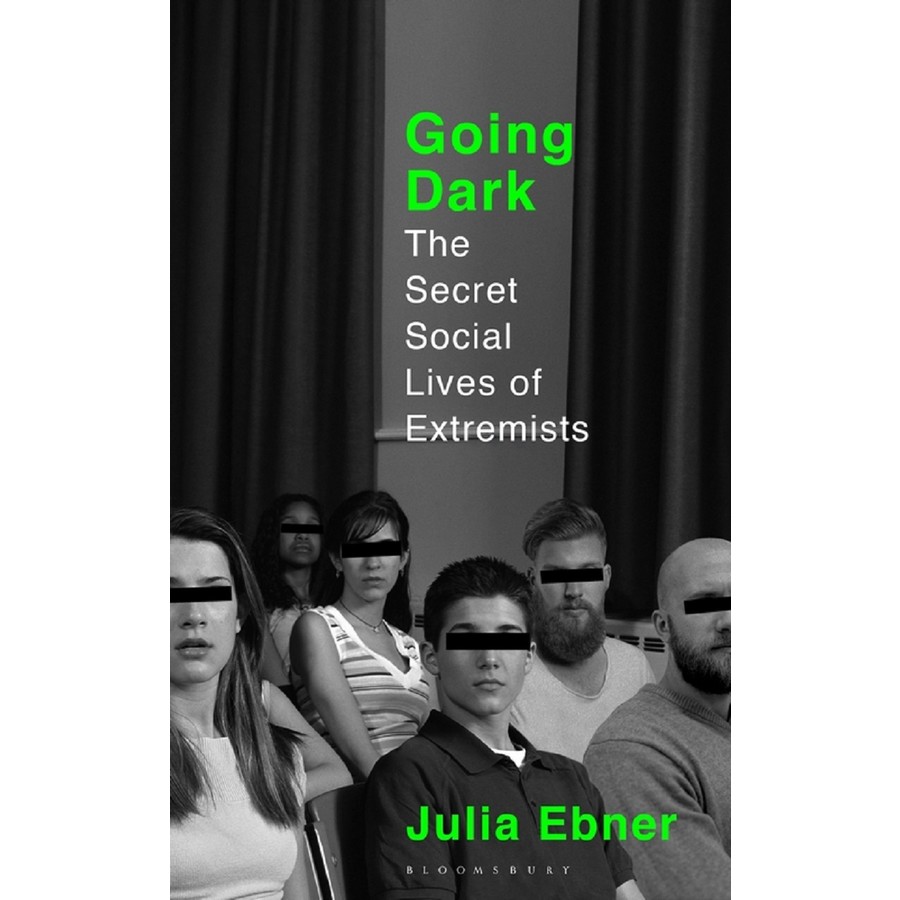 This wise and brave account by a young woman, of her undercover meetings with extremists, crosses boundaries.

The necessity to deceive, to gain access, for the purpose of exposing the subject matter, evidently weighed with her and her publisher:

“Does that make me a hypocrite?  Possibly.  But I am convinced that to counter extremists online, we need to understand their drivers, expose their tactics and predict their next steps.”  (Page 284)

This was not only a moral dilemma.

Blagging your way into a planning meeting with extremists, in person, with a blonde wig, false name, and rehearsed cover story as your disguise, must have required more than usual bravery.

The wheels almost come off during some real-life meetings.

Ebner has put herself in real danger. She is quite conscious of it. In a recent interview, she said she is doing no more “in person” research. (Auckland Writers’ Festival, webinar,19 July 2020)

The arc of this book, a well-designed series of connected essays, takes us through recruitment and socialisation, demonstrates the manipulation of the online world and mainstream media through communication, and then takes us further.

Ebner demonstrates the unexpected connections that radicals have formed around the world, perhaps on the basis that “my enemy’s enemy is my friend”.

She explains how conspiracy theories are propagated, sowing discord, and leading readers toward unrelated extremist views.

Under the heading “Mobilisation” we witness the online plotting of the Charlottesville riot. Extremists are image conscious. Fat extremists are told to stay home.  Those attending are told to look like ordinary Joes, right down to what hats to wear.

This is no disorganised rabble. This is dangerous, mobilised, malign.

I thought the most dangerous thing recounted by Ebner is her attendance at a music festival. She meets random people in the line, in the bars and in the merchandise tent.

By this stage, Ebner (ever present in these narratives) signals her lack of connection with the unpleasant and dangerous people she encounters.  Such honesty must signal that there is only so much she can understand and thus convey.  But this book is a very fair attempt!

Under the heading “Attack”, Ebner deals with the endless war by hackers, of various persuasions. Here, her mastery of making the technical accessible to average readers comes to the fore.

As she brought her work on this book to completion, a massacre occurred in the Pacific region.

This terrible event exemplified so much she had written in prior chapters, including gamification, connections with others online in a dark world, the trolls who commented and encouraged, and those who repost endlessly in a war with take-down robots.

This brief chapter brings this part of her account together, a culmination of terrible people and ideologies.

I feared that her next section entitled “Is the future dark?” might become preachy.

It is actually written in the most engaging and practical way.

Ebner is strategic. You must look some years out, and anticipate what might happen, if you are to try to take effective action now.

Thus, she draws together expert opinion about the future, and then prescribes concrete action, to avert a darker future.

I learnt a lot from reading this book. We hear about attempts to manipulate elections and politics, and we hear about mad rumours on the internet. I now understand something of the purposes and methods behind this activity.

Why is this such an important book?

I leave to one side the excellent quality of the writing, and the intimate reflections about Ebner’s encounters with extraordinarily dangerous people.

These are important elements in making the subject matter accessible to the general reader. But they are not the clue to why the book is so important.

An objective of both State and non-State actors is to cause chaos and discord in democracies, by planting divisive stories. These are picked up online and through the mainstream media. It is not accidental to whom this happens. All this has been understood for some time.

It is the mechanics of this, and what drives the armies of keyboard warriors and trolls, that is fascinating.  And is the key.

Ebner does not see the solution to this as being wholly technological. There must be a social aspect to any solution.

Hence, she is interested in the social lives of these armies of people.

To do that, she joins meetings with a range of dreadful people, to try to gauge the attraction, and learn the practical methods employed to manipulate the online world and (ultimately) mainstream media and elections.

She drew the line at participating in the criminal (reporting concrete threats and crime to police).

The way she has done the research has given us access to the very words being spoken by those online, or in live meetings.

And we see in detail how appalling people set out each day to destroy democracy, with hate, lies and fear.

One criticism of the book, which I saw, was that Ebner squibbed some discussions, or did not go to the next meeting in a series to which she had access.

This cannot be a criticism. Ebner was sedulous not to break any law (for example carrying genuine identification papers for the police, even when otherwise operating under a false name). Sometimes, pure disgust or the danger of the situation prevented further engagement.

This is such an important book. This young author writes well and has done a brave thing for the benefit of civil society.