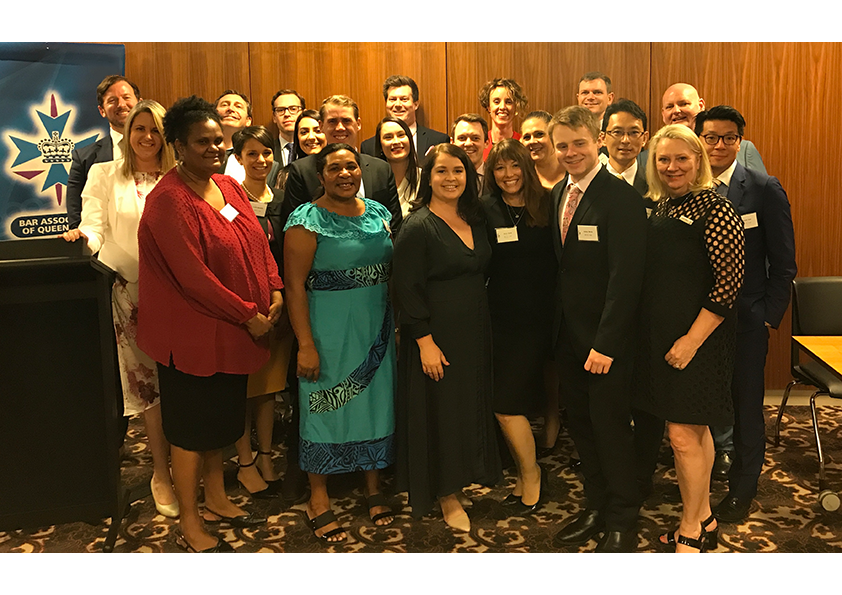 The six (6) week course comprising of oral advocacy, written advocacy, alternate dispute resolution and ethics would not be possible without the support of the 129 presenters from the profession who generously volunteer their time. For BPC73 this included 17 members of the Judiciary, 3 retired members of the Judiciary, 26 Queen’s Counsel, 72 Junior Barristers, 1 Solicitor, 3 Librarians, 6 Financial Partners and 87 witnesses including 12 Police Officers.

Pupil Jane Menzies has provided her reflections of the course and first few months at the private bar:

The forming stage saw us come together in late August, a rabble of 20 solicitors with vastly different backgrounds from across the State and Papua New Guinea. A brief round of introductions on day one was swiftly overtaken by a wealth of information delivered in the first two weeks by sitting and retired Justices, leading senior and junior counsel, baby barristers, and partners of prominent law firms. The generosity of so many busy people to give up their time for us was remarkable. It was a fine demonstration of the collegiality of the Bar and the broader profession.

Of “collegiality”, I can say that it was the most frequently uttered expression on the course, together with “persuasion” and “case theory”. We heard some other memorable quotes. “What you have here, my dear, is a dog.” “Read the Act stupid!” “Write your advice knowing that you may be asked to make it come true.” And, from one presenter, opening words to the effect that “You shouldn’t expect much because in the toilet just now I realised that I’d put my underpants on backwards.”

Many of these we heard during the storming stage, as the pupils started to figure one another out. Personalities emerged and we identified the serial question-askers, the prolific note-takers, the social convenors, the funny guy, the talkers, and the quiet and unassuming types. With that social manoeuvring going on, we were also coping with the onslaught of feedback on our written and oral advocacy. There were so many pitfalls for us to collectively fall into:

Fortunately the course provided a safe place in which to make, and learn from, these mistakes.

We flew into the norming stage as the intensity of the mock hearings ramped up. Fortunately a senior silk assured us that “99% of cases that come in at the Bar, anyone can do well with hard work.” That gave us hope. We continued to absorb the finer points of a barrister’s artistry, including the importance of using size 14 Calibri font for speaking notes. I was surprised to hear that there was research to support the point. A highlight of the course during week 5 was the video review session of our mock 4 hearing. While excruciating to watch your own performance played back, the insights that the exercise provided were invaluable.

Finally we performed. The advocacy intensive weekend and mock 6 were true to label: intense. As had been the case throughout the course, busy members of the profession dedicated weekends and evenings to guide us with patience and good humour. There was a real sense of achievement upon finishing the final mock and receiving our certificates of completion. We had survived (with only one broken bone to show for our efforts)!

So we have now moved into the mourning stage with the formative six weeks of our new careers behind us. It was a whirlwind ride that will hold us all in good stead for what life brings next, both in terms of the lessons learned and the friendships formed. We extend our thanks to all those who presented and otherwise contributed to the course and, particularly, to Brooke and Gail for guiding us all through it. And now we have some of our own “war stories” to share with the cohort of BPC74…