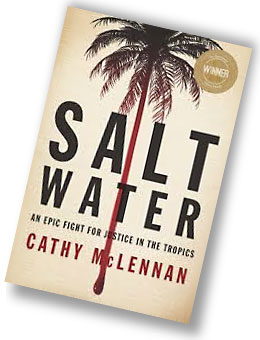 Saltwater is the powerful and compelling story of Queensland Magistrate and author, Cathy McLennan, during her first years as a barrister in North Queensland working for the Aboriginal and Torres Strait Islander Legal Service.

The book is a memoir, but has the style and suspense more commonly found in crime novels. The narrative centres around the trial of four Aboriginal children from Palm Island charged with murder. One of the children, at the age of 12, was the youngest child to be charged with murder in Australia at that time. Much to her surprise, McLennan is handed the case after being at the Bar only a few days.

The other central character is the young Olivia, who forms a strong bond with the author as she drifts in and out of detention.

Through her work on the murder trial and her numerous encounters with Olivia, readers gain insight into the range of complex social and political issues experienced by the communities in Townsville and Palm Island. Given the investigations currently underway into treatment of children in youth detention centres, the book is a timely reminder of not only the harsh realities faced by children in the system, but also the underlying problems which led them there in the first place.

It’s no surprise that the book raises complex issues including physical and sexual abuse, violence including domestic violence, poverty and substance abuse, which continue to hamper marginalised groups in our society. However, what is unique about this book is that it gives readers the opportunity to form their own views about these issues by simply telling the story of the author’s experiences, the way she saw them at the time. As a reader, you’re truly able to walk around in McLennan’s shoes through the forthright account of her day to day life as a lawyer in Townsville. This entails what seems like endless court lists and a myriad of young lively characters.

I especially enjoyed being able to tap into the mindset of the author during her early career. There is one particular passage where, moments before court commences, the author is told one of the boys has been charged with murder. The author’s initial reaction is to apply for bail immediately, but she frantically seeks to determine whether this is even possible in the Magistrates Court. But it’s too late; court commences and the author’s left tossing up between looking like an “idiot” for applying for bail and really being an idiot for not applying, because of fear of what people will think of her.

Of course she attempts to apply for bail, much to the prosecutor’s amusement.

While such an anecdote seems trivial in the overall scheme of the book, it is but one example of how the reader is immersed in the author’s detailed thought processes. The overall effect is that the book feels very real. You feel the agony of every decision and the great sense of responsibility that the author feels, and we all feel, for our clients.

By introducing the reader to real characters, albeit fictionalised to protect privilege, the story highlights the disconnect between the overarching role of the court in administering justice and the unfortunate consequences that the system can bestow on some young people trapped in a cycle of neglect and violence, victims of their own circumstances.

However, the book does not profess to offer solutions, but rather asks questions which the reader can seek to answer for themselves.

The book was awarded the Queensland Literary Award in 2014. Hearsay was fortunate enough to receive a pre-release copy, for which we are very grateful. The book is now available publicly and I hope others are able to take a trip to the Tropics, if only through the book.