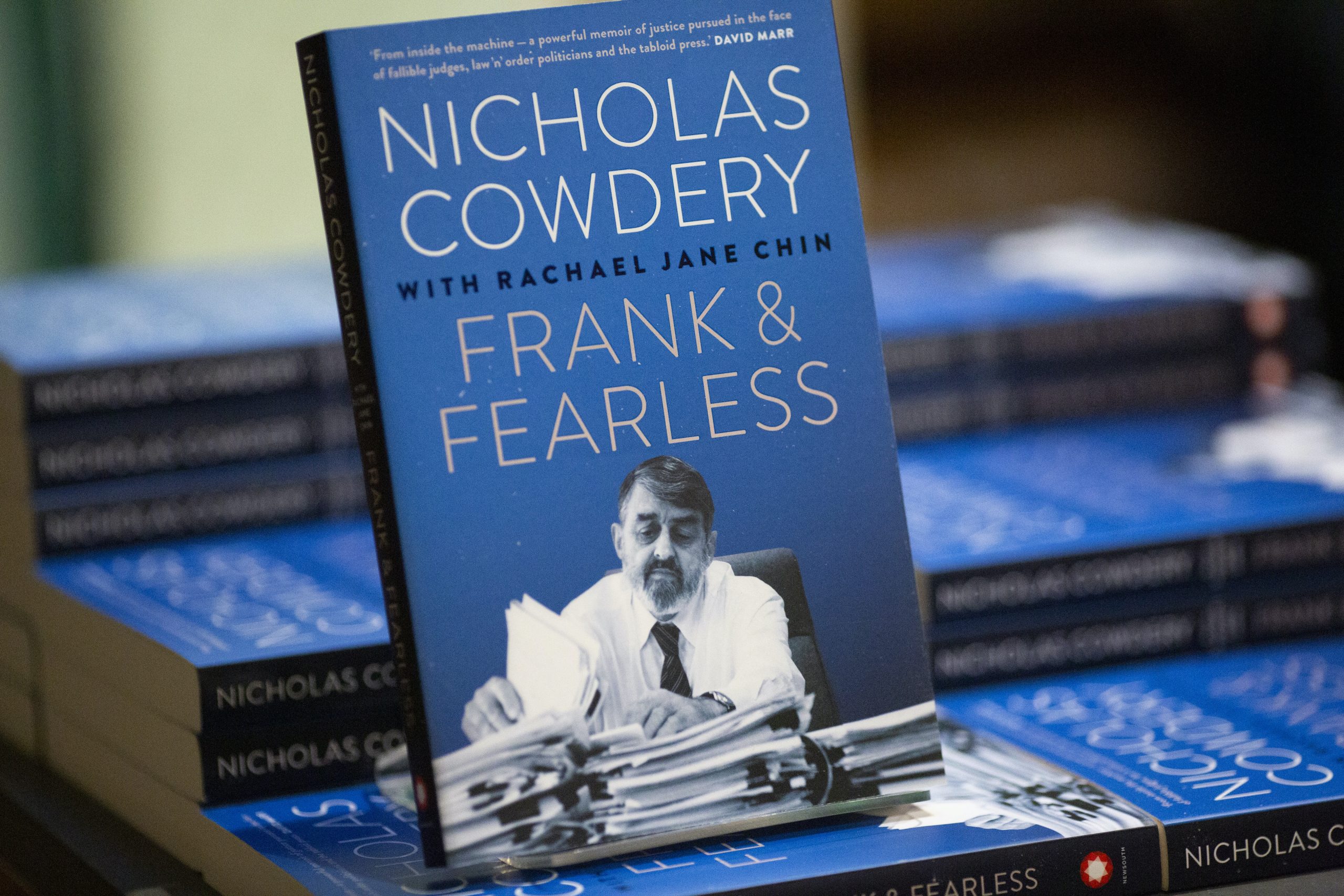 Nick Cowdery was appointed Director of Public Prosecutions (DPP) for the State of New South Wales in 1994. At the time of Cowdery’s appointment, the Premier of New South Wales was John Fahey and his Attorney-General was John Hannaford. Cowdery would grace the office for 17 years until 2011. His decision to resign was, effectively, forced by the ire of the then government,[2] with legislation passed and deliberately retained which would have deprived Cowdery of most of his pension if he had stayed in the role beyond his sixty-fifth birthday.

Cowdery’s career as a lawyer has covered most available roles. He worked as a public defender in Papua New Guinea in his first year of practice in 1971. He served as an acting judge from 1988 to 1990. He had an extensive practice at the private bar practising particularly in the areas of criminal law, administrative law and commercial law taking silk in 1987 and then served as DPP for 17 years.

Cowdery has written extensively on matters of law reform and legal policy including the earlier monograph, Getting Justice Wrong: myths, media and crime in 2001. Since 2011, Cowdery has continued working including by teaching prosecutors in developing countries around the world the principles and processes which align the role of public prosecution with the values of the rule of law.

Frank and Fearless, at one level, is the story of a number of interesting cases that crossed the desk of the DPP during the 17 years during which Cowdery was appointed to that office. At another level, Frank and Fearless is a story of the role of the DPP and the implications that it has for any person who is appointed to fulfil that role. In his introduction, Cowdery states that he knew that every decision he made would make somebody unhappy. If he decided to prosecute or appeal, the accused or the prisoner would feel aggrieved. But, if he exercised his discretion against taking action, victims and the supporters of punishment would, in turn, feel aggrieved. Cowdery also explains that, despite his normal human reactions to vexed situations that came before him, he was bound to make decisions, professionally, in accordance with the available evidence and the law.

So, at another level, Frank and Fearless, is about the dilemmas and the problems facing the criminal law. The interesting cases which feature illustrate those dilemmas in all their acuteness. The perspectives of victims and their families; the strengths and fallibility of expert evidence; the different light arising from circumstantial evidence; and the hard cases of assisted dying are workshopped by the cases featured. Cowdery manages to convey both the human and the responsible prosecutor’s perceptions of the facts at each point in the telling. He is also able to convey the perspectives of others, accused persons and victims, at all points in the narrative.

The title, Frank and Fearless, is well chosen. Frankness and fearlessness are required of all advisers and all decision makers. They are essential to those who provide legal advice or make legal decisions. They are essential to any person performing the role of DPP. Cowdery is probably the person most famous for displaying those qualities in the role of DPP for most of the readers of this book. He was a controversial DPP because he exercised the guaranteed independence of his office to make fearless decisions and he articulated the lessons he learned in the office to inform the public as to ways in which the laws could be improved. Cowdery understood the emotions of the families of victims but he never let public criticism deter him from honestly exercising the role of the office or from making the correct decision on his assessment of the evidence and law.

Frank and Fearless is, therefore, an insider’s account of a turbulent period in law and politics. Cowdery explains his decisions and his actions and there is no doubting that the book justifies his actions and condemns many of those politicians and journalists who chose to attack him and to obstruct his work. Cowdery, however, eschews anger. His account of his time in the office and his work carries with it a sense of calmness and a feeling that, however strongly the author may disagree with others’ actions and words, he can still empathise with those others and understand the emotions that cause them to take a particular course.

Several cases involving different examples of assisted dying highlight the complexities of using the existing law to achieve a humane result but also the need for careful law reform in the area.

The principle that no one is above the law is showcased in the prosecution of Patrick Power SC, Cowdery’s deputy director at the time of his arrest, for possession of child pornography, and the prosecution of Minister of the Crown, Milton Orkopoulis, for child sex offences. The case studies, however, also show the pressures that come from many directions when a high profile person is suspected of having committed criminal offences.

The ultimately unsuccessful prosecution of Gordon Woods for the murder of his girlfriend, Caroline Byrne, raises the dangers of over zealousness on the part of a Crown Prosecutor.

Cowdery’s co-writer, Rachel Jane Chin, is a lawyer and a journalist as well as a documentary writer having published a book in 2011 on one of the cases discussed in Frank and Fearless, the successful prosecution of fringe national water polo player, Keli Lane, for the death of her missing baby, Tegan.

As an outsider, the reader will have little opportunity to discern exactly what the co-writer has contributed to the work. One might suspect, however, that the professional author, Chin, may have assisted with the structure of the book in which a topic is dealt with in a chapter, apparently, to a settled conclusion with the suspect either convicted or not pursued only to have the same case emerge afresh in a new chapter when an appeal or a fresh evidence discovery has thrown a new light on the case and re-awakened the narrative and re-focussed the issues to which the case gives rise.

In one sense, Frank and Fearless is a must read book because its principal author has made a great contribution to public life in Australia and his perspectives are very valuable. But, between them, Cowdery and Chin have produced a fascinating narrative in which important lessons are woven without diminishing for a moment, indeed, enhancing the entertainment value of the work.

Frank and Fearless comes highly recommended from this reviewer.

[1] Imprint of University of New South Wales Press Ltd
[2] The Attorney-General of that government was John Hatzistergos, now a judge of the NSW District Court. The premier was Kristina Keneally.