A River with a City Problem 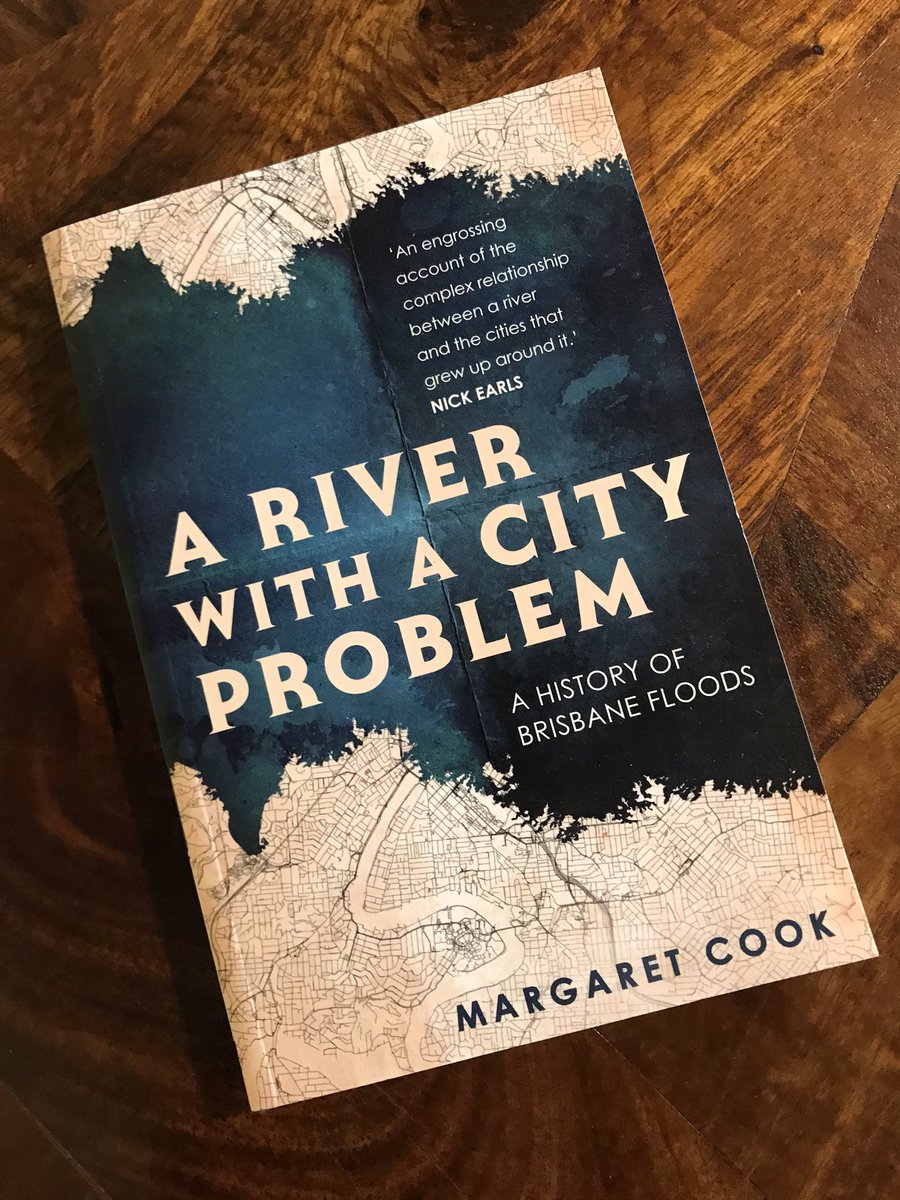 A River with a City Problem

A River With a City Problem (“River”) is the thought-provoking title to Margaret Cook’s history of the symbiotic relationship between the City of Brisbane and its eponymous river.

Consistent with the author’s career as a historian, River follows a broadly historical narrative. Cook begins by detailing the deep spiritual and also practical connection the Turrbal and Jagera people had with the river, relying on it for water and food: mullet, flounder, crabs, shellfish and water birds[1]. 1823 heralded the discovery of the then unnamed watercourse by explorer John Oxley, on instructions to traverse north to locate a new penal colony for the New South Wales Government[2]. Oxley named our river after then NSW Governor Sir Thomas Brisbane, the naming of the city coming some time afterwards[3].

Matters proceeded apace, and were not delayed by the relatively unknown 1841 flood. This writer’s own tome about the propensity of our river to flood, Tennyson Breach (“Tennyson”) made mention of the conventionally recognised Big Three floods: the enormous 1893 flood, followed by the Australia Day 1974 event and, of course, the 2011 flood that remains etched in our memories, given its comparative contemporaneity. I am hence indebted to Cook for her chronicling of the 1841 flood: ‘Although records are scarce’, Cook cites an 8.43m flood height in 1841 at the city gauge[4]. If so, such would have quite substantially exceeded the city gauge heights of 1974 and 2011 of, respectively, 5.45m and 4.46m[5].

Even more intriguing in this respect is Cook’s reference to an observation in May 1770 by Captain James Cook’s botanist Joseph Banks of a ‘dirty clay colour’ in Moreton Bay waters[6]. Such would infer a large flood, especially given this writer’s recollection of press photos taken of Moreton Bay almost becoming Mud Bay as the 2011 floodwaters finally receded to sea.

This being the case, one may conclude that the Brisbane River has flooded substantially at least 5 times during the years 1770 – 2011.

The concept of ‘taming’ the Brisbane River forms Cook’s third chapter. Barely had the inundation wrought by the 1893 flood subsided that the demands of angry Brisbanites for structural solutions to prevent a repeat began[7].

Not that anything happened particularly quickly; indeed, it was only after ‘decades’[8] that the Bureau of Industry Amendment Act 1934 was enacted and a Stanley River Works Board empanelled to begin construction of what would become Somerset Dam, completed 18 years later in 1959.

Of course as we all know, and notwithstanding Somerset Dam being by then extant, in ‘January 1974, the river reclaimed its floodplain’[9]. A cyclone named Wanda crossed the coast near Gympie on 24 January 1974, quickly degenerating into a rain depression dumping a full 314mm of rain in Brisbane on 26 January 1974 alone[10]. What we don’t all know however is that the concept for the subsequently constructed dam – Wivenhoe – had actually spawned in the 1960’s and was followed up by a Coordinator General commissioned feasibility study in 1971. Wivenhoe was not therefore an idea conceived entirely reactively from the 1974 event. To the contrary, Wivenhoe’s primary purpose was water supply, with a secondary pretext of a limited hydro-electric generation capacity[11].

Not that these details prevented then premier Sir Joh Bjelke-Petersen declaring at Wivenhoe’s official opening on 18 October 1985 that he ‘doubted if the 1974 flood could occur again because the dam would absorb an enormous quantity of water before any had to be released’[12].

Prophetic words indeed from the Premier who also doubted that the Fitzgerald Inquiry was necessary[13].

Cook’s recitation of the gestation then completion of Wivenhoe Dam heralds discussion of that dam’s first major test: the substantial rainfalls between September 2010 and January 2011, including official readings between 9-13 January 2011 of 480mm at Wivenhoe and 370mm at Somerset[14]. Enormous as these totals were, and as this writer himself postulated[15], it was not solely due to the ‘unprecedented releases’ from Wivenhoe Dam but ‘substantial contributions from the uncontrolled Lockyer Creek and Bremer River racing towards the capital’[16] which created the loss and damage wrought to so many Brisbane suburbs during those difficult January days in 2011.

If there is a singular theme to Cook’s work, it is her repeated invocation of ‘the floodplain’ to describe areas adjacent to the Brisbane River and its many associated tributaries. Cook in turn develops a subsidiary theme: an imprudence to develop in such areas thesis. Cook prints rejoinder arguments from persons with interests contrary to her thesis, such as the Johnston Dixon real estate agency’s view that ‘neither the Brisbane nor the Bremer River caused the devastating 2011 Brisbane Floods; that neither did Wivenhoe nor Somerset Dam cause….[rather] the blame lay squarely…at the feet of those charged with their management’[17].

This writer disagrees with Johnston Dixon’s argument: in 2012 I, identically to Cook, cited the vast amounts of waters which so devastated the Tennyson Reach apartment complex the direct subject of my work. In so doing I noted the feeding into the Brisbane River downstream of the Wivenhoe Dam floodgates of (in geographical order), Lockyer Creek, the Bremer River and Oxley Creek. All three of these systems intersect with the Brisbane River downstream of both the Somerset and Wivenhoe Dams and hence contributed flood waters to Brisbane wholly independently of any acts or omissions of engineers tasked with those dams’ operations[18].

At this point in the review it is apposite to note the recent handing down of judgment in the colloquially named 2011 Floods Class Action: in finding against the State of Queensland, Queensland Bulk Water Supply Authority trading as Seqwater and SunWater Limited, Justice Beech-Jones of the NSW Supreme Court noted, in respect of the oft-quoted ‘Manual of Operational Procedures for Flood Mitigation at Wivenhoe Dam and Somerset Dam’, that it ‘designated a flow rate of 4000m3/s in the Brisbane River at Moggill as the threshold point at which homes and businesses downstream of the [Somerset and Wivenhoe] dams would commence to be flooded'[19].

His Honour then concludes '....to a significant extent the large increase in outflows from Wivenhoe Dam coincided with large outflows from Lockyer Creek and the Bremer River. The peak flow rate experienced at Moggill …. on 12 January 2011… was between 10,420m3/s and 10,700m3/s, of which between 4200m3/s and 5300m3/s was attributable to releases from Wivenhoe Dam.'[20]

The upshot being that, if we assume no water at all was released from Wivenhoe Dam, and therefore subtract the Wivenhoe induced peak of 5300m3/s from the bottom range of the flow measured at Moggill, the Moggill flow rate caused solely by waters delivered by the Bremer River & Lockyer Creek would have been 5120m3/s.

As a result, not insubstantially exceeding the minimum 4000 cubic metres per second ‘threshold point at which homes and businesses downstream … would commence to be flooded.’

And, as a further result, disabusing the ‘taming’ the Brisbane River concept Cook’s third chapter introduced.

Ultimately Cook decries ‘a well-travelled path: reliance on Wivenhoe Dam underpinned by an ongoing belief that floods can be tamed with a technocratic solution’[21] in opining that ‘[F]uture floods are inevitable’[22].

Cook ends River by exhorting us to ‘foster a harmonious relationship with the Brisbane River, as the Turrbal and Jagera people have for centuries. Perhaps in time we will accept that it is a river with a city problem and not the other way around’[23].

River is an excellent work, researched and referenced with meticulous detail and written by a writer whose passion for the subject is obvious yet who never loses objectivity in the process. I highly recommend a read of this book.

Book Reviews
A River with a City Problem
SEE ALL