The Statutory Foundations of Negligence 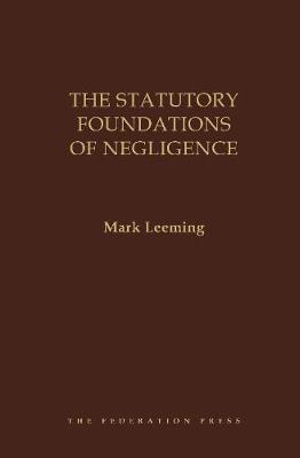 The Statutory Foundations of Negligence

The twentieth century saw a significant expansion in the scope and effect of statute law. As a consequence, a landscape once occupied by the courts is now shared with the legislature. One result of this development has been an impetus to understand and explore the interaction between judge-made law and legislation emerge as an important focus in case law, extra-curial writings and commentary. The Statutory Foundations of Negligence by the Hon Mark Leeming is an important contribution in this area, and takes its place, thematically, alongside other works published by The Federation Press, notably, Public Law in the Age of Statutes, edited by Anthony Connolly and Daniel Stewart (2015).

A central theme of The Statutory Foundations of Negligence, and a familiar one at least at an intuitive level, is that judge-made law in many, but not all, areas of the law of negligence today is a response to legislation introduced as a response to earlier decisions. Here, the author offers as an important, but not the only, way of conceptualising the relationship between judge-made law and legislation a metaphor of ‘entanglement’, drawing on the field of quantum physics where it refers to the interdependence of two particles, information about one of which cannot be imparted in full without information about the other.

The author disavows any attempt to identify every point of interaction between the law of negligence and statute law.  Instead, the author chooses to focus on select points of contact to illustrate the theme of entanglement and to show the depth of influence of statute law on the common law and the varieties of ways in which the two sources of law interact. The points of contact discussed are, notably, duty, breach, causation and damages and the doctrines of contribution, vicarious liability and contributory negligence.

In addition to chapters on duty of care, breach, causation and contributory negligence, the work includes chapters surveying aspects of the interaction between judge-made law and statute law on road authorities and aspects of the law of damages, specifically, cases of multiple defendants, pure mental harm and personal injury, generally.

The work also includes a note that draws on and develops the author’s reflections on jurisdiction in earlier writings, namely, Resolving Conflicts of Law (2011) and Authority to Decide: The Law of Jurisdiction in Australia (2012) both also published by The Federation Press. In these, the author explores the interaction between the common law and statute law on jurisdiction and the application of statutes and identifies exceptions to the general rule that, in an action in negligence, it will quite commonly be clear that federal jurisdiction has not been invoked.

This exploration of the foundational role of statute law in the common law of negligence, at a conceptual level, fills a gap in earlier treatments of the law of negligence. In doing so, The Statutory Foundations of Negligence, by dealing with the interplay between statue law and judge-made law, does not offer a comprehensive reference source.  One result is that practitioners seeking guidance on a particular point will frequently be left to consult specialist sources, making the work, at the level of navigating areas of the law, more useful to students and new practitioners.

Nevertheless, at the level of conceptualisation of the interaction between the common law of negligence and legislation, the work is an important and rich resource both for what it considers in detail but, equally, for the areas of inquiry that it suggests for future exploration.