I wanted to start by dealing with the elephant in the room: it’s been said that, as a group, and as individuals, the new silks aren’t very diverse. Can I say – we resemble that remark? If we were a suburb of Brisbane, we’d be Camp Hill: modestly charming, a little bit vanilla and, amongst our number, one super industrious Greek.

I would, however, make special mention of Lincoln Crowley. He’s not only a new silk. He’s the first indigenous QC that Queensland has ever produced. I would also say on behalf of all the new silks that we are very conscious that the law is at its strongest and most credible when it’s informed by people from every walk of life. We intend to take up the Chief Justice’s challenge this morning and to make sure that, through our work with community organisations, with juniors or with clients, all the different voices are heard.

It seems very strange to be talking about what we would, or could, do as senior counsel when, only a few weeks ago, we were not at all sure that we would make it. The law is so binary in lots of ways, win/lose, get paid/ don’t get paid, but never more so than when you’re opening that letter from the President of the Bar, Rebecca Treston. You don’t know if it’s going to be a snake or a ladder, but you know it’s going to be a very long one. You steel yourself for rejection and then, at the very last moment, you deploy your emotional air bags like some 15-year-old kid, telling yourself, “I know I’m not going to get it and that’s absolutely fine by me”.

Which leads me to the theme of my talk. I have approached the new intake about a topic that we might address. We agreed that what we’d really like to do is to acknowledge a huge debt to the older members of the Bar, for the assistance they have given us to date in our careers – teaching us court craft, involving us in strategy and, most of all, showing us what a strong work ethic looks like. As it happens, I had asked the staff at the Bar Association where to pitch this talk. They told me that it would be a good idea to be deferential without being sycophantic, and I thought this theme might be right in the sweet spot…

I approached the new silks for some specific examples of assistance received, but they weren’t very helpful. No one wanted to bell the cat. Andreatidis told me about a time after a big trial where he flew back to Brisbane with his leader, Roger Traves, and they walked over to the airport car park together. Nick reckons he lost his car and then he lost his silk. So he ended up spending an hour driving around the enormous car park with his head out the window of his Mini Cooper, yelling out “Travesy, Travesy!”. I don’t want to make light of how harrowing that must have been for both Nick and Roger, but it didn’t seem especially instructive for the rest of us …

Lincoln told me a story about when he was a reader in Sydney, and he asked a silk what he needed to do to be the best barrister ever. The silk told him, “Mate, it’s all about return sales. It’s like you’re running a shop selling lemon slices. And there’s a whole row of shops all selling lemon slices. You just need to make sure you’re selling the best lemon slices”. That advice seemed kind of Sydney-centric, and a little unhelpful for your Queensland audience. So, I’ve decided I’d best draw on my own experiences with senior counsel.

First, I want to give an example of how silks can put you at ease. I had only been admitted a few years, when I was briefed in a murder trial. It was making me seriously anxious. I was thinking that I hadn’t yet acquired the skills for that level of contest, and I was right. But this old criminal barrister took me aside at the Criterion Tavern. He said, Damo, you know what a murder trial is? It’s an assault trial with one less witness. That was, strangely, rather comforting.

Second, silks can help you avoid hubris. Years later, I was a junior to a fashionable commercial silk. And we were on Day 2 of the trial (so my leader was just starting to grasp all the facts), when he said to me, I’d like you to cross-examine the next witness. I was really chuffed, thinking that he must have spotted something special in my intellect. No. He said to me, “I really want to signal to the judge how desperately unimportant this next witness is, and letting you cross-examine is just the ticket”. He later told me Bill Pincus had said exactly the same thing to him, so I should be chuffed.

Third, silks can help you see the positives. I was working in chambers late on a Saturday night. I think I was trying to understand the rule in Barnes v Addy. I wouldn’t want his Honour Justice Jackson over there to think I wasn’t enjoying myself. I was. But I couldn’t help wondering if my wife and my friends over at the Lychee Lounge in West End weren’t better placed for fun. Anyway, at about 11pm, I make my way to the carpark. And there’s a silk there, and he’s had a big night out with his son at the casino. Which makes me even crankier, thinking I must be the biggest sad sack in Brisbane when even old silks are having a better time. But I talk to him and I grumble that I’ve been working. He says to me, how lucky are you? How’s that, I ask? He says, “Your practice must be really busy that you have to work on a Saturday night!” I walked away with my head held high.

Fourth, silks can keep you grounded. I was working as Counsel Assisting to Geoff Davies on the Patel Inquiry which was set in Bundaberg. The report was coming together rather well, and I bounded into Geoff’s office to tell him, excitedly, about an idea I had for the cover. I said, let’s have an image of a ute that’s taking a winding road that goes through a sugar cane paddock. It communicates FNQ, Focus, Energy and Optimism. Geoff just pointed at the door without looking up, and said: “We will never speak of this again”. He went with a plain purple cover…

The scariest advice I have received from a silk came only two weeks ago. It was from a Rockstar barrister in Sydney who sent me an email with congratulations which continued:

It’s hard to interpret that email as meaning anything except:

(a) Your personality needs major renovations; and

(b) It can’t wait until February.

I tell myself that you probably all received similar notes when you took silk, but you don’t need to tell me straight away.

I would like to say something on a serious note. Its fashionable nowadays for people to say about lawyers that they don’t produce anything, they don’t do anything useful. I don’t agree. When you listen to public debate today, there is such a clumsiness, a violence, a move to outrage and a disconnect in communication. But what our industry, our profession, teaches us is to discuss issues with civility, to present our thoughts logically, to respect opposing views, to argue with clarity and to bring evidence to bear in order to persuade others to a particular position. Those skills are sorely needed in our community.

I was educated at a Catholic boys’ school in Coorparoo and, if you made bad choices, you had to write out a very long essay by Cardinal Henry Newman called the Definition of a Gentlemen. I keep it close nowadays to remind me how to behave when I’m faced with a particularly obnoxious opponent. I actually posted it to a young woman recently who was being treated very poorly by her partner, just to let her know what she was entitled to expect.

There was one part of the essay which resonates with the point I would make. The writing didn’t need to be gendered but it was, and it described a Gentleman in part as follows:

“… He has his eyes on all his company; he is tender towards the bashful, gentle towards the distant, and merciful towards the absurd; he is seldom prominent in conversation, and never wearisome…

If he engages in controversy of any kind, his disciplined intellect preserves him from the blundering discourtesy of better, perhaps, but less educated minds, who, like blunt weapons, tear and hack instead of cutting clean, who mistake the point in argument, waste their strength on trifles, misconceive their adversary, and leave the question more involved than they find it.”

The Chief Justice spoke glowingly this morning about the privilege of being an advocate and the responsibilities of being a leader. As the newest silks, we approach this appointment, this elevation, with a growing sense of certainty about what is of value, with an excitement about the intellectual opportunities the position offers, and with a sense of wonder and humility about our good fortune in joining this tribe. 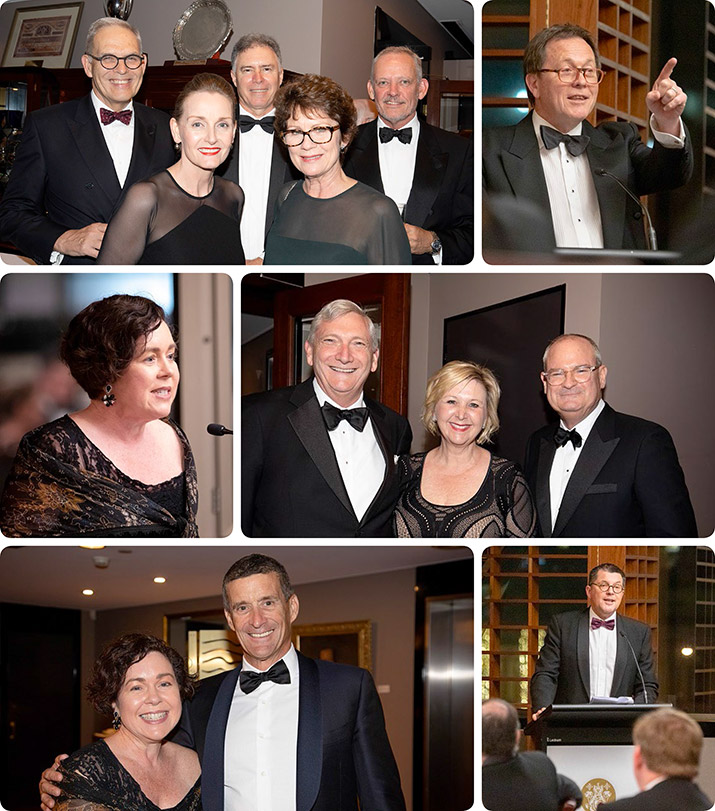