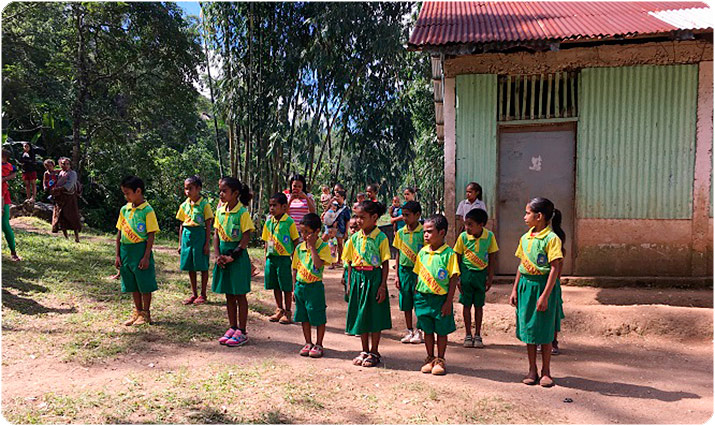 Between 16 July 2018 and 21 July 2018 a group of 12 keen adventurers (and their East Timorese companions) hiked some of the mountainous regions of the eastern parts of East Timor. This tour, organised by Andrew Maher (from the charity “With One Seed”), was led by Justice Colin Forrest of the Family Court of Australia and included four members of the Bar Association of Queensland.

East Timor is one of our closest neighbours to the north, located a short distance to the north-west of Darwin, just to the east/south-east of Indonesia. East Timor was a Portuguese colony from the 16th Century until 1975, when it gained its independence. It is properly identified by its Portuguese name “Timor-Leste”. The country has two official languages — Portuguese and Tetum (a variation of a native language, heavily influenced by Portuguese) — although there are many local languages spoken throughout the country.

The purpose of the trip to Timor-Leste was four-fold: firstly, to learn more about East Timor, a fledgling country, which finally restored its independence on 20 May 2002 (after 3 years of UN administration that followed 23 years of Indonesian occupation); second, to raise funds and awareness for “With One Seed”, an organisation dedicated to improving both the wellbeing of the East Timorese people and the environment of Timor-Leste; third, to contribute to the East Timorese economy and to strengthen relations between the peoples of Australia and Timor-Leste; and, fourth, to enjoy a week of hard bushwalking, in good company, often in steep, wet and/or difficult conditions, visiting villages and local schools, and living, eating and sleeping in the simple homes of East Timorese families.

The group enjoyed a challenging and eye-opening week in part of the Bacau District of Timor Leste, trekking over much of the ground covered by the resistance fighters of East Timor during the long period of Indonesian occupation from 1976 and 1999. The trek included the mid-week scaling of the second highest mountain in East Timor, Matebian Mane (with an elevation of just over 2,300m).

The trip raised funds for “With One Seed”, a charity which, amongst other things, contributes to the reforestation of East Timor (to reduce climate change and local environmental degradation) through the education of the local community (including school students) in sustainable farming practices and by providing incentives for East Timorese farmers to plant, and then maintain, new trees in deforested or degraded areas. The charity currently operates around the Baguia region visited by the group. The charity (operating alongside the charities “With One Bean” and “With One Planet”) also promotes sustainably grown East Timorese coffee and organises hiking expeditions in Timor-Leste, such as that undertaken by this group in July 2018. It is hoped to expand the reforestation operations of “With One Seed” to other parts of Timor Leste in the near future.

Any BAQ members wishing to contribute to this charity, or keen to try some East Timorese coffee, or simply wishing to arrange an adventure tour in East Timor, are referred to the website of “With One Seed” at withoneseed.org.au.