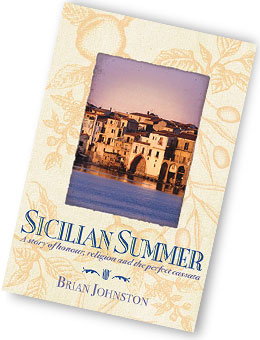 A story of honour, religion and the perfect cassata

Just over 5 years ago, in the dying days of 2011, D and I, accompanied by various family members undertook our first overseas trip. Our son, S, was marrying B, a native of Ciudad de Mexico. The wedding was to be in the old Spanish colonial city of Queretaro. We broke our practice of not leaving our native shores for this good reason and, as well as attending the wedding, spent five weeks visiting different parts of Mexico.

The experience of not knowing anything about the country I was visiting changed my reading habits. When I came back, I felt strong a strong desire to learn about Mexico’s history and literature and, bit by bit, I came to learn a little about these things.

Nearly five years later, a confluence of events overcame another of our practices and D and I set out for five weeks in and around London. A little over a week of that time was spent exploring Sicily , a place that has important heritage significance for three of our grandchildren and, hence, for us.

Thus, I feel a similar obligation to direct some of my reading time to an attempt to gain some understanding of Sicily’s complexity.

The guidance of friends led me to classical texts such as Books 6 and 7 of Thucydides’ History of the Peloponnesian War , enlightening me to the fact that a large part of that ongoing conflict between Athens and Sparta took place on the island of Sicily which was, at that time, a significant part of Magna Graecia .

The same friends led me to Steven Runciman ’s famous 1957 history of a 13th century war: The Sicilian Vespers and to Peter Robb ’s 1996 classic, Midnight in Sicily . I had made the necessary trips to Folio Books (to order and to collect the books) and my 2016/2017 holiday reading plans appeared to be settled.

Then, in a small gap in that period of housecleaning, weed removal, present wrapping and cooking that fill the days before Christmas Day, D and I stopped for breakfast at Simply Duo in Nundah. On the way back to the car, I did what I never do, namely, browse at the second hand books at the Lifeline store next to the cafÃ©. Amongst the abandoned best seller thrillers, I saw Sicilian Summer, yet another book on Sicily. How could I go past it? I felt guilty only paying $2. And to assuage my guilt, Sicilian Summer was the first book I read once the bustling social interaction of Christmas Day was over.

Mr. Johnston was born in Nigeria of Irish parents. He is now a very much established travel writer having published several books and regularly contributing travel stories to mainstream media and publishing two travel blogs. He broke into travel writing by abandoning his day job as an editor and copy writer for international environmental NGOs in Geneva, Switzerland, and heading out to Chengdu in Sichuan province in the People’s Republic of China where he taught English as a foreign language at University Sichuan. Three years in Sichuan Province produced a 1996 memoir called Boxing with Shadows. Mr. Johnston’s career as a travel writer was up and running. He has been based in Sydney for at least the past decade.

Sicilian Summer hit the presses in 2005. Mr. Johnstone’s forty year old female friend, Tina Calascione, is going back to her home village to preside at the confirmation of her godchild, Claudia, whom she hardly knows. Both friends seem able to negotiate a degree of flexibility with their employers. Sicilian Summer does not provide absolute precision on dates but the stay in Sicily allows plenty of time to explore the island as well of plenty of idle days to enjoy cooking, eating and sightseeing in the home village of Montalto. From balmy picnic days at the beginning of the stay to blazing heat; the discomfort of the hot Sirocco wind; to the tomato bottling days of late summer/early autumn, Sicilian Summer seems to traverse at least the full three months of a calendar summer.

We do not know for sure the location of Tina’s home village. Montalto is a made-up name to protect the citizens of the village about whom Mr. Johnston records many frank observations and about whom he records many equally frank comments on their personality, life and family relationships . Hints from the text suggest, however, that the village is located in eastern Sicily, probably, a little east of Messina, and facing the northern shore of the island from a slightly elevated position.

Tina’s family are returnees, a status met frequently in Sicilian villages. Although born in Montalto, she spent a number of her formative years in New York where her father ran a pizza restaurant and her mother a number of successful driving schools. While was been in other places, including her present abode of Sydney, her parents heard the sound of their own homesickness and returned to Montalto. She is not close to her parents and her sister, her only sibling, is also estranged. Coming home to do her duty as godparent is a rare and unlikely event. Spending time in the same house as her parents is an unfamiliar pastime. And playing a role in the Catholic ritual of confirmation is something to which Tina is only half reconciled.

Mr. Johnston uses the dynamics of the Calascione family as a framework for Sicilian Summer. The family dynamics are themselves portrayed within the broader social dynamics of village life and the impacts of the friendships and obligations that affect everyone. Sicilian Summer continually returns to the progress of the confirmation saga. Claudia is sulky. Tina’s mother is anxious. The local priest, Padre Perrino, is a real martinet and seems intent on frustrating the progress of the event. And Tina’s father’s frustration and anger at the latest events borders on violence. Progress is glacial which allows Mr. Johnstone and Tina to escape to all regions of Sicily to serve the greater purposes of Sicilian Summer.

Sicilian Summer is purportedly a cooking travel book. This is seen in the witty reference in the sub-title to the perfect cassata. As Mr. Johnston and his companion travel to different towns and cities, they enjoy varieties of food which constitute different regional specialties. The sightseeing in which they engage tends to reflect the deeds and influences of one or other civilisation or empire that has ruled all or part of Sicily during its long history of invasions and colonisation. Remarkably, many of these influences are reflected in the dishes that are being enjoyed. Mr. Johnston has cleverly organised his travel so that he can describe the sites that they are visiting and chronicle important parts of Sicily’s history while, at the same time, chronicling the history of food and cooking, not only in Sicily, but through Sicily’s contribution, the history of western cuisine and foodstuffs. His thesis is summed up as: “Sicily is an island of fabulous foods, and you can read its dishes the way a gypsy reads tea leaves and discover its troubled past of conquerors and curious civilisations”.

And, so, having walked, at apparent great danger to their lives at night on the upper slopes of the Aeolian island volcano, Stromboli, the adventurers spend time with Tanino, some kind of cousin to Tina, at his home on the neighbouring island of Vulcano. After having discussed the shortcomings of Plato’s lack of appreciation for good food, Tanino and Brian wander down to the rocks and eat fresh sea urchins with bread dipped in olive oil poured into a convenient rock crevice. This allows Mr. Johnston to discuss the early occupants of northern Sicily, the Lipari, via a discussion in the writings of fourth century BC Greek Sicilian, Archestratus , of the excellent quality of shrimp and lobster obtainable in the Aeolian Islands.

Another trip is to the capital, Palermo, located away in the north-western corner of Sicily. Mr. Johnston discusses, as part of a theme to be oft-repeated in his observations of towns and cities right across Sicily, the ramshackle, decaying and neglected face of Palermo. Palermo was the capital of the Arab invaders of the ninth century but also of the Norman invaders of the eleventh century. A visit to the Palatine Chapel, the private chapel of the Norman kings of Sicily and to the cathedral built by William II (the Good) at Monreale, in the hills outside Palermo, allows a discussion of the extent to which the Normans managed to retain the best of Arab culture and influence and skilled personnel under their rule and to use the talents of some of those Arab craftsmen in their architectural successes. This leads to two delicious meals of pasta in two different locations in Palermo which, in turn, segue to a debunking of the theory that Marco Polo brought the idea of pasta back from China when he finally returned from his great journey.

Rather, it seems, pasta emerged in Sicily during Arab rule and thrived as part of the continuing Arab influences that the Norman kings managed to preserve. The Arabs also brought sugar cane and oranges and lemons to Sicily and thence to the west along with many other foods we now regard as staples.

Thus, Sicilian Summer proceeds. Visit, sights, food, history and influences are woven together. Agrigento, Enna, Noto and Syracuse are a few of the localities visited. Along with the Arabs and the Normans, the Greeks, the French, the Spanish, the Byzantines and the convents and priories of Christianity are given a place in the history of Sicily and the history of food. Not everything visits neatly into the itinerary. Late in the book, when townships in the south-east are the focus of discussion and sightseeing, Sicilian Summer discusses Sicily’s great contribution to the history of ice-cream. We then find out that, back in the early Sirocco days, in Palermo, Tina had been insisting on at least a daily gelato to ameliorate the stifling heat that that breeze brings to everyone in its path. No matter, we can hardly expect life to reflect with perfect neatness the careful structure of a travel book.

And, all the way, the complications affecting the planned confirmation reveal the complexities of modern Sicilian culture, society and personality. We find that even sophisticated returnees are tied to expectations of daily intervention by Saints and Virgins and members of the Holy Trinity. The consolation of religion seems to be often necessary because, in Sicily as elsewhere, life has a will of its own and displays a pattern of failing to live up to the hopes and expectations of those who are doomed to live it.

But life also has its own consolations outside the superstitions of religion. And, in Sicily, at least, according to Sicilian Summer, that often involves food and conviviality.

For me, Sicilian Summer was an unheralded addition to my summer reading. It provided, with liveliness and engagement, a level of understanding of the complexities of Sicilian life and history that I had not achieved in my own short stay.