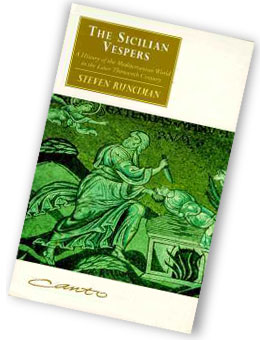 In 2016, for various reasons, D and I found ourselves, with four other people, spending eight days in a house in Calatabiano in eastern Sicily. For various other reasons, I have since felt an obligation to gain some knowledge of the history and literature of that much invaded island.

One of my more knowledgeable friends on that part of the world referred me to this famous 1958 text by this even more famous historian. Steven Runciman was born in 1903. His parents were Liberal MPs and the first married couple to sit in the British Parliament. Runciman’s mastery of texts published in many different languages was foreshadowed by his ability to read both Latin and ancient Greek when he was five years old. He is most famous for his A History of the Crusades published in three volumes across 1951-1954. Runciman is said to be single-handedly responsible for the modern public understanding of the Crusades as something other than a glorious, holy and selfless set of campaigns to free the Holy Lands from the tyranny of the godless people who occupied it. He was a contemporary and school mate of George Orwell at Eton.

Importantly, A History of the Crusades is said to have been so influential, not so much for Runciman’s extraordinary learning in the subject matter, but for the beautiful and stylish manner in which he tells the story which emerges from that learning. That ability to write beautifully is present, also, in The Vespers.

The Sicilian Vespers is an event, not a prayer. On Easter Monday, 30 March 1282, an incident occurred outside the Church of the Holy Spirit on the outskirts of Palermo (now, the capital of Sicily) where worshippers were engaged in Easter celebrations and waiting for the sunset prayers known as the Vespers, to commence. Sicily, at the time, suffered under the oppressive government of a largely absentee King Charles, a brother of the French King, Louis, and a scion of the House of Anjou. Some French soldiers had mingled with the celebrating local worshippers.

The oral tradition remembers the name of the French sergeant, Drouet, who sought to impose himself on a local married woman before her angry husband drew a knife and killed him. Sergeant Drouet’s colleagues sought to intervene and were surrounded by a group of armed Sicilian men who imposed the same fate upon them as had been received by their friend, the sergeant.

The incident triggered a planned uprising and, as the bells for Vespers rang, messengers ran through the city calling on the men of the city to rise up. Every French person encountered was attacked and, over ensuing weeks, over 3,000 French people, across the island, died. The uprising spread and Sicily was liberated, at least for the moment.

That is the short story but Runciman’s narrative places the Sicilian rebellion in the context of medieval European history. Sicily had become a Norman kingdom from about 1091. Although this was achieved by conquest, the Norman kings ran a successful, multi-cultural society and, for a century, Sicily experienced a golden age. On the death of William the Good in 1189, although a period of turbulence ensued, Sicily, through marriage and the lack of a direct male heir, passed to the German house of Hohenstaufen which had produced a number of Holy Roman emperors. The real story of the Vespers starts with the death, on 13 February 1250, of Frederick II, son of Sicilian born native, Queen Constance, son of Henry of the house of Hohenstaufen, King of Sicily but, also, Emperor, King of Germany and of Jerusalem, and hated enemy of the papacy.

It was an illegitimate son of Frederick II, Manfred, who came out on top of the pile of uncertainty that was left by the Emperor’s death. He was crowned King of Sicily (which included most of southern Italy as well as the island) on 10 August 1258. The antipathy of the popes to the Hohenstaufen line had not diminished. It was a French churchman who, as Pope Urban IV, had offered to Charles of Anjou, brother of the King of France, the right to become the King of Sicily. In late June, 1263, Charles accepted the offer. He assembled an army; marched them to Italy; and, on Friday, 26 February 1266, at Benevento, destroyed the army of Manfred who died in the battle.

It was Charles’ administration, run by mainly Provence and mainland Italian officials, against whom the Vespers rebellion took place. The rebellion succeeded in freeing the whole island. With help from the King and Queen of Aragon (the Queen, another Constance, was a daughter of Manfred), Charles’ attempts to regain Sicily were successfully resisted. The loss of Sicily led to trouble, elsewhere, for Charles and he lost battles all over his dominions, both at sea and on land. His health deteriorated and, on 7 January 1285, nearly three years after the Vespers uprising, he died at Foggia.

The Sicilian experience, post the uprising, took many twists and turns and the major players, heads of state and popes, made deals which did not have the interests of the Sicilian people at heart. The islanders’ fierce sense of independence led them to refuse to be governed by anyone other persons who were connected to the island and who were approved by them. First, under the said Queen Constance, born in Sicily and married to the King of Aragon, and then under her son, James, and her other son, Frederick, they managed to retain their independence.

This period of independence lasted for over a hundred years until 1409 when, by succession, Sicily became joined to Aragon and, subsequently, to Spain.

The Sicilian Vespers is fascinating just considered as a Sicilian story. The fundamental point that Runciman makes, however, is that, when the Papacy decided to intervene by inviting a French noble to rule much of Italy, it undermined the era of Christian universalism and its own ability to provide leadership to Christians. At the same time, it helped to usher in the fragmenting influence of nationalism. The success of the Vespers uprising helped show the bankruptcy of that papal strategy.

However one wants to envisage the Sicilian Vespers events, Runciman’s narrative and analysis comes embedded within the beautiful style of writing for which he is famous. The Sicilian Vespers, despite the detailed nature of the events which are traversed, is a pleasure to read.

Albeit, in retrospect, Palermo, Cefalu, Messina, Catania and, even, Calatabiano, itself, take on new meaning for me. Albeit, in small steps, I am coming to some understanding of the rich past that Sicily carries with it and offers to any visitor.