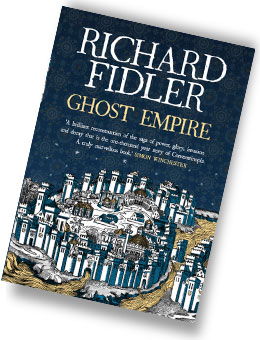 I have read other books about Istanbul. Orhan Pamuk’s Istanbul — Memories and the City is a wonderful piece of autobiography cast against the streets and history of his native city which he has hardly ever left. Irfan Orga’s Portrait of a Turkish Family is, as it name suggests, a family history as well as a personal memoir. And, since the early part of Orga’s life is was lived behind the Blue Mosque, Portrait is also a narrative in which Istanbul plays an important role.

Orga, born in 1908, and Pamuk, born in 1952, are natives of Istanbul. As twentieth century Turks, they see the city through the prism of the Ottoman Empire, fading and faded, failing and failed.

The Ottomans captured Constantinople on 29 May 1453. Defeat in World War I led to partition of the Empire and occupation of Constantinople which, in turn, led to the Turkish War of Independence; the end of the Sultanate; and the establishment in 1922 of a secular Turkish State under dual war hero, Kemal Ataturk.

Particularly for Orhan Pamuk, his city is defined by what remains of an empire that spanned 469 years. The presence of decay and the sadness of past glories are ever present. They define not only Istanbul but Istanbullus, as well.

Ghost Empire , in one respect, is a story that ends when that of Pamuk and Orga begins. The fall of Constantinople to 21 year old Mehmed the Conqueror in 1453 marked the end of an empire that had lasted much longer than 469 years, the Byzantine or Eastern Roman Empire. For those of us born in the latter half of the twentieth century, Byzantium has tended to conjure up feelings of legendary grandeur that, more likely than not, never existed. While, without knowing the detail, we readily concede that Greece and Rome underpin our modern understandings and values, Constantinople feels irrelevant even if a city that bore that name did once exist.

Almost all his life, Richard Fidler has been fascinated by the heritage of Constantinople. The thesis of Ghost Empire is that the Byzantines play a much more influential role in what we do and think than we acknowledge or know. Not as something in addition to our Greek and Roman heritage, but as an essential part of it, the Ghost Empire trundles on exerting its influence in modern, especially, western consciousness.

Fidler, as part of the Doug Anthony Allstars , was an explosive comic and musical star performer. In more recent times, he is a much admired interviewer on ABC radio. Despite the learning on display in Ghost Empire, he is not known as a professional historian. It may seem a bit cheeky for a person of his background, to seek to tell, for a popular audience, a long, complicated and much neglected history.

Perhaps, for that reason, Fidler wraps a serious history of Constantinople in the package of a personal, a family and a travel memoir. As the blurb says, this is the story that Fidler wanted his then 14 year old son, Joe, to know.

The author and Joe journey to Istanbul as a father and son team in 2014. They leave mother and daughter at home to be compensated by their own journey at some suitable later time.

Fidler’s fascination with and knowledge of Byzantine history goes back two decades to his mid-twenties when he bought the first volume of a three volume history of Byzantium by John Julius Norwich. He was struck then by the fact that the story of the eastern empire does not make it into the history we are taught or the stories we are told or even the lines of inquiry we are encouraged to pursue in school and university.

And so Ghost Empire is a culmination of those decades since. Fidler has rectified the gap in our education for all of us.

A history of the capital city of an empire that spanned over 1,100 years is going to be a traditional history in the sense of being about the emperors and the other important people. Ghost Empire is no exception in that regard. Fidler does manage, however, to give the reader some idea as to how the highs and lows, success and riches on the one hand and losses, sackings and the plague, on the other, impacted on the ordinary people of the city.

There are many emperors in 1,100 years and not all of them receive the same amount of focus or words in the text. Constantine, for whom the city is named, receives plenty of both. Ghost Empire charts his bloody battle to the top of the pile of contenders to become emperor of what was an undivided empire by 324. It was he who planned, in the very same year, and established a New Rome in the location of an existing city, Byzantium. Though he did call it New Rome, it was not long before the name honoured the founder. One of the few things we learned in school about the east was that Constantine adopted Christianity and made it the official religion of the empire thus stealing from Christians of the day and since the joys and privileges of being outsiders speaking truth to power for the more dubious pleasures of being part of the establishment.

Under Constantine, Christianity became a state religion. He managed the abstruse conflicts over religious doctrine including the precise status, nature and relationships of God the Son, as part of the Holy Trinity. It was Constantine who called the Council at Nicaea in northern Asia Minor just over the narrow straits from Constantinople. Thus, it was he who gave Catholics their statement of belief, the Nicaean Creed which Roman Catholics still get to recite as part of their mass.

Justinian, who succeeded his Dad, Justin, as emperor in 527, is another emperor of the east who, perhaps, without knowing it, the reader may have heard of. He was the one of the Code. He was also the one who married Theodora, the working woman, who became a great and influential empress. And for anyone who has visited, or has thought of visiting Istanbul, Justinian was also responsible for the construction of the Church of Hagia Sophia.

Ghost Empire relates the stories of all these events in Justinian’s reign and more. The story of the codification is also the story of the first Law Reform Commission. The Commission of ten was chaired by John of Cappadocia. The workhorse, however, was a palace advisor, Tribonian. There had been compilations of Roman laws, before, but the laws were a mess and full of ambiguities and inconsistencies. Justinian gave the Commission the task of fixing it all up. They did the job in just over a year and the new Code was promulgated into law.

Tribonian went on to produce further editions of the Code and other related projects. The Code went on to be the basis of the various civil Codes that state much of the law in most countries in western and eastern Europe.

Ghost Empire also tells the story of the Fourth Crusade , the story of brave adventurers, mainly nobles from France, who fell under the guidance of, and into indebtedness to, the Republic of Venice and its blind and aged but remorseless Doge, Enrico Dandolo .

The Crusaders never got to Palestine. Instead, in 1204, they managed to conquer and sack Constantinople and to acquire a legendary pile of booty some of which still adorn the churches and palaces and museums of western Europe. An eye witness and chronicler of that Crusade describes the pile as enough to fill three churches: none could tell you the of it: gold and silver …

This beginning of the end for Constantinople, though it took another 250 years, was also the confirmation of the legend of the east in the west. It is that legend, and the truth that lies below it, that is Fidler’s inspiration and the heart of Ghost Empire.

Ghost Empire also conveys, through other testimony of other eye witnesses, the beauty and the richness of Constantinople, especially, in those days when its glory was at its apex. But it is the richness of the narrative that is most compelling. There are stories of entertainments and of factions among the influential on whom the emperors depended. There are stories of place intrigue and betrayal and bitter battles over the right to succession. The legends and the superstitions that came to drive events, at least in retrospect, also find their place in the ballad.

Though Pamuk was telling a story of a different city in a different era that, almost coincidentally, shares the same geographical coordinates, both authors pursue the same objective that is reflected in Pamuk’s title, “memories and the city”. At the end of the day, despite its necessary focus on the people who wielded power, Ghost Empire is the story of a city.

Fidler writes beautifully. Ghost Empire is history as story telling. The history of Byzantium struck him on first reading as a wondrous collection of stories that were so fabulous that he could not understand why they had not previously been brought to his attention. Some of the stories of Byzantium are mere legends. But much of what is documented and undoubtedly true is as strange and difficult to credit as those tales which are indeed legends.

Fidler says that he wanted to share that story of Constantinople with his son. That is also true. But the desire to share great stories is not sated by a single re-telling. Fidler, equally, wanted to share his story with thousands of readers. And each of us is richer for that.