Book Review: As in memory long 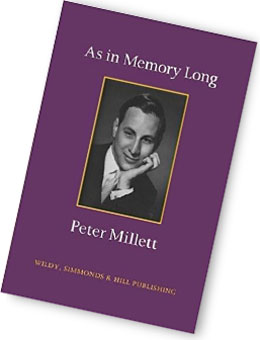 Book Review: As in memory long

Peter Millett’s wry memoir takes us from his days at Harrow, through his early steps at the Bar, on through his rise through the legal profession, and then the judiciary.

He has had a long and distinguished career. He is still sitting. As I wrote this note, 3 decisions came through from the Hong Kong Court of Final Appeal, in which Millett sat in January 2017. He is 84. He has a world of experience to share, in knowingly written vignettes.

I have said “wry”. But this is also an intimate account of life, both professional and personal. He is unafraid of his small failings, and gives them a humorous turn, even if at his expense. The story, of how he finally settled down with his future wife, has unexpected turns, some of which he readily concedes were not his finest hour. But it is hilariously told.

There is neither money nor title in his background. His paternal grandfather, a Polish Jew, emigrated to England in 1869. The family was poor. Millett brings a particular perspective, of how a middle class, Jewish lad fitted in to English life.

His account of Harrow, and of his travels before commencing at Cambridge, are delightful. Stories from his early practice at the Chancery Bar remind us of a different era. They are valuable war stories. On taking silk, he found a new practice in Asian courts, such as Hong Kong. This required some cultural accommodations. The controversies ranged from a fortuitously cockedâup attempt at rigging the Hong Kong stock exchange, through to successful feng shui advice involving an umbrella pointing at the prosecutor. That chapter is called “The Bamboo Circuit”.

I racked my brains, but I could think of nothing. I felt humiliated: How could I be 53 years old and have no skeletons in my cupboard? Eventually I blurted out, “Well, I am a freemason.”

Apparently that did not matter.

After retiring from the House of Lords, Lord Millett returned to Hong Kong to sit occasionally on the Court of Final Appeal. He clearly enjoyed being able to return to old stamping grounds. This is a very strong court, and Queensland barristers should take notice of its decisions. Sir Anthony Mason also held appointment to that Court, of whom Millett says that he “… was still sitting in the Court of Final Appeal in 2014, when he was 89 and still possessed the finest legal brain on the Court”.

This fine, brief memoir is a delight. It is quietly instructive, though that is not the point. It is a truly pleasurable read.