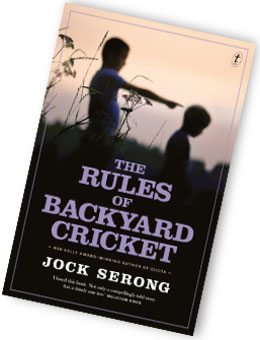 It was not a surprising thing that, for my birthday, I might receive a book called “The Rules of Backyard Cricket” from a family of granddaughters who had, along with their parents, each signed an inscription on the title page. Big Bash had been a big topic of conversation at Thursday night dinners during 2016. I had spent a fair bit of time during day time gatherings trying to get one or other child to improve some aspect of the skill set that would eventually allow them to play cricket. Indeed, although it was after my birthday and after I had received my copy of The Rules, I did achieve one of those influential occurrences where everyone plays: young and old, male and female, cousins, aunts and uncles.

I made a point of reading The Rules as my first book of the Christmas holidays. Indeed, I commenced it even before they had properly started. All those other books left over from my October birthday, and the avalanche of them that would arrive in a few days, would have to wait. Perhaps, the inscriptions suggesting that I knew a thing or two about the backyard form of the game were influential in that decision.

The Rules is not an esoteric discussion of the rules of backyard cricket. There is nothing therein about whether striking the tennis ball over the fence on the full should result in the batter receiving six runs credit while at the same time being forced to cease batting. It is not that sort of book at all.

The first chapter is about a man bound and gagged travelling in the boot of a motor vehicle between Geelong and the western suburbs of Melbourne. He has recently received a bullet wound to his knee. And he anticipates that the end of his journey will be closely followed by his death, also, by gunshot.

Cricket, indeed, backyard cricket, is introduced in the second chapter. The structure of the novel also becomes clear. The man in the boot, and narrator of The Rules, is Darren Keefe. His review of his life for the benefit of the reader commences in chapter 2. We meet him as a grade two-er, playing cricket against his older (by 19 months) brother, Wally, in their backyard in Fernley Road, Altona, in 1976.

As the novel unfolds, we return at the beginning of each chapter to Darren’s struggles, inside the boot, to obtain some freedom from his duct tape gag and the cable ties binding his hands and feet. The bulk of the narration, however, concerns the review of Darren’s life as, supported by their single mother, he and Wally graduate from the backyard to junior club, then through the various levels, to lives and careers in and around first class cricket.

A novel which commences with the main protagonist wounded and restrained in the boot of a car on a last journey to his certain death is always going to be a thriller and a whodunit.

The reader might be forgiven, however, for much of the novel’s progress to regard the book as a fictionalised but serious study of Australian sport and society in the decades either side of the turn of the twenty-first century. Darren and Wally are raised by their single mother who works long shifts as a bar worker for this purpose. That she is dedicated to enabling their lives as emerging cricketers means that the hours are longer to meet the expenses of club fees and equipment but punctuated by short visits to cricket grounds to watch the two boys play.

From the beginning, the games of backyard cricket are marked by fanatical rivalry that breaks out into childhood fights on a regular basis. The rivalry rising to antipathy continues through their lives into adulthood and beyond. The rivalry, forged in childhood battles, appears, most of the time, to be just the other side of family closeness and love.

Unlike most other backyard cricket alumni, Darren and Wally are brilliantly talented and their honed skills lead to stellar careers. Darren is the more brilliant of the two. His career is held back, somewhat, however, by his propensity for late nights and illicit substances; his lack of love for officialdom; and his lack of discretion in his choice of friends. The chief exhibit in respect of the last of these qualities is Darren’s housemate, friend and protector, Craigo, who had saved both Darren and Wally from a beating when the sledging in an early junior rep game had matured into an ambush by opposition players on the way out of the stadium. Craigo, however, while he is devoted and clings to Darren, has other parts to his life that Darren would rather ignore and deny than guess at.

Wally, on the other hand, scales the greatest heights of the game because his performances are backed by his knowledge of, and ability to comply with, the rules, written and unwritten, that accompany any human activity. The always restrained and composed appearance that Wally presents to the world shows none of the uncontrolled violence that had punctuated his part in the childhood backyard battles.

The close knit relationships of a single parent home are supplemented with the passage of time by the addition of Wally’s wife, Louise, their daughter, Hannah, and Darren’s partner, Honey, a publicity officer of a radio station in whose studio Darren had been making a guest appearance. The family dynamics are impacted upon by the demands of professional sporting lives. They help to ameliorate the worst of those impacts on individuals but the family, itself, suffers. This is a battle fit for titans.

Darren’s weakness for bad friends and the unsavoury aspects of life allows The Rules to pack in examples of all the worst things that have happened in modern Australian professional sport. The real life examples do not come just from cricket. Rugby League and Australian Rules Football are two other generous contributors. Contact with professional criminals; reckless drug taking; womanising; and involvement with gambling interests including the spot fixing of sporting events all find their way into Darren’s life and play a role in his course towards his unhappy situation in the boot of a travelling vehicle. The device of the bad boy sportsperson as narrator allows The Rules to provide an explanation as to how apparently admirable human beings can find themselves making repeated selfish and stupid decisions that harm themselves and those who surround them.

One of Jock Serong’s loveliest achievements in the pages of The Rules is his excoriation of the involvement of the communications industry in enabling famous people who have breached the norms of society to redeem themselves through a shallow public explanation and apology in profitable prime time, thereby, allowing them to resume their selfish and profitable lives. Darren is, himself, revolted by the process through which he is redeemed and the actors who facilitate it. Nonetheless, like many before him, he consents to go through it and is soon, again, resuming his life as an authoritative figure within media’s coverage of sporting events.

Gradually, as the progress of the biographical narrative inches closer to the dramatic crime scene opening of the novel, The Rules reinstates itself as a mystery thriller in the reader’s mind. The reader turns over the likely and less likely culprits for the likeable Darren’s present difficulties and attempts to resift the given information for clues.

Jock Serong, like many successful writers, has previously worked as a lawyer. He is the editor of a magazine publishing stories about the oceans called the Great Ocean Quarterly . He has contributed articles on sport to different journals including this excellent piece on world professional surfing champion, Tyler Wright.

The Rules of Backyard Cricket is an exciting read and works both as a mystery crime novel and as a welcome critique of those aspects of professional sport that gain headlines when they surface but which we all largely ignore. We gain so much satisfaction from watching and following sport. Like Darren and Wally, sport goes back to roots in our childhood. For these reasons, perhaps, it easier to assume that nothing is really wrong with its modern professional emanation and the industries that draw upon it.