O n 3 August 2018 the Federal Court in Brisbane hosted the 4th Aboriginal and Torres Strait Islander Students’ Moot Competition, in which Indigenous students from 4 Queensland universities argued an appeal before judges from the High Court, the Court of Appeal, the Federal Court and the Supreme Court.

The winner of the final moot, in which the judges were Chief Justice Allsop (presiding), Justice Edelman and President Sofronoff, were the team from the University of Queensland, Martin Doyle, Naomi McCarthy and Cassia Bray. The runners up were the Bond University team, Giselle Kilner-Parmenter and Talhia Cohen-Duke.

The Aboriginal and Torres Strait Islander Students’ Moot Competition has been undertaken annually since 2015. The partners who conduct the competition are the members of North Quarter Lane Chambers, Allens, Ashursts and the Indigenous Lawyers Association of Queensland (ILAQ). It is open to Indigenous law students from participating Queensland universities. The purpose of the competition is to give Indigenous students an opportunity, outside their University courses, to participate in a mooting competition in which they will obtain practical instruction from practising barristers and will argue cases before real judges.

In preparation for the competition, barristers from North Quarter Lane Chambers. in conjunction with ILAQ, prepare a moot problem each year. This year the rather curly problem was drawn by Anastasia Nicholas of North Quarter Lane Chambers and Avelina Tarago, President of ILAQ. The problem usually involves issues of commercial law and has a particularly Indigenous factual focus.

The barristers then hold two formal practical training sessions — the first in preparing written appellate submissions (this year led by Damien O’Brien QC) and the second in preparing for and addressing an appellate court (this year led by Thomas Bradley QC) — and offer an additional separate session by one or two of the barristers with each team shortly before the date of the moot. Allens and Ashursts provide the locations for the training sessions and practical support, as well as a welcoming function, the prizes for the winners and the perpetual trophy. ILAQ provides logistical support, assists in drawing the moot problem and undertakes most of the administrative support and liaison with the judiciary.

In past years, the moots have been held at the Supreme Court and have been judged by judges of that court and barristers from North Quarter Lane Chambers.

This year, Justice Philippides provided considerable assistance and undertook a great deal of work to help grow the profile of the competition and to provide additional “judge power”. At Justice Philippides’ suggestion and with her assistance, for the first time the moot involved judges from the High Court and the Federal Court as well as the Supreme Court, and it was held in the Federal Court in Brisbane.

The moots themselves comprised 2 initial moots late in the morning of 3 August, in which teams from 2 of the 4 participating universities competed. In one moot, teams from Bond University and Griffith University appeared before Philippides JA, Sarah Derrington J and Thomas Bradley QC. In the other, teams from the University of Queensland and Queensland University of Technology appeared before Logan, Reeves and Bowskill JJ. All teams argued their cases very well, especially for students with so little experience. The Griffith “team” had, by then, been reduced to one, but he nevertheless did his best to present his client’s case to the court.

The winners of those moots, Bond University and the University of Queensland, went on to appear in the final moot that evening, in Court 1 before a bench comprising Allsop CJ, Edelman J and Sofronoff P and an audience of about 80 people. Before the moot began, Indigenous students from the Australian Centre for Performing Arts performed an Aboriginal dance, followed by a 15 member Indigenous choir singing “My Island Home”.

For the final moot, the Bond University team had the unenviable task of arguing the case for the opposite party to their “client” in the first moot. Both teams presented their cases admirably, including having to answer questions from a bench who, typically of an appellate court, focused on the most difficult issues facing each party. It must be said, however, that the bench was very considerate toward each team.

This competition is now in its fourth year. The partners are proud to have initiated it and to continue to support and grow its reputation and strength. We believe that it will give added impetus and assistance to Indigenous law students to complete and excel in their studies and to become future leaders in their communities and in Australia.

In future years, the partners hope to expand the competition to include other universities in Queensland, and perhaps even interstate. The partners are also extremely grateful for the assistance and support that the competition receives from the judiciary. 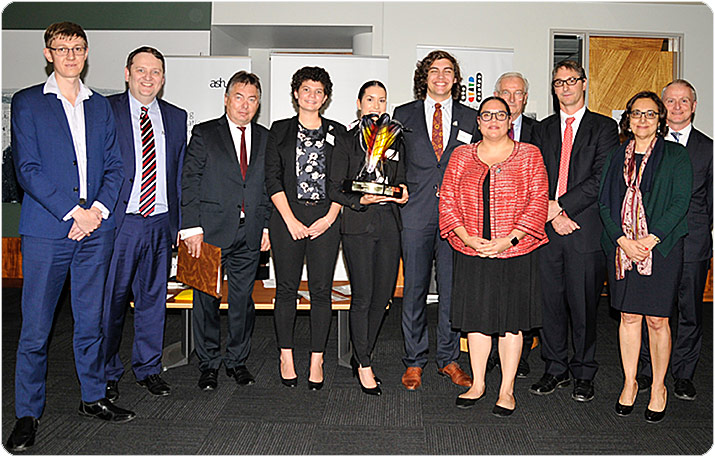 The winning UQ team, with final moot judges and representatives of the sponsors