Previous Issue
Issue 87
About Us
HOME / Response to Toast to the Profession
FEATURE ARTICLE - Issue 77: Nov 2016, Speeches and Legal Articles of Interest

Response to Toast to the Profession

Response to Toast to the Profession 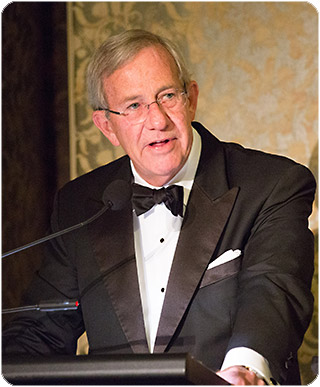 Tonight’s dinner celebrates our profession, our collegiality, our strong relationship with the Judiciary and our strong commitment in our role as officers of the court, and as His Honour has urged, to serve the community in doing so.

When I was originally admitted as a barrister, I was #124 on the roll and I think about 85 were actually in practice. There are now, about 950 practising barristers in Queensland. It’s not as easy to know each other but we can only try.

I have a vivid memory of one of my early cases in which I was to appear in the Magistrates Court for a real estate agent suing for commission. A property was sold by a private agreement between his principal vendor and the purchaser a couple of weeks after a written sole agency agreement had expired. My client, originally, had in fact introduced the purchaser to the property but the vendor had, unusually, outsmarted him. There had been no re-engagement in writing - required under the legislation to entitle him to claim commission.

A simple point of law; but, my client couldn’t understand it and, even if he did, he wouldn’t accept it.

The odds (and the law) were against him but on his insistence (as a matter of principle), I was required to work up an argument that might at least be heard and raise a question to be determined. That, I did, and a severance argument materialized.

I walked George Street to the Herschel Street Magistrates Court and found myself walking alongside Ted Lennon QC, known for his expertise in Property Law and more. He was carrying a large bag containing volumes of Law Reports with enough precedent to fill the whole of a modern trolley.

When I respectfully asked him if he was heading in the right direction, the ensuing conversation made it obvious. He was my opponent. He said to me “ Douglas, I have a preliminary point of law”. We should be back well before lunch!”

Those of you who knew Ted Lennon will know the importance attached to that statement.

Well, in response to the preliminary point of law, I raised my severance argument. The Magistrate gave it to me straight. “I’m not sure about that. Is that Murphy’s Law or just plain bush law?”

[As this was about ten years before The Castle had been screened, I was wanting for a third angle.]

I said, Your Worship (as we addressed them, then): “Your first proposition may be correct in one respect, but I may have to concede the second may not be as viable.”

My original advice to my client was vindicated, but I appreciated the fact that Ted said to me, on the way back to Chambers: “Douglas, I was worried for a moment you might have had an argument which would have meant we be there past lunch time.”

Celebrations, like ours, are held for many reasons. Some, even, for anniversaries of deaths. It was 400 years, in April, since the death of Shakespeare. He died on 23rd April 1616, 52 years to the day after his birthday. That is perhaps unusual, really….. to die on the same date as that on which you were born. So, if it happens to be your birthday today………… hopefully, you’ll not suffer the same coincidence. ….But please be careful, the day’s not over yet.

Shakespeare’s writings are full of references to lawyers and the law. The worst, of course, was in Henry VI, Part II, act IV , by Dick the Butcher following Jack Cade’s manifesto of dissolving the structures giving shape to his society:

“The first thing we do, let’s kill all the lawyers.” Shakespeare wrote more about lawyers than any other profession, though often portraying them in a negative light.

But what about Charles Dickens? Dickens appears to have hated lawyers for, probably, the same reasons your neighbor does: “every lawsuit leaves at least one side unhappy – yet the bar always wins”.

e.g.Uriah Heep, in “David Copperfield” - as a red-eyed cadaver whose “lank forefinger,” while he reads, makes “clammy tracks along the page ... like a snail.”

Mr. Vholes (in “Bleak House”), “so eager, so bloodless and gaunt,” is “always looking at the client, as if he were making a lingering meal of him with his eyes.”

How many times have we heard reference to us in cases he wrote about such as Jarndyce v. Jarndyce in “Bleak House”. ……grinding on for generations as wigged pedants spending entire careers “groping knee-deep in technicalities” and in the “Pickwick Papers” trial (one of the great comic scenes in literature) — innocence is irrelevant, the lawyers are thugs, and the judge is asleep.

Regrettably, such negative tendencies have caught on with a critical press and an unforgiving and ill-informed section of a vocal minority within our community. But we can be comforted by the views of a Rugby League player they call the $ 2.4 million (dollar) man when he said at his last press conference: “Today’s media is not about facts or truths anymore”.

As His Honour rightly applauds, our role will continue to contribute to preserving the Rule of Law.

And as for the judiciary: Nea rly 40 years ago, Lord Devlin observed: "the English judiciary is popularly treated as a national institution, like the navy, and tends to be admired to excess".

But, in an address to fellow judges about 20 years later, Sir Gerard Brennan observed:

“The differences between Lord Devlin's England of 40 years ago and the society we know and the doubtful naval analogy should deter us from taking too much comfort from that statement or, for that matter, from the statements of eminent judges in jurisdictions in which social conditions and cultural attitudes are different from our own.”

We know that criticism and difficulty in performing tasks are hardly the attractive features of any vocation and yet judges accept their appointment, their raison d'être being the maintenance of the rule of law in a free society.

We as barristers can appreciate that and, Justice Bond, can I assure you, we do.

But, please, indulge me by allowing me to confirm the validity of Murphy’s law: (and you may be forgiven for thinking that I’m Irish because it’s a slightly Irish explanation)

Earlier this year, I dropped some buttered toast on the floor and it landed… butter-side-up.

I was astonished because it’s the universal law of nature that buttered toast always falls ….butter-down.

So…… I rushed to the nearest presbytery to fetch Father Flanagan and told him that a miracle had occurred in my kitchen and exhorted him to come and see it with his own eyes.

I led him to my kitchen and asked him “What do you see on the floor?

Well, he said: “It’s pretty obvious. Someone has dropped some buttered toast on the floor and then for some strange reason they flipped it over so the butter was on top.”

I said: “No, Father Flanagan, I dropped it and it landed like that”.

“Oh my Lord” said Father Flanagan “dropped toast never falls with the butter side up. It’s a mira…Wait….it’s not for me to say it’s a miracle. I’ll have to report it.”

So, people came round, interviewed me, took photos and so on…There was a thorough investigation by the archdiocese and scientists sent from the Roman Curia with no expense spared. There was much excitement…. as everyone knew that a miracle would bring to Brisbane much needed tourism revenue as opposed to having to shut down the streets of the CBD and turning the place into New York.

Eight weeks later, with some fanfare, the Bishop announced the final ruling.

“It is certain an extraordinary event took place in Murphy’s kitchen, quite outside the natural laws of the Universe. Yet, the Holy See must be very cautious before ruling a miracle. All other explanations must be ruled out.

Unfortunately, in this case, it was declared: “No miracle. It’s possible…. Murphy might have buttered the toast on the wrong side.”

Ladies and gentlemen, true gratitude does not require to be clothed in many words, or words of wisdom, or even poorly attempted humour, so, Justice Bond, and all members of the Judiciary present, on behalf of the members of the Queensland Bar…… in a few words from Sebastian to Antonio, in Act 3, Scene 3 of Twelth Night :

“I can no other answer make, but, thanks, and thanks.”