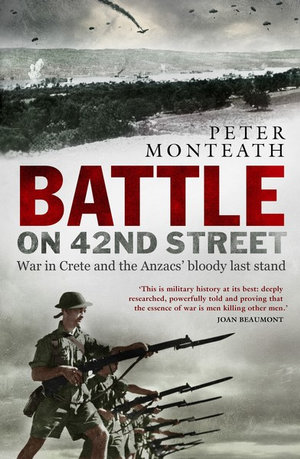 This recently published book is an historical account which presents a most accurate picture of the fight, predominantly by the Australian and New Zealand armies, to try to repel the German invasion of the island of Crete in May 1941.

Over the years, I had heard quite a bit about this battle from the point of view of people who lived in Crete, at the time. This book, however, gives a much more detailed and vivid picture.

The title comes from the name given to the location of one of the greatest battles where the Anzacs shone most brightly.

One could not say that this is background to the book, as my impression is that it is a major facet of it, but the Australians and the New Zealanders, particularly the Maori soldiers, demonstrated that, in ground skirmishes, the bayonet was every bit as successful as the German Stuka dive bombers were in the air.

The author presents a graphic picture of how the Maoris used the Haka very effectively prior to going into close battle with the German troops and how the bayonet was both psychologically and physically such a useful weapon at short range. Often their enemy turned and ran to avoid the bayonet-wielding Anzacs.

It is not difficult to imagine the fear that the Anzacs, themselves, must have felt when they were subjected to paratroopers descending on them, all the while also being attacked by the Stuka dive bombers. Most, if not all, anecdotes that involve these aircraft make mention of the terrible noise that they made as they descended at high speed to strafe the unfortunate people on the ground. What I did not know, until reading this book, was that this noise was caused by a device specifically installed in order to intimidate. I saw resemblances between the Haka and these “Jericho Sirens” as, in its own way, each was intended to cause the same result in their enemy.

I will never again look at a Haka, prior to a sporting event, without gaining even more respect for it.

The book follows the fight for Crete which, history shows us, was won by the Germans. Many Anzacs were left behind, some to become prisoners of war and others to live in the forest either to try to find their way back to friendly territory or, in many cases, to later surrender due to poor health, lack of food etc.

I read this as an e-book which proved to be a convenient way of accessing and enjoying the book.

It is extremely well written, by which I mean that the style makes for easy reading, the content is detailed without ever becoming boring and the author’s tactic of following the history of a number of the officers and other ranks, both through the battle for Crete and into later life, provides additional perspective. As well, the book is written with many references to German strategy of the time, an account of the mistakes made on both sides and, perhaps, identifying how errors on the Anzac side contributed greatly to the defeat at a time when, we can now say with hindsight, victory was in the Anzacs’ grasp until the baton was dropped.