Book Review: A Life of Crime 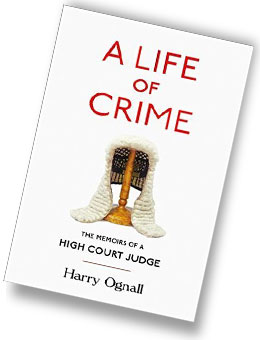 Book Review: A Life of Crime

Sir Harry was born in 1934 in Lancashire. He read law at Lincoln College, Oxford, starting in 1953. After study abroad and serving as Marshall to Pearson J, he joined chambers in Leeds, practising on the common law side.

This brief memoir (147 pp) is valuable for Sir Harry’s account of his days at the Bar, the greater part of the book. While time has moved on, and some fashions and opinions have doubtless shifted, this account of the arc – from pupil to High Court Justice in England — is topical and engaging. It is in turn serious and humorous.

In the former case, the then Attorney-General, Sir Michael Havers, had decided to lead the prosecution. Sir Michael submitted to Boreham J, at a directions hearing, that in light of the unanimous psychiatric opinion, the prosecution was minded to dispose of the case by way of pleas of guilty to manslaughter, not murder.

Boreham J indicated that he was not prepared to accept the pleas. This dealt Sir Michael out of testing the psychiatric evidence at the later trial. Thus, Sir Michael cross-examined Peter Sutcliffe and Sir Harry had the important task of crossâexamining the psychiatrists.

His account of how he planned that cross-examination, and conducted it, is an object lesson in testing expert evidence.

The trial in Zimbabwe posed other difficulties and challenges.

First, the death penalty was on the table. Secondly, in accordance with Zimbabwean procedure, the confessions of the accused had been confirmed by them before a magistrate.

The threats and beatings, and the systematic way in which prison accommodation had been repeatedly switched so as to deprive the accused of any access to legal counsel, was not before the magistrate, when the confessions were confirmed. This was critical to the defence.

Again, cross-examination of a key witness would be crucial. And so it proved. The men were acquitted by a court presided over by a judge, with two assessors.

Sir Harry’s asides through his memoir are serious, and humorous, by turn. His criticism of the course of the police investigation in Sutcliffe demonstrates (as if it were needed) the danger of targeting (or closing one’s mind to other possibilities). Lives were lost as a result of single minded pursuit of a particular case theory. Sir Harry attributes the fact that Sutcliffe was at liberty to commit at least 13 murders and 7 attempted murders to “a combination of luck and prolonged investigative incompetence”. This is not to say that all involved were incompetent but, from this account, there was enough incompetence to go around.

On the lighter side, from his days as a junior, Sir Harry recalls sitting in a magistrate’s court, waiting for his case to be called, when a self-represented defendant was strongly advised by the chairman to seek legal representation:

-“The Bench thinks that you would be well advised to have the services of someone who is better known locally.”

Sir Harry speaks less of his time on the Bench, naturally.

But his account of the adjectival facets of life as a High Court Justice in London, and on circuit, is of interest.

There are a few specific cases noted. I was challenged by his account of the trial of Dr Cox, on a charge of attempted murder connected with the death of a patient. This seemed to have been euthanasia, at the urging of some loved ones concerned at the continued suffering of the patient.

And he gives an account of his treatment by the press, on discharging an accused, Mr Colin Stagg, who had been charged with murder based on a remark in extensive pretext calls from a police officer. It seems that no apology was forthcoming from the Press when, years later, forensic evidence and a confession established that the murderer was someone altogether different.

The attention from the Press was highly focused and lengthy, at the time of the discharge of Mr Stagg, but nonâexistent when the true murderer was exposed.

He also expresses concern about the ability of an accused to defend a case brought many years after an alleged event (p 141). While not minimising the nature of the crimes that might be charged, Sir Harry gives trenchant reasons for caution in this difficult area.