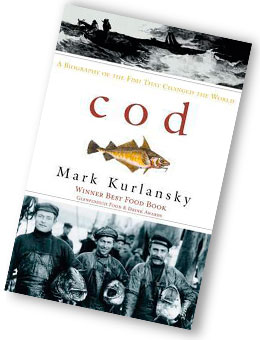 Sometimes the one-word title tells you all you need to know about the journey that awaits within the covers. Havana is enough to conjure Castro, Kennedy, colour, Cadillacs and the happy chaos of the place. The book promises an historical and social portrait of that elegant, tattered city and it delivers.

The same cannot be said of the word Cod. Even taken with its subtitle, A Biography of the Fish That Changed the World, to buy the book and read it requires a leap of faith. Having been introduced to Kurlansky’s writing in Havana, for me the leap was a small one. Even so there lingered the fear I would become a victim of the literary equivalent of Monty Python’s fish-slapping dance.

I need not have worried. Cod is a journey through time and space and learning. The kind of book that traverses culture, cooking, history, politics, science, war and law. It tells the broad story of this northern hemisphere fish whose once vast numbers have crashed perilously this century. The story of how cod inspired exploration, generated territorial claims, fed the slave trade and caused war is almost too expansive to be bound within this eloquently written tome. But Kurlansky does it by plotting smaller, intersecting tales and reflecting the big stories in the details of history and life.

For example, he begins with an affectionate portrait of three fishermen boarding an open-decked skiff in Petty Harbour, Newfoundland, and setting out into the dawn. They are not commercial fishermen, those days are gone, but part of the Sentinel Fishery whose role is to monitor the number and condition of the cod.

‘They head out to sea. Sam, a small dark-haired man, with a touch of rose on his clean-shaven cheeks, is stuffed into his scarlet flotation jacket. Leonard is in the little pilothouse, while Bernard, in his flame orange overalls, stands with Sam on the open deck looking contemplatively at a flat sea of dark, polished facets’. And so the journey begins where it will later end: with the author contemplating how a natural resource once thought to be inexhaustible has all but disappeared.

Kurlansky introduces us to the hero, Gadus morhua, cod. ‘It is built to survive. Fecund, impervious to disease and cold, feeding on most any food source, travelling to shallow waters close to shore, it was the perfect commercial fish …. Cod should have lasted forever, and for a very long time it was assumed that it would.’ The fish may have eventually succumbed to the irresistible pressure of modern mechanised fishing, but it shaped history and left its mark on the world along the way.

The fish has changed the world ever since the middle ages when it was first caught commercially: Basques learned to salt their catch giving them a nutritious food source that would not spoil, enabling long whaling and commercial voyages. When rich fishing grounds were discovered in the North Sea, off Iceland and New England, the cod’s world-changing influence expanded and amplified. Cod fishing proved lucrative, founding early American commercial enterprise and motivating the independence movement that would free the colonies. Paradoxically, second-rate salt cod from freedom-loving New England helped sustain the slave trade. Known as West Indian cure, it fed the rapidly growing slave population toiling in the sugarcane of the Caribbean.

Cod have caused conflict and influenced law too. In 1950 declining cod stocks motivated Iceland to challenge international law by expanding their claims over the surrounding seas. The move pitched England and Iceland into three fishing wars that saw the Iceland Coast Guard cut nets, fire upon an English tug and ram English and German fishing vessels. Miraculously there were no casualties and by 1975 Iceland extended its ocean claim to 200 miles offshore. After this, most countries claimed such a zone.

Kurlansky describes cod’s role in world affairs in a clear and scholarly fashion; but he explores the fish’s part in culture and cuisine more playfully. Mysteries are explained: ‘In much of the cod-eating world, there are myths about cod heads because the head is rarely seen. According to a medieval Catalan legend, the cod’s head is removed to conceal the fact that it is human.’ We learn that the question of how to resuscitate a piece of hard cured cod is not settled, although soaking in milk and water, and beating with a wooden hammer are popular choices. We learn how to boil cod sounds (air bladders), stew cod tongues, and more helpfully, how to panfry a cod fillet.

Cod is a journey I recommend you take. Like any good journey there is fun and learning along the way, but sadly, in the end there is also the lesson that the world of cod is not what it once was.