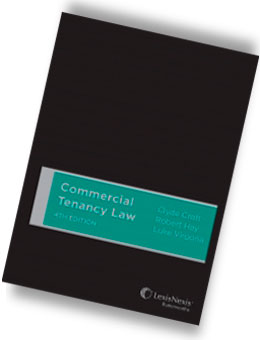 As noted in the preface, Commercial Tenancy Law is a comprehensive analysis of the substance and application of the law of commercial leases. The book covers the relationship of landlord and tenant, lease formation, construction of leases and lease terms and breach. While focus is predominantly on the common law, the relevant retail shop leases legislation for each State is addressed separately in the final chapters.

As noted by the authors, the 4th edition has "grown out of its predecessor edition". It follows the same format and has the same chapter and section headings which ought provide comfort for those already familiar with its contents.

It is evident from the first few pages that the text includes updated case and legislation references. Accordingly, Commercial Tenancy Law assists the reader to comprehend not only the historical development of the law but the modern iteration of it. For example, the discussion of leases created by estoppel contains an extraction from the judgment of Nettle J in Crowne Melbourne Ltd v Cosmopolitan Hotel (Vic) Pty Ltd (2016) 90 ALJR 770 at 810-811 discussing both promissory and proprietary estoppel to illustrate the modern articulation of the dichotomy that exists and the continuing complexity of its application.

While the 3rd edition canvassed the Trade Practices Act, the 4th edition has been updated to reference the Competition and Consumer Act and the Australian Consumer Law. In addition, where the common law was affected by a specific section of legislation that has since been repealed (for example Part V of the Landlord and Tenant Act 1958 (Vic)) the authors have noted that repeal in text. Helpfully, where a particular topic dictates a deeper understanding may be required, references to additional texts are provided to aid the reader (for example references to authoritative contract texts are included in the chapter headed Leases as Contracts).

Of specific interest to Queensland practitioners, as would be expected from Victorian authors, for the most part the discussion focusses on Victorian legislation. However, Commercial Tenancy Law has national relevance as the authors have, where there is corresponding provisions in the other States, included those provision as in-text references.

Commercial Tenancy Law is an academic text that successfully provides an in-depth analysis of, as its title suggests, commercial tenancy law. It is not a text for "practical guidance" and does not purport to be one.

Given developments in the law since the 3rd edition which was published in 2009, the 4th edition of Commercial Tenancy Law is a worthwhile update to any law library and, as a text, will prove a useful weapon in the arsenal of any practitioner whose practice touches commercial leases.