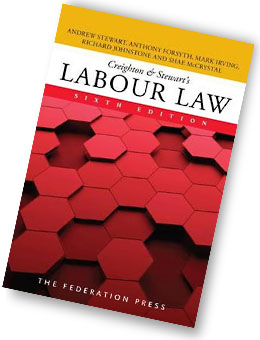 Federation Press rightly salutes the original co-authors of Creighton & Stewart’s Labour Law by incorporating their names in the title of its sixth edition. The work thus enters that pantheon of venerable and enduring legal publications that, by their titles, pay homage to the vision and scholarship of the authors of their first edition.

It is a mark of the productivity of retiring author, Breen Creighton, that he has been replaced with no less than four authors – including Richard Johnstone from Queensland University of Technology. Queensland specific content is evident throughout the work – something often lacking in works that purport to provide commentary on a national and state level.

The work is truly comprehensive and ranges from a discussion of historical and theoretical perspectives through to detailed treatment of all of the specific areas of employment and industrial law likely to be of interest to students and practitioners alike. It is a “go-to” text which can serve to assist practitioners to gain a level of understanding of a particular area of controversy in order to progress their own research.

The authors have usefully directed the reader to other references on particular points where the reader may need to delve more deeply into a topic. For example, the treatment of post-employment restraints includes a footnote directing the reader to other illustrative cases contained in four other works.

Since the last edition, there have been a number of important decisions in labour law, including Commonwealth Bank of Australia v Barker (2014) 253 CLR 168 (Barker) which settled the question of whether the common law of Australia implied a term of mutual trust and confidence into employment contracts.

In Malik v Bank of Credit and Commerce International SA [1998] AC 20 (Malik), the House of Lords confirmed, for the United Kingdom, the existence of an implied term of mutual trust and confidence. The authors point out that, since then, Malik has been applied in New Zealand, Canada, Bermuda, South Africa, Hong Kong, Tonga, Vanuatu and Fiji.

However, the High Court of Australia distinguished the regulatory employment landscape in the UK in holding that it was unnecessary to imply a term of mutual trust and confidence to employment contracts in Australia.

There is an ever expanding section dealing with general protections applications under the Fair Work Act, including a useful section on proving reason and intent: an area which is still creating a large volume of appeal work for the Full Court of the Federal Court in the wake of High Court decisions in Board of Bendigo Regional Institute of Technical and Further Education v Barclay (2012) 248) CLR 500 and CFMEU v BHP Coal Pty Ltd (2014) 253 CLR 243.

The treatise includes a discussion of the extent to which the Australia Consumer Law provisions with respect to misleading, deceptive and unconscionable conduct have application in the employment context. Likewise, other issues which arise from time-to-time in a practical context are all dealt with sufficiently to orientate the practitioner to the present state of play, including: various unfair contracts provisions, recent anti-bullying provisions, privacy in the workplace, right-of-entry for union officials, and protected industrial action.

The work includes a satisfactory introduction to the so-called “industrial torts” including interference with contractual relations, conspiracy and intimidation. Possible causes of action in the context of picketing and boycotts are not neglected.