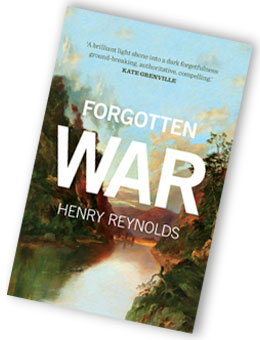 Good books excite the mind but great books stir the heart. Forgotten War is such a book.

On Sunday 18 March 2018, The Honourable Justice Stephen Rothman AM, Supreme Court of New South Wales, spoke at The Public Defenders Criminal Law Conference in Sydney. His topic was ‘Disadvantage and Crime: The Impact of Bugmy & Munda on Sentencing Aboriginal and Other Offenders’. He began, rather devastatingly, with the following:

‘West of Gosford and west of the Sydney-Newcastle Freeway, there is an area upon which there lived Aboriginal people. Their language and culture, while similar to those in surrounding areas, was distinct. There is no living descendant of that people. There are remnants of their culture; drawings; carvings; middens and the like. This nation, this people, was exterminated. Some died from disease. Most were murdered by hunting parties, organised sometimes for sport, sometimes after church, much as the English hunted fox.

With great respect to many leaders of our society, with very few exceptions, in Australia, white Anglo-Saxon heterosexual males have no understanding of discrimination. Even the exceptions understand it from an observer’s perspective; not from personal experience.

For a more complete history, I recommend Forgotten War by Henry Reynolds.’ [1]

I took His Honour’s recommendation. Henry Reynolds’ scholarship is not unfamiliar to me. He taught me Australian History at James Cook University and once chastised me for cheekily referencing one of his works with the descriptor ‘this brilliant work’.

Forgotten War, along with its companion book, The Other Side of the Frontier, are essential reading for anyone seeking a more complete understanding of European settlement of and in Australia. Whereas Frontier explores the trade, communication and conflict between Aborigines and settlers, Forgotten War concentrates on the conflict.

Reynolds’ work is inescapably troubling. He argues that Australia’s settlement was characterised by frontier conflict that burned northward across the continent and lasted over a hundred years. He contends that this conflict between settlers, police and troops, on the one side, and Aborigines, on the other, was, in truth, a war.

In this context he asks, why, in a country that defines its history and character through wars, is this war forgotten? Reynolds’ book cannot answer the question, but it starts the conversation.

To begin, Reynolds, carefully and unflinchingly, goes about building the argument that European settlement of Australia was by force. In the chapter, ‘But was it Warfare’, he contends frontier conflict was war, unconventional, to be sure, but war nonetheless. He argues this war at the fringes of settlement was often characterised by three phases: initial uneasy coexistence of settlers and Aborigines, followed by Aborigines resisting settlers’ efforts to imbed and expand settlement, finally, ending with retaliation that subjugated, removed or killed the resident tribes.

Reynolds uses the accounts of settlers and officials to make his argument. What emerges is a portrait of harried and often fearful settlers pushing into foreign territory in the face of tenacious resistance aimed at destroying crops and livestock and killing settlers. Time and again, Reynolds discovers the language of war describing the conflict.

From the beginning, settlement was resisted. Constant attacks on parties working on the edges of settlement led Governor Phillip to express his frustration at ‘this state of petty warfare and endless uncertainty’. [2]  One insightful characterisation of the conflict comes from Lieutenant David Collins. At a time when settlers responded to threats by firing volleys at resident Aborigines, he wrote:

‘It was much regretted that any necessity existed for adopting these sanguinary punishments, and that we had not yet been able to reconcile the natives to the deprivation of those parts of this harbour which we occupied. While they entertained the idea of our having dispossessed them of their residences, they must always consider us as enemies; and upon this principle they made a point of attacking the white people whenever opportunity and safety concurred.’ [3]

This truth was repeated across the continent for the next hundred years. The ragged line of settled territory was a bloody one. Aboriginal resistance was constant and devastating to settler morale, enterprise and life. Retaliation became more organised and destructive.

While the description of the conflict as war remains controversial, the cost of the conflict is becoming clearer with recent interest and scholarship. Reynolds’ chapter, ‘The Cost of War’, explores the damage wrought in human life and property. Reynolds reckons that as many as 2,500 settlers were killed in frontier conflict with as many wounded or scarred from encounters. [4] While the number of Aborigines killed is more difficult to calculate, estimates across the continent reach the tens of thousands. He frankly concludes, ‘We will never know how many Aborigines died directly or indirectly as a result of the conflict, how wide or how deep was the line of blood.’ [5]

The destruction of settlers’ property is often more meticulously calculated and documented. Tens of thousands of cattle and sheep were slaughtered and acres of crops taken or destroyed. The result in many marginal districts was that further settlement was delayed and curtailed. As to the effectiveness of resistance, Reynolds says:

‘The evidence is bountiful and clear. Aboriginal resistance to the intrusion of settlers into their country was widespread and persistent. It was common to almost every part of Australia and continued for well over a century. It was one of the most enduring features of the nation’s history. It was apparent whatever the economic activity undertaken by the settlers – pastoralism, agriculture, mining or pearl fishing. The resistance was put down everywhere sooner or later, often with great brutality and loss of life.’ [6]

Because the frontier constantly moved, the conflict progressively consumed new settlers and new Aboriginal groups and, because settlement took many years, the conflict endured across the country and the centuries. By the time the frontier stretched in a ragged line across northern Australia, Aboriginal resistance was revenged by punitive parties consisting of well armed mounted native police and frontiersmen. Aboriginal communities were devastated and survivors dispersed.

Above all the evidence of prolonged and violent frontier conflict, for Reynolds, the question burns: where are the memorials to the fallen, the invocations of their capacity and courage? He explains that, of Australia’s many memorialised wars, only the World Wars incurred casualties beyond the hundreds. He concludes, ‘To find the appropriate place for the frontier wars in this grisly table, we should begin with what would now be considered a conservative estimate of between 25000 and 30000 Aboriginal and between 2500 and 3000 settler deaths. The figures speak for themselves.’ [7]

Scholarship of the kind undertaken by Henry Reynolds challenges the comfortable notion of our ‘settled’ country. It gnaws at the easy ignorance that, for two hundred years, underpinned the doctrine of Terra Nullius. Forgotten War goes further: it invites us to recognise and applaud the courage and tenacity of those Aborigines who defended their lands against impossible odds and to recognise the cost to them and to their descendants.

[1] This extract is included with the permission of The Honourable Justice Rothman AM, Supreme Court of New South Wales.