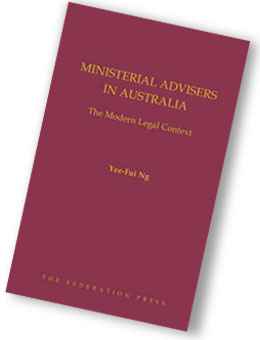 The book is structured into an introduction and four chapters: Introduction, Chapter 2, which is the factual background, Chapter 3, headed “Regulation Through Law”, Chapter 4, “Regulation Through Parliament” and the conclusion in Chapter 5. Each of these substantive chapters, 2, 3 and 4, then, has headings and sub-headings within the chapter. In Chapter 2, the proliferation of advisers and the historical background to their role is articulated. The reader is introduced to the personal appointment of an adviser by the relevant minister, pursuant to Part III of the Members of Parliament (Staff) Act 1984. In Chapter 3, the work contextualises ministerial advisers within the constitutional ‘construct’ and, in doing so, makes reference to judicial review. Chapter 4 considers other statutory requirements and relevant precedent.

Dr Yee-Fui Ng completed a doctorate in law at Monash University in 2015. The thesis analysed the impact of media and ministerial advisers on contemporary executive government. This book ‘draws upon’ that detailed research and other relevant articles by the author, including Dispelling myths about conventions: Ministerial advisers and parliamentary committees in Australian Journal of Political Science (2016) 51, 512 — 529. Prior to commencing as an academic at Monash, ANU and now, RMIT, Dr Ng was a policy adviser at the Department of the Prime Minister and Cabinet in the period 2009 to 2010. Subsequently, Dr Ng worked as a Senior Legal Adviser at the Victorian Department of Premier in 2010 and 2011.

This work succinctly analyses relevant legal principles and is supported by evaluation, based upon primary interviews with former ministers. Throughout the work, there is an underlying theme as to how and whether ministerial advisers operate within the system of responsible government. This work suggests that the use of such advisers has, indeed, led to an “erosion of the Australian system of responsible government”.