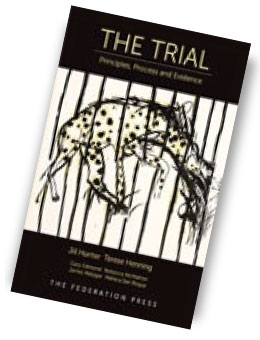 Hi fi enthusiasts will be familiar with the technical term “cross over network”. It means a circuit that enables loud speaker systems to work over a wide range of frequencies.

I thought of this term many times as I considered this book. Nicholas Cowdery QC in his foreword, says, “The authors of this book expose and thoroughly explain the whole trial process for the benefit of law students, law teachers, lawyers, judges and if they have the time and application – the public”.

I agree with this. You will instantly see the relevance of my term “cross over” as the book offers something for every student of the law, not just for undergraduates. And aren’t we all students of the law?

The focus of the book is predominantly on criminal trials. However, much of it is apposite to civil trials, particularly, the extensive commentary on the Uniform Evidence Act provisions.

As a barrister, I found it interesting to read how our workplace is seen from the academic perspective. I suspect that I was prepared to think that academic lawyers would have little understanding of the “how” as distinct from the “why” we carry out our work in Courts. But this book does not suffer in that way. Rather, it contains intriguing, disciplined, well researched analyses of a large number of cases, in a way which enables the reader to gain a greater understanding of both the “how” and the “why”, whilst demonstrating a detailed understanding of the practical side of the “why”.

As Cowdery QC says, “it is a book which lay people would benefit from reading”. For that, might I add journalists who cover the Courts as it is a source of nightly frustration to me to hear their disjointed and unenlightened commentaries on the latest court trial sensation.

This book cites the relevant facts and background to cases and then follows them through from trial, to appeal and, in some cases, to the High Court. Where appropriate, the authors leave hanging a question, such as,
“Did his honour err in relying on the Evidence Act provisions?” (page 78 in reference to the case of El- Zayet [2014] NSWCCA 298).

That case is found in a chapter which deals with client legal privilege. This chapter is but one of the chapters of the book which might remind us, or even educate us, as to the state of the current law in relation to privilege. The topic must be considered in the light of the Uniform Evidence Act.

I also, particularly, recommend the section that considers when evidence solely relevant to credit is admissible. The authors cite some factual examples, for comparison, such as a statement made many years earlier versus the same statement made contemporaneously to the events in question.

It is always difficult to find the time to read and digest a book on a subject which we might be tempted to think we know well. For those of us who have many years experience in trial litigation, particularly, in criminal work, there might be a temptation to think that we would not benefit from such a book.

I think that, for myself at least, it serves as a reminder of how far the law of evidence relating to (amongst others) admissibility of hearsay statements, the issue of fairness to witnesses, the use of character evidence, the right to silence in police interviews and the accompanying right not to give evidence and even to the role of the judge in evaluating witnesses, has altered in recent times and provides us with a greater understanding of the present state of the law that we do need to know in depth if we are to practise in Court.

It is also worthwhile to reflect on the rule in Browne v Dunne, [1] and that in Jones v Dunkel, [2] in the light of the Uniform Evidence Act.

I might add a few words of minor criticism. It is a personal complaint of mine, that the word “summation” is galloping into our language. On some occasions in the book under review, it is being used in place of “description”. But I decry Americanisms however used. The other is the occasional slip into unnecessary vernacular, such as at page 382, “Precedent generally involves an accused who bunks off during the trial”.

Finally, I need to acknowledge that I used to know Terese Henning, who worked for me over 25 years ago. It is rare for a reviewer to know an author so, when this occurs, I prefer to acknowledge this fact.

As Cowdery QC suggests, we can all benefit from considering this book. I look forward to the day when I see a journalist reading it, whilst waiting for a judge to come into Court!