Book Review: Where the Air is Clear 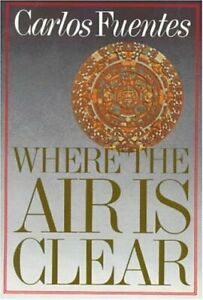 Book Review: Where the Air is Clear

It was inevitable that, once I had started reading The Life and Times of Mexico by Earl Shorris, I would, eventually, read Carlos Fuentes’ portrayal of Mexico City, ironically, named Where the Air is Clear.

Where the Air is Clear is described by contemporary Mexican novelist, Ignacio Padilla, variously, as seeking to explain a world by unmasking it; as baroque as it needs to be; and as having a complexity that may scare the reader. Padilla says, however, that, despite the epic writing it contains, Where the Air is Clear is not an epic book. The characters are not symbols. And there is no main character but Mexico City, itself.

Where the Air is Clear was published in 1958. It looks back from the years of its composition as far as Mexico’s revolution (which occurred roughly in the decade after 1910). By looking at the society that had emerged by the fifties, and at the trajectory of the lives of those whom the revolution had touched and formed, Where the Air is Clear does, indeed, unmask the previously uncontradictable myths that had formed about the revolution and the society it had spawned.

Both Padilla and Shorris have described the impact of Where the Air is Clear on Mexican and Latin American literature. They describe a pre-existing state where Latin American writing had no place in world literature except as local photographers. Shorris also describes the phenomenon of Latin Americans only being able to see themselves through the eyes of, and in terms dictated by, the colonising society.

Where the Air is Clear had played a crucial role in creating a new Latin American literature which could extoll its own Latin American vision and language and, at the same time, take an honoured place in world literature.

For Fuentes, the task was particularly vexed. Part of the process of freeing Latin American literature had been performed, a few years earlier, by Juan Rulfo when, according to Padilla, he dazzled the world with his short but amazing Pedro Paramo . By its brilliance, Pedro Paramo made it seem that Mexican writers, at least, could only find a voice in the future through magical realism potrayed so persuasively in Rulfo’s cinematic novel.

It took both self-belief and imagination, in that context, for a thirty year old employee in the Mexican diplomatic service to show that a complex piece of gritty realism, albeit, showing the same lack of respect for a single time line as did Rulfo’s work, could take its place as part of the new world literature of the Latin American continent. With the perspective of 57 years, we can conclude that Fuentes had both qualities in spades.

The complexity of the portrayal of Mexico City attempted by Fuentes is obvious to the reader as she embarks upon the text. Fuentes devotes a little over five pages to listing the characters who will be seen within the text. They are grouped according to a number of families and then by class: bourgeoisie, foreigners, intelligentsia, working class and, finally, the revolutionaries.

The last two characters, described as overseers, Ixca Cienfuegos and the widow, Teodula, are the embodiment of Fuentes’ lingering attachment to magic in his realism. They are described and grouped as “Overseers”. One suspects that the original Spanish pointed more to one who looks over everything and sees all that is happening than one who imposes discipline on slaves or oppressed servants.

The reader never quite knows whether Cienfuegos and Teodula are spirit forms despite their human needs. Cienfuegos, especially, is no saint. They guide and challenge other characters and, on occasion, change the course of events. Though they are not narrators of the novel, one suspects that the overseers do have access to omniscience.

Where the Air is Clear commences with a passionate monologue from Cienfuegos. The two full pages of monologue commence with: “My name is Ixca Cienfuegos. I was born and I live in Mexico City. Which is not so bad: in Mexico City there is only outrage, never tragedy. Outrage at the blood that stings like maguey thorns. Outrage at the spreading paralysis that stains and clots every dawn. And my endless fatal leap towards tomorrow. ”

It ends with “… city woven by amnesias, bitch city, sumptuous villa, leper city. Incandescent prickly pear. Eagle without wings. Here we bide our time. And what are we going to do about it? Where the air is clear.”

“Where the Air is Clear” is said to be the phrase used to describe the Valley of Mexico by Prussian geographer and explorer, Friedrich Alexander von Humboldt , who visited and lived in Mexico City at the turn of the 19th century. The phrase had been re-used by Alfonso Reyes in Vision de Anahuac published in 1917. But Reyes was dramatizing a visit to the Valley in 1519. The phrase used as the title of Fuentes’ novel in 1958 was pure irony. It remains so, nearly 60 years later.

The frivolous nature of bourgeois Mexican society is portrayed most starkly by the parties held, more often than not, by Bobo Gutierrez, described in the list of characters as financier and organiser of parties. The parties are frequented by people like Junior, the son of a self-made millionaire and his current girlfriend, the philosophy student, Pichi, and the foreigners including Prince Vampa, an Italian cook who pretends to be nobility.

But they also attract intellectuals like Manuel Zamacoma, the famous poet. Many of the characters about whom the novel revolves find their most dramatic moments at the parties.

Where the Air is Clear is a novel about Mexico after the Revolution. That context is created by depiction of the Revolution, itself. On the day that General Gabriel Hernandez, a Madero loyalist, was actually executed in March 2013, Fuentes depicts the escape and subsequent experiences of Gervasio Pola, another Madero loyalist who seeks to link up with Emiliano Zapata , and his small band of loyal supporters. The son of Gervasio Pola, who never saw his father alive, Rodrigo Pola, struggles with his heritage and his ambition to become a famous writer. Rodrigo also frequents Bobo’s parties. Among Rodrigo’s many frustrations is that his love for Norma Larragoiti has not been blessed. One gets the impression that it is not that Norma does not find him attractive but, rather, it is what he has to offer in wealth and importance that fails to match Norma’s calculations.

The Revolution is also depicted through the reminiscences of Frederico Robles: the stories of the Rio Blanco massacre of textile workers by the government in January 1907 told by the party organisers who visited his peasant and radically minded family in the lead up to the Revolution. His own reminiscences included peasant women, in the very area where his own family eked out a starvation living, being treated as animals to be exploited by the sons of the local haciendado. Robles, unlike Hernandez and Gervasio Pola, knew which side to be on and when to change during the years of the Revolution. He came out of the decade of civil war as a winner in the new status quo. He became a lawyer, an adviser to foreign companies investing in Mexico and a banker. He appeared to have retained his skill of knowing which sides of most transactions to be on.

Robles and his beautiful wife, Norma Larragoiti, could also be found at Bobo’s parties although each had taken their own lover and their continuing under the one roof was more a matter of mutual convenience than any remaining traces of affection.

Where the Air is Clear depicts as central characters the winners in the post Revolution realignments such as Robles and Larragoiti. But a city which had swelled in numbers as a result of poor peasants seeking a better life in the Capital cannot be described adequately without representation of those further down the pecking order and whose struggles for advancement and mere existence are played out more acutely on a daily basis.

In the very first scene of action that follows the Cienfuegos monologue, cabaret dancer, Gladys Garcia, leaves her place of work and steps out into the cold morning air and makes her way along Guerrero Street avoiding both dead dogs amongst the garbage and sleeping street children stirring in their nests of magazines and newspapers. She is about to turn thirty and wonders how she will manage to make a living as the years take away her remaining youthfulness.

Among those designated the working class among the list of characters, are taxi driver, Juan Morales and his wife, Rosa, and their three sons, Pepe, Juan and Jorge. Early in the novel, the family have the unusual experience of dining in a restaurant. Juan has had good fortune. One of his passengers has had a lucky day at gambling and an unusually generous tip was bestowed. The family are out to celebrate.

Throughout Where the Air is Clear, the atmosphere is created and enhanced by reference to popular songs of the time and ageless classics punctuating the interactions between the characters. In the restaurant scene, Juan’s generosity extends to allowing the boys to choose what song the mariachi band will play. They unanimously choose an old favourite, Juan Charrasqueado . And the lyrics of a sentimental story about the death of a man who devoted himself to seducing other men’s wives, and who is shot when drunk in the tavern by the enemies he had made by his seductions, intersperse, in the text, the family’s subsequent enjoyment of their great night out.

Despite bending under the impact of a devastating flow of fate, the family of Juan Morales survive to play important roles, throughout the novel, and Cienfuegos notices the boys and has tasks for them to perform.

Though the action switches back and forth in time, as the focus shifts to different characters, the plot lines develop and discernibly move forward across the novel.

Cienfuegos’ concept of “only outrage, never tragedy” strikes not only the working class families like those of Juan Morales. Senseless death strikes often in Mexico City and its environs and several middle class and opportunist families also suffer its impact during the traverse of the novel.

Others fall from grace. Some find unexpected success.

But much stays the same.

An older Gladys Garcia appears in the very last scene of Where the Air is Clear. She stops on the Nonoalco Bridge in Tlatelolco. She lights her last cigarette and lets the match drop. The voice of Ixca Cienfuegos comes through the dawn air of dust and wisps of gasoline and alcohol and says to Gladys, alone: “Here we bide. What are we going to do about it? Where the air is clear.”