It has been observed that the Ancient Greeks conceived of nature as bound by a law of limitation and in their free-republics emerged the philosophical idea of nature “as a self-sufficing orderly universe, developed on impersonal lines, undisturbed by arbitrary volitions of supernatural beings”.[2]   That viewpoint was very different from the cultural settings of the Eastern civilizations of the time with the notion of personal rule by a master, answerable to no-one; or rule where a priesthood “preserved the tradition of a celestial autocracy”.[3]

Even so, the Ancient Greeks understood the value of the scientific advances made by the Eastern civilisations, with which they came into contact.  Those advances, in arithmetic, geometry and astronomy, had been encouraged largely as an adjunct to and embedded in religion, but with the Ancient Greeks not having a priestly class to regulate such knowledge, they were free to further develop this advanced learning from the perspective of “pure speculative curiosity”.[4]

The cultural exchange between East and West continued to the great benefit of the West in the Middle Ages.  For it was from the East, through the Syriac and Arabic translations, that the works of the Greek philosophers were able to be revived in the West.[5]  The 12th and 13th centuries saw works, such as Aristotle’s writings on metaphysics, physics, politics and ethics, become widely known in the West.  The newly available works created what has been described, as a “firestorm” amongst theological and canon law scholars.[6]  Throughout the Middle Ages, Aristotle was referred to as “the Philosopher”. No one matched his statute and influence. In this context, the contribution of Thomas Aquinas was particularly significant. He sought to synthesise Aristotelian philosophy with the religious tradition and principles of Christianity.  The 12th century has been described as “the century in which the Western legal tradition was formed”,[7] with Canon law being said to be the first modern system of law.[8] 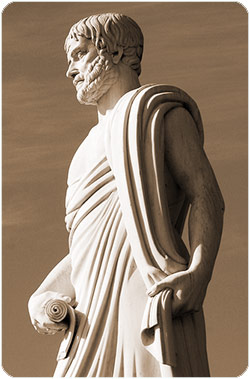 Aristotle’s contribution was revisited in the 16th and early 17th century by a group of theologians and jurists, known as the “Late Scholastics” or the “Spanish Natural Law School”.[9] They analysed Roman law by applying the larger philosophical ideas of Aristotle, as interpreted by Aquinas.  In that way, they developed a systematic moral analysis of the ethical issues arising from everyday problems, for example those to do with trade and commerce.

The 17th and 18th centuries saw the doctrine of the Late Scholastics taken over by the great jurists of the Northern Natural Law School such as Grotius, Pufendorf and Barbeyrac.[10]

The blooming of scientific inquiry in the 17th century was connected with the realisation that new discoveries and ideas were open in all fields and the freeing of thought from the constraints that had come to be associated with ancient knowledge.[11]   Inevitably, this intellectual flourishing coincided with a eroding of papal authority[12] and a questioning of the immutable laws of nature on which natural law is based.[13]  The new generation of intellectuals questioning the primacy given to Aristotelian philosophy was led by Descartes, Hobbes and Locke.

As Justice Kiefel has mentioned, against a background of religious wars and conflict, including the devastating 30 year war which at some stage involved every European power,[14] the 17th century saw the development of the Law of Nations placed on a scientific footing, notably by Grotius.[15]  It also saw “a definitive expression of the social contract, as one binding the ruler as well as the ruled on a conditional structure of trust”, along with the development of the concept of individual natural rights that would so influence the 18th century.[16]

Commentators have observed that the origin of the similarities in doctrinal structures between the civil law and common law systems is something of a mystery.[17]  In terms of the common law, Maitland recognized that the judges who created the English forms of action did not have “‘the great elementary conceptions’ such as ownership, possession, contract and the like distinctly in mind”.[18]  Likewise, others have observed that Roman law contained particular rules but without any intellectualised system.[19]

While English scholars have sometimes had a bias against foreign influence, it has been well established that a marked change in the common law did occur in the 19th century.[20]   It was a period when, for the first time, the jurists of the common law sought a doctrinal system for the organisation of rules and principles.[21]   Some have suggested such a system was developed through “borrowing extensively from natural law jurists such as Grotius, Pufendorf, Boreyrac, Domat and Pothier”.[22]   The drafters of the French Civil Code certainly borrowed from these scholars, and particularly from Pothier and Domat.[23]  German jurists have also acknowledged the debt owed to the 17th and 18th century natural lawyers.[24]

Thus, legal historians have acknowledged the role played by the 17th century natural lawyers in the development of the doctrinal systems of the 19th century in the civil law and their influence on the common law.[25]   The thesis has been put forward by the great scholar Professor James Gordley that those 19th century jurists borrowed from the medieval scholastics, who had given Roman law a systematic doctrinal organization, using Aristotelian concepts as refined by Aquinas.[26]  Their work was further developed in the 19th century.

These 19th century common law and civil law doctrines, with various modifications, have spread through different legal systems and been adopted throughout the world, as Justice Kiefel has observed.

Justice Kiefel’s speech highlights how fascinating have been the legal influences across centuries and borders.  I thank Justice Kiefel for selecting such an interesting topic on which to address us, and for her insightful, erudite and absorbing oration.

* Presented as the closing address at the 2016 Clayton Utz Alexander Christy Freeleagus Oration, in response to the paper presented by the Hon Justice Susan Kiefel AC.

[5]        Larry Siedentorp, Inventing the Individual: The Origins of Western Liberalism (Penguin, 2014) 298. The motivation of the translators and their patrons was not just one of benefitting in a practical way, but reflected also a wide intellectual curiosity:  Albert Hourani, A History of the Arab Peoples (Faber and Faber, 1991) 76.

[13]       Ibid 223.  Ironically, the influence of the Canon jurists with their emphasis on the equality of the individual played a significant part in corroding papal authority: Siedentop, above n 4, 237-241.

“In 1888, in his Inaugural Lecture as Downing Professor at Cambridge University, Maitland raised the question ‘why the history of English law is not written.’ His answer was, first, ‘because of the traditional isolation of the study of English law from every other study,” and second, because “history involves comparison and the English lawyer who knew hardly nothing and cared nothing for any system but his own hardly came in sight of the idea of legal history.” “One of the causes why so little has been done for our medieval law,” he added, “is, I feel sure, our very complete and traditional consecrated ignorance of French and German law. English lawyers have for the last six centuries exaggerated the uniqueness of our legal history…I know just enough to say this with confidence, that there are great masses of medieval law very comparable with our own.”

[21]       Gordley, above n 5, 4.In the 18th century, Blackstone was notable for being almost alone in trying to produce an intellectual explanation of the common law: James Gordley, Foundations of Private Law (OUP, 2006) 44.