From the ashes: the Supreme Court fire of 1968

From the ashes: the Supreme Court fire of 1968

On 1 September 1968 the historic Queensland Supreme Court building was set alight by arsonist David Brooks, leaving much of the building in ruins, and seriously damaging library books and portraits hanging in the Judges’ Hall.

Our unique legal heritage collection contains many items from this period, and they are now on display in the library to mark the 50th anniversary of the Supreme Court fire.

From the ashes: a brief history

In the early hours of a cold Brisbane morning in 1968, David Bertram Brooksâa man ‘sour on the world’âentered the unlocked front door of Queensland’s historic Supreme Court.

Resentful of the police and the justice system for his frequent arrests, Brooks made his way to the judges’ chambers and set the building alight. On his way out, he drove a knife into an associate’s desk and scribbled the note ‘judge not lest you be judged sinner’.

By the time the fire was brought under control, much of the building was in ruins. Many of the Supreme Court Library’s books were seriously damaged by fire, smoke and water.

In the days following the fire, judges, their associates, members of the legal profession, and law students from The University of Queensland diligently searched through the charred rooms to salvage books, court records, artworks and personal effects. Only the registry could operate from the burnt building, which it did through a side window. The few judges’ chambers still safe were used to hear civil matters, and other Commonwealth courts in the city were co-opted for use.

Brooks was apprehended within three days of the fire, and convicted within three months of the crime. The building’s fate took longer to resolve. It was not until 1978 that the old courts were finally demolished, and a new Supreme Court was opened in 1981. 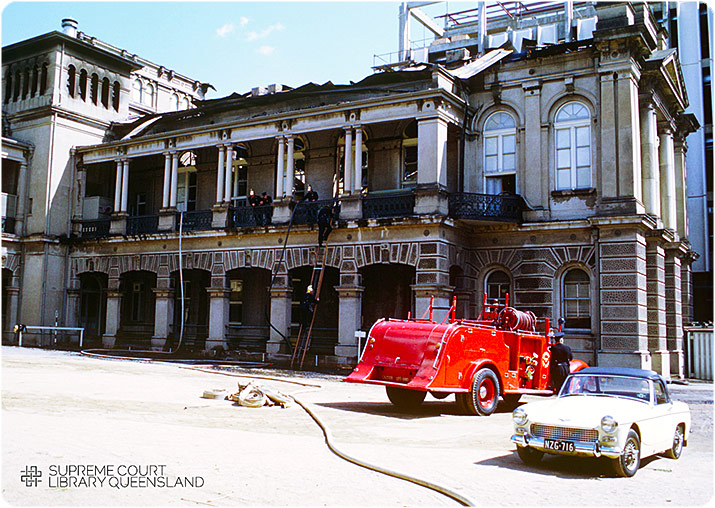 Supreme Court building after the 1968 fire. Courtesy of and copyright the Hon Kenneth Mackenzie. Donated to the Supreme Court Library heritage collection by His Excellency the Hon Paul de Jersey AC.