Your attendance, and that of your Bar Associations, acknowledges the position of this Court at the apex of our judicial system. It is fitting that on your appointment as Senior Counsel for your State or Territory you make this journey to the Court and have your appointment as Senior Counsel announced to the Court. To do so is to acknowledge the relationship between the courts and the Bar, and that a barrister’s first duty is to the court. The strength of the relationship between the courts and the Bar has long been a significant feature of our legal system. The discharge of the work of the courts would be much more difficult were they not able to rely upon counsel to conduct litigation efficiently and in accordance with the high standards of conduct and ethics which may be expected of members of the profession of barristers. 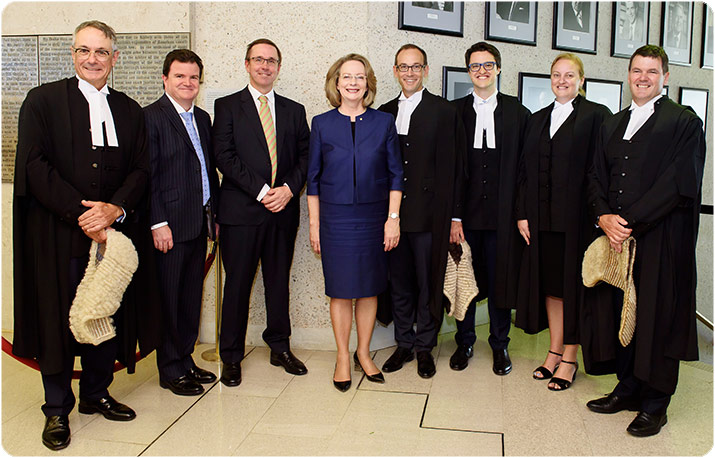 On behalf of the members of the Court I congratulate the new Senior Counsel. The Court extends a welcome to your families — your parents, spouses, partners and other family members. Your journey to the pinnacle of your profession was not taken alone. This point could not have been reached without the considerable support and encouragement of your families for whom this is no doubt an especially happy occasion.

Your appointment as Senior Counsel is a recognition of your legal knowledge, your skill and your ability as an advocate. The appointment of Senior Counsel is not a recognition of a person’s longevity as a barrister. It is made because the nature and extent of a person’s practice suggests that she or he is able to undertaken complex and difficult work and to lead others in the conduct of litigation. It is made because he or she has the personal qualities necessary for leadership at the Bar.

Your appointment marks a new phase as a barrister. All that has gone before has been but preparation for your new role. There is much to be learned, more perhaps than you may presently realise. I do not speak so much about your work taking you into new areas of law, as undoubtedly it will. It is your new responsibilities of which I speak.

Being Senior Counsel is not just about acquiring a higher status within the profession. With that status comes responsibilities. The courts will expect more of you. Your Bar Associations will expect you to participate more fully in the affairs of the Bar and to assist when important issues arise. You will be expected to provide guidance to junior members of the Bar. Above all you will be expected to conduct yourself at all times with the dignity and civility that your position demands.

Before there were King’s Counsel there were Serjeants-at-Law. The professional and ethical standards which they imposed upon themselves were high. Their rules of conduct required them to deal with matters in court expeditiously and not to prolong them for personal gain. They were obliged to dissuade clients from pursuing unjust causes and to advise them to abandon claims if they appeared to be in the wrong1. These standards no doubt reflected the religious and moral philosophies of their times, but the essential principles have survived as part of the standards which govern practice at the Bar. Now, as before, the maintenance of them may require steadfastness and even courage when clients and those instructing wish you to take another, less noble, course.

Serjeants-at-Law passed from history. This serves to remind us that circumstances can change and that elite groups do not always survive. They will not survive unless they are able to maintain those qualities which set them apart from others. Those qualities obviously enough include excellence as a lawyer and as an advocate. They also include that quality which is the hallmark of a true profession rather than a business enterprise: independence. It is the independence of a barrister which allows her or him fearlessly to give the advice necessary and which allows him or her to maintain the highest standards of conduct and ethics. It is to you Senior Counsel that the junior Bar will look and learn. It is in this way that the profession may continue. Your appointments are made for the benefit of the Bar. Those who have appointed you obviously have confidence of your ability to fulfil the role required of you.

The Court thanks you for the courtesy you have shown in informing it of your appointments.