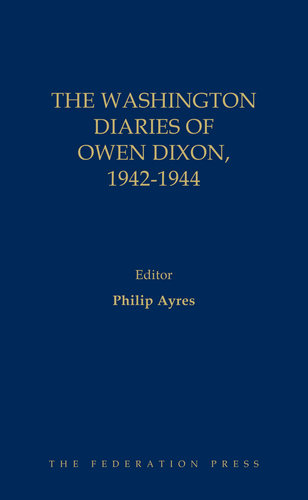 Recently I had the pleasure of reviewing the third edition of Jesting Pilate. This book that I am now reviewing describes another part of Sir Owen’s life, ie, his time in the United States during WW 2.

Sir Owen was appointed by the Australian Government to represent it at the highest level in the United States, five months after Japan attacked Pearl Harbour.

My first observation is the frequency with which Sir Owen kept in communication with his brother judges on the High Court. I have heard it said that his Court was very collegiate and although we are not told the content of his communications, their frequency bespeaks continuing close friendships. I noted that, on a return trip to Australia, within a day or so, he called on his brother judges.

The next observation I make is just how busy and demanding was this job. There were almost daily lunches, cocktail parties and dinners which seemed an accepted method of mixing during these times of war. But, as well, almost every day (including weekends), Sir Owen called on people and/ or had a multitude of visitors. He frequented the White House and had many meetings with the President. It seems evident that he quickly learned the art of diplomacy. There was no doubt that he was trusted and told things in confidence, a confidence which he did not abuse.

Two of his major tasks, which remained ongoing throughout his period in the United States, were to push for greater lend lease facilities especially aircraft to be provided to Australia and to gain an understanding from time to time of the thinking of the various leading world figures with whom he came into contact in order to keep the Australian Government well informed. Equally importantly, it was expected that he would try to influence that thinking towards the line of Australia’s views and policies.

When Sir Owen was asked to take leave from the High Court, he accepted only on the condition that his communications would be direct with the Prime Minister of Australia, allowing him to bypass Dr. H.V Evatt, the Minister to whom otherwise he would have reported. He and Evatt had previously sat together on the High Court. I think it is fair to observe that Sir Owen did not have a great liking for Dr Evatt. Indeed, my impression is that, at times, Dr Evatt seemed, intentionally or otherwise, to be trying to undermine Sir Owen’s work in the United States. Again, on a return trip to Australia, the Prime Minister agreed to reduce or remove the opportunity for Evatt to limit Sir Owen’s work.

In reading these diaries, which were never intended to be published, one cannot help but appreciate the added pressure on Sir Owen of the presence of his extended family with him. There are references to family illnesses getting him up early, notwithstanding that he had a full day of meetings. There were also many visits to hospitals whilst one of his sons was being treated for asthma and probably pneumonia. Another son had a serious eye condition. Sir Owen had to balance his heavy official workload with the needs of his continuing close relationship with his whole family.

Sir Owen was not regarded as having a great sense of humour on the bench but he clearly had one as demonstrated by his comment during a discussion about the reform of a moral delinquent  that such stories reminded him “of the cannibal chief who lost his teeth and became a vegetarian”.

My final observation is how Sir Owen went out of his way to meet and mix with colleagues in the legal profession during this time, ranging from law professors to judges both in the United States and, in particular, neighbouring Canada. He also made it his business to meet governors and politicians, not only in Washington DC where he was based, but in other States as well. Within a day of returning to Sydney during his United States sojourn, he was at the Courts!

Oh and, on his final return to Australia by ship, what did he read but one textbook on Torts and another on Conflict of Laws, again, demonstrating that he continued to regard himself as a student of the law (a reference to which was in my earlier review of Jesting Pilate).

One could write many pages about this book. Because I have a deep interest in history, it was particularly interesting to me. But anyone reading it will, I believe, be struck by the “names” who regularly appear, about whom we know so much and who, in the next generation, remained family names in this country, at least, and whom we have come to know and respect in legal, vice regal and political circles. From Churchill to FDR, and on to Gromyko, whom the book describes as one of the most able and long serving USSR diplomats (and whom many of us will remember from subsequent news reports of his activities), the Diaries are full of the “who’s who” of the world at that time.

This is a book which needs to be read over several days to give the reader the opportunity to digest its contents. I found it of immeasurable interest. I hope you will too.