Book Review: Australian Charters of Rights: a Decade On 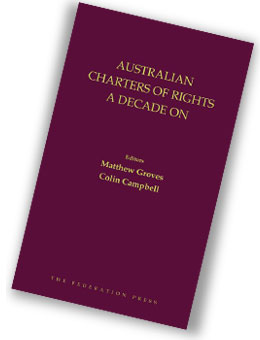 Book Review: Australian Charters of Rights: a Decade On

The framers of the Australian Constitution drew on many aspects of the American constitution in framing our own. A notable exception, of course, was the decision not to adopt some form of a bill of rights as part of our Constitution. Since Federation, the need for the recognition and protection of certain inalienable rights has however won a wide public acceptance.

The reasons for this shift in sentiment, no doubt, are multifactorial. One factor is the searing memory of atrocities during the Second World War. Another is a general decline in faith in parliamentary governance during the 20th century, coinciding, during the later part, with an acceleration of legislative activity and increase in the powers and discretions conferred by statute on government officers and bodies, leading locally to the establishment of the Commonwealth Administrative Review Committee (generally known as the ‘Kerr Committee’) in 1971 which contributed in a significant way to the development of the Commonwealth system of administrative law that we have today.

Other common law jurisdictions have adopted bills or charters of rights, notable among these being Canada and New Zealand who have enshrined basic standards taken from international law instruments into domestic law.

While Australia has not done as these other common law jurisdictions, instead, demonstrating at federal level, at least, a reluctance to enact legislation, the rights-infused language of public discourse, domestically and internationally, means that the topic of a bill or charter of rights is unlikely to disappear from the national conversation. In the meantime, leadership has emerged at state and territory level, with the ACT and Victoria introducing legislation, in 2004 and 2006 respectively.

The collection of essays, Australian Charters of Rights a Decade On, by distinguished scholars and practitioners in the fields of constitutional, international human rights, and discrimination law, edited by Matthew Groves and Collin Campbell, offers legal practitioners, policy-makers and rights advocates a rich and multi-faceted analysis of the achievements, and shortcomings, of the ACT and Victoria initiatives.

The essays are especially timely for a Queensland audience, noting that, in October 2016, the Queensland state premier announced at the state conference that cabinet was committed to introducing a Human Rights Act in Queensland, based on the Victorian Human Rights and Responsibilities Act 2006.

The grouping of the essays is in two parts. The first is an overview of the distinctive features and broader design choices in the existing charters, highlighting both their emergent strengths and weaknesses. The second is devoted to specific applications of the charters to particular areas of concern of particular interest groups, including free speech advocates, and advocates for women’s rights, religious freedoms and disabled people. While not offered as a substitute for a standard text, because the arrangement of essays approaches the topics in a systematic way, the thematic-based approach adopted by the collection still makes it a highly useful reference source, aided by a careful index.

Australia is a diverse market place of religious beliefs and practices. Of interest for the perspective it offers on this trend is an essay, ‘Religious Freedom under the Victorian Charter of Rights’ by Nicholas Aroney and others.

Noting that the relationship between law and religion is often characterized in jurisdictional terms that conventionally emphasize the independence of church and state and implicit in which is the claim that the state’s authority and what it can demand of its citizenry is limited, the authors highlight a struggle playing out in the courts between faith-based groups, on the one side, and anti-discrimination and human rights advocates, on the other, as to where the proper boundary lies between religious freedom and other interests of the state. In this regard, the authors note that, for now at least, anti-discrimination advocates, apparently, are winning the contest, suggesting that a tendency can be discerned in recent decisional law on the Victorian charter and equal opportunity legislation for an image of what it means to be a member of a liberal democratic society to be imposed upon faith-based groups whose beliefs and practices are deemed ‘non-liberal’, an aspect of which is a judicial tendency to believe that exceptions to anti-discrimination norms must be read narrowly.

An essay, ‘The Charter of Law and Order’ by Jeremy Gans is interesting in a different way, namely, for the legal vacuum that it reveals. According to a Canadian jurist, the impact of the Canadian Charter of Rights and Freedoms is most visible in the field of criminal law. In contrast, Prof Gans records that it is difficult to identify a single respect in which Victoria’s Charter is visible in the field of criminal law, at all, or has changed criminal investigation, prosecution, or social values.

The collection of essays is a significant contribution to an important area of discourse in contemporary Australian society.