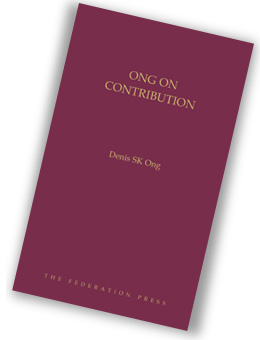 Ong on Contribution, as the title suggests, examines, in detail, the doctrine of contribution.

Professor Ong is a prolific author and, thereby, no doubt already known to a number of practitioners. Ong on Contribution is his sixth text in the field of equity, his earlier works being Trusts Law in Australia, now in its fourth edition, Ong on Equity, Ong on Specific Performance, Ong on Subrogation and Ong on Rescission.

Professor Ong’s latest work adopts the distinctive style from his earlier texts - an in-depth and insightful analysis of the principles arising from the leading Australian and UK decisions. Of great assistance to practitioners is that key passages from those decisions are reproduced. As with his earlier work, Professor Ong subjects the authorities to insightful analysis and is not shy to question the reasoning in some of those decisions.

In conclusion, although the work is relatively brief at 180 pages, Ong on Contribution is an excellent text which is available at $125 direct from the publisher. It would be a welcome addition to any chambers’ library.