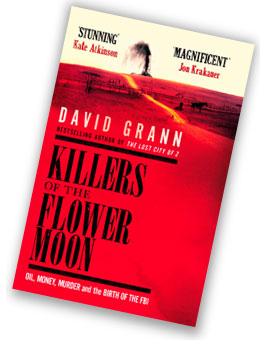 Travelling somewhere to appear in something, I made a last-minute purchase from an airport bookshop. This is a habit that so often results in a paperback that tours with me, before being passed on, half-read. Killers of the Flower Moon turned out to be anything but the ‘passed-on paperback’. David Grann’s book is terrific, telling its grim, true story beautifully.

At its core is the sad old story of Indigenous people dispossessed of identity and land by powerful new arrivals. Here it is the Osage Indians of America’s Great Plains who were beaten by cavalry, overwhelmed by settlers and subjected to unfamiliar governance. However, this story is different because the Osage become both blessed with unimaginable wealth, and cursed by it. By the 1920s, murder and mayhem is visited upon their community. Inexplicably, in ever increasing numbers, Osage Indians disappear or die.

Grann tells this compelling story through the eyes of Molly Burkhart, an Indian woman who witnesses her sisters, friends and supporters die around her. They go missing, are shot or poisoned. Two, Rita and Bill Smith, are destroyed in an explosion so powerful it reduces their substantial home to splinters and rubble. Despite the efforts of local law enforcement officers and hired private detectives, the deaths mount.

Grann uses the unexplained execution-style shooting of Molly’s sister, Anne, as a central point in his book. He tells the Osage story to this point and describes the aftermath.

The Osage’s story is one of passage from defiant warriors to dispossessed wanderers who finally settled upon Indian Territory in an area that would become Oklahoma. One Indian Affairs agent described the land as ‘broken, rocky, sterile, and utterly unfit for cultivation’. Osage chief, Wah-Ti-An-Kah, saw it differently: ‘My people will be happy in this land. White man cannot put iron thing in ground here. White man will not come to this land. There are many hills here … white man does not like country where there are hills, and he will not come.’ So the Osage bought the land for seventy cents an acre and arrived in the early 1870s. But the white man did come - because of the curse.

The curse lay in the unique deal struck by the Osage over their apparently barren land. When they settled, the Osage negotiated what would come to be called the underground reservation. Each individual received an allotment of 657 acres and had the benefit of what was a curious provision at the time: ‘… the oil, gas, coal, or other minerals covered by the lands … are hereby reserved to the Osage Tribe’. The rights to the underground reservation were to be passed by birth or marriage through the generations.

When oil fields were discovered and developed, the Osage Tribe reaped the rewards in royalties. They became materially rich, some of the richest Americans and, certainly, the richest Indians. Unable to live traditionally, caught between worlds, they dressed, traditionally, as they recalled it, and built mansions and drove luxury cars. Their new and strange affluence attracted jealousy and worse.

The Osage began to die. Some were shot, others wasted away as if victims of mysterious disease. When the deaths were recognised as suspicious, local law enforcement and private detectives tried to identify the killers. Later, it was discovered that the investigations were always doomed, marred by incompetent officials and meddling and misdirection by those who knew the truth.

Shrewdly, Hoover entrusted the investigation to one Tom White, ex-Texas Ranger. White was big and honest and led a small team that returned results. Gradually, he revealed the many deaths for what they were, cruel and artful murders.

The perpetrators were many: some merely drifters and musclemen, others white men married into or otherwise embedded in the tribe. Some were particularly heartless, willing to destroy the lives of blood relatives for money.

The motivation was the oil riches flowing to the tribe members. For at least two of the worst offenders, the road ended with prison. This was small justice for a large crime.

Scholars estimate that scores if not hundreds of Osage died between 1907 and 1923, the period the Osage call the Reign of Terror. Only a fraction of the mysterious deaths were solved.

Killers is a sobering and thrilling ride. It leads the reader to peek into the dark greedy hearts of murderous men but, also, to celebrate the Osage people who have survived.

Book Reviews
Gun Control: What Australia Got Right (and Wrong)
Book Reviews
The Ouija Board Jurors: Mystery, Mischief and Misery in the Jury System
Book Reviews
Book Review: Killers of the Flower Moon
SEE ALL