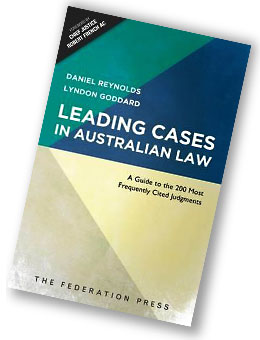 This book gave me deep inner joy of a kind that law books are not generally noted for providing.

Its premise is simple: identify the 200 judgments which are cited most frequently in Australian courts, and give each a two-page summary treatment.

The outcome is snapshot of the business of our courts – the types of matters which appear most often at application, trial and appellate level, and the leading case for the principal propositions of law in each.

There are other books that set out to do a similar task, of course, but these come out of the UK and US jurisdictions. What apparently inspired the production of this volume was the attempt by one of the authors to purchase an Australian equivalent for his own library, only to discover that none existed.

The authors are two young lawyers at the very beginning of their careers. Both worked as judges’ associates in the NSW Court of Appeal and both are now employed as graduates in national firms. One presumes that they each have inclinations, eventually, towards the Bar or academia (Mr Reynolds is to be Keane J’s associate next year) but, for the moment, they are working towards admission. To take on such a project on at this stage of their respective careers is pretty amazing. Even more so that they have succeeded.

The 200 cases are listed in order of frequency of citation (as identified by the Lexis Nexis database), rather than chronological or alphabetical order. Unsurprisingly, the first case is House v The King, followed by General Steel Industries, Project Blue Sky, and Jones v Dunkel.

The list meanders through the cases of leading significance in procedure, statutory interpretation and evidence, before diving into the subject areas which arise most frequently. It is a fascinating indication of what the Australian courts grapple with most often.

The aim of the text is not to provide a detailed analysis of the cases. Nor is it to be a substitute for reading the actual decisions and reasoning. Each case is dealt with over only two pages, starting with a one-sentence statement of the principle for which the case is said to be authority. There is then a brief summary of the facts and the decision, a few key statements quoted from the reasons, a very short commentary on matters of note, and references for further reading.

To accomplish all this in only two pages per case is, to my mind, a triumph of the clear and concise “plain English” style of writing which we, as lawyers, vocally espouse but frequently fail to achieve.

If I were quibbling, then my only criticism would be that the two-page treatment for each case is laid out on front and back of a single sheet, rather than as a two-page spread. Plain English and readability depends on layout as well as words. It is a pity that, having put so much effort into the writing, the authors let themselves down in the formatting.

The book can be enjoyed on so many levels. I started by reading the table of contents to test myself on how many cases I could identify the proposition for. I, quickly, realised it was a collection of old friends.

Then I read the summaries of cases whose names I recognised but whose propositions had left me many years ago (that was an interesting insight into the meanderings my practice has taken). I enjoyed the statistical tables at the end showing which judges are cited most frequently, and which recent decisions show promise of rising through the frequently-cited ranks over time.

I suspect I will find the book useful whenever a novel point comes up, to identify what is generally cited as the leading case – a way into an argument, even if not an actual point-winner.