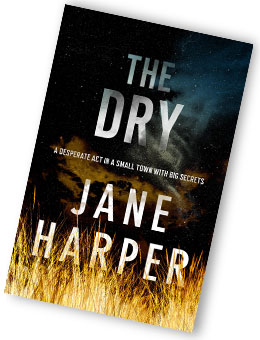 A phone call in March changed the course of my year in 2016. I accepted an item of work which took up the next five months. Its demands squeezed out many of the more pleasurable aspects of my normal routines and replaced them with an ascetic rhythm of their own. Among the things that received the flick was my participation in the Blokes’ Book Club.

It was with singular pleasure then that, one balmy night in late October, I was off to John’s Tuscan villa in Saint Lucia having read the designated book and prepared to take part in discussions.

The Dry uses a well-worked theme of mystery thrillers, namely, the return to the home town of the protagonist who has left and made a life in the city. The return unravels memories and brings back events and conflicts which have been forced below the concerns of day to day thought. The past and present rush towards one another until mysteries that haunt both are finally laid bare.

The returning child of the town, on this occasion, is Aaron Falk, an AFP investigator who specialises in fraud and money laundering. He is returning for a funeral. His childhood best friend, Luke Hadler, amid the desperation of a long drought, has used his shot gun to kill his wife, Karen, his son, Billy, and himself. Only his infant child has been spared.

Aaron intends to make the barest of social catch ups before his return to Melbourne. He does not feel comfortable in this town. Another scandal involving suspicion attaching to his father for another death had driven both father and son to the city when Aaron was in his late high school years. A lie told by Aaron at that time, at the behest of the now dead Luke, had heightened the suspicion that fell on father and son. Luke had urged Aaron to lie, purportedly, for Aaron’s benefit at the time but, in the light of recent events, Aaron is not now so sure.

Aaron runs into Gretchen, Luke’s high school sweetheart, in the grounds of the church. Along with the Ellie, whose drowning death had led to the departure of Aaron and his father, Gretchen, Luke and Aaron had made a close foursome in the years before the tragedy of Ellie’s death had brought everything apart.

A phone call from Luke’s Dad, Gerry, forces Aaron to do what he knew he had to do: visit Gerry and Luke’s Mum, Barb. Apart from being his best friend’s mother, Barb had been the closest thing to a mother that Aaron had ever experienced. His own mother had died before he had known her.

Barb and Gerry have a request. They think murder suicide is too pat an explanation for this tragedy. They want Aaron to make some inquiries to second guess the explanation which has been accepted by the police from the nearby regional centre who have conducted a cursory investigation. Reluctantly, pleading that this kind of investigation is not his thing, anyway, Aaron agrees to look at the books from Luke and Karen’s farm and make a few other inquiries to see what he can find out.

Gerry and Barb’s perhaps natural misgivings turn out to be shared by the local police constable, Greg Raco. There are aspects of the killings that do not quite add up to murder suicide, such as the positioning of Karen’s body (as if she had been answering the door to a visitor) and the shot gun cartridges, not the brand normally used by Luke for work around the property.

Aaron is unable to avoid other actors from his previous life in the town. Grant Dow, the school bully, from Aaron’s days in school has graduated to the role of town bully. In this regard, he has inherited the mantle from his uncle, Mal Deacon. Mal is still alive but, as Aaron observes, is losing aspects of his mental acuity. Mal’s part in Aaron’s past life is particularly acute since he is not only Ellie’s father but, in his role of aggrieved parent, was instrumental in driving Aaron and his father from town.

The Dry is a first novel. Ms. Harper won the Victorian Premier’s Literary Award for an Unpublished Manuscript. She brings to the task of her first novel, however, the skills of an accomplished journalist having worked as such both in Australia and the UK.

The Dry is narrated in the third person. The narrator, however, most of the time, is not omniscient but, rather, is restricted to the knowledge and feelings of Aaron Falk. Ms. Harper uses the additional device of a truly omniscient narrator, identified by italics, for flashbacks and other circumstances where the atmosphere of the novel requires a wider perspective. The technique proves very effective.

In any mystery piece of art, the reader is continually invited to ask whether a particular event or piece of information is key to the novel’s eventual resolution or whether it is mere detail designed to distract the reader. The Dry is remarkable for the extent to which everything contributes to the novel’s denouement. Even the extreme drought conditions are more than mere atmosphere and a false explanation for the deaths of Luke, Karen and Billy. The dry conditions play a key role in the dramatic scenes at the conclusion of the novel. The Dry is also remarkable for the way in which the involvement of the distant past influences the present mystery. The reader’s search for the solution will vary according to whether she thinks there is one mystery to be solved or two.

The blurb on the front cover quotes David Baldacci describing The Dry as one of the most stunning debuts that Mr. Baldacci has ever read. The members of the Blokes’ Book Club did not go that far in their praise (but they are a hard mob to please). They did think, however, that The Dry was a very well thought out and well-executed work. Ms. Harper obviously benefits from her experience as a journalist and the pre-honed skills this allows her to bring to the task.

As well as the handling of the mystery, the novel develops and works its characters well. The reader comes to identify with Aaron as his investigations reveal much about him. Most moving, however, is the pathos of the last weeks and days of Ellie Deacon’s life before her drowning death. Although the reader comes to the subject decades after the events and learns about Ellie in small dribs of information, the experience is, nonetheless, compelling. Of all the tragedy revealed in The Dry, this is what is most likely to move the reader to tears.