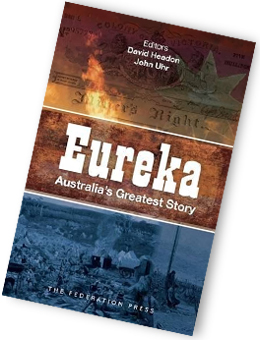 This is a book for those with an interest in Australian history and for those tired of reading boring stamp duty cases, tax cases and the like.

The editors are academics from the Australian National University who conclude their introduction by indicating:
“We hope the book will stimulate renewed discussion of this milestone moment in Australian History”
Further, the authors say:
“Diversity of interpretations and interpreters were certainly on show during Eureka’s most recent anniversary of significance, the 2004 sesquicentenary (it is worth reading to find out the meaning of that word if one does not already know). Assorted representatives of the major political parties vied with any number of other groups - republicans, miners, bikies, artists, cartoonists, union members, rabid right-wing fringers and more – to take command of the grand narrative.

The Prime Minister at the time, John Howard, predictably censorious and typically out of touch with a changing Australia, refused to allow the Eureka Flag to be flown atop Parliament House; by contrast, the ACT’s then Chief Minister, John Stanhope, flew some 200 Southern Cross Flags on just about every flagpole in the Nation’s Capital ”.
Eleven chapters by various authors (principally academics from ANU) provide a variety of insight from the historical context of the Eureka Stockade to modern day considerations of the “Eureka Legacy” as well as “Eureka” in the 1980s.

The work is well indexed and footnoted. It is of moderate length at 203 pages and contains some interesting illustrations as well as recent photographs including one of Whitlam QC posing with a Eureka Flag alongside (who will ever forget) Al Grassby denoted as “A Friend of the Flag”.

There is also a section entitled ‘The Literature of Eureka: A selection” which particularises a useful number of sources of literature on the topic.

The Federation Press on the cover of this work note:
“The editors of this book boldly proclaim that Eureka is Australia’s ‘greatest story’ and they have gathered together some of our country’s finest historians to prosecute the case…..they compile a strong argument.

…these extraordinary elements of a grand narrative will forever stimulate the Australian imagination … (the work) ‘is certain to stoke the fires’. ”
Make a note in your diary to obtain a copy.