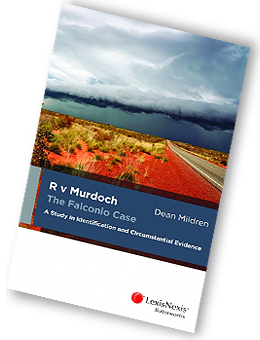 The Falconio case - A study in Identification and Circumstantial Evidence

I suspect that most Australians followed the Falconio case in which a pair of British tourists were kidnapped at gun point from their orange Kombi whilst driving north of Alice Springs. Joanna Lees managed to escape but Peter Falconio has never been seen or heard of again.

Blood found at the scene, plus the fact that Ms. Lees heard gun shots from the rear of the vehicle where her companion was talking to another male, led to the belief that Mr. Falconio had been shot and killed.

(Very recently, the Northern Territory Government is reported as having enacted legislation providing for imprisonment without parole to be imposed in any case where the body is not recovered).

Solving this case, and securing the conviction of Murdoch, relied almost entirely on circumstantial evidence: evidence which took some years to gather.

Murdoch was, on his own admission, running drugs into West Australia.

This book is an appraisal of the closing addresses together with the summing up of the trial judge (Martin CJ).

The author, who is, himself, a retired Northern Territory Supreme Court judge, provides short and useful comments, from time to time, to explain a particular tactic that was used by one or other of the lawyers and to explain the approach taken by the trial judge in his summing up.

This book provides much more than an interesting read.

There are not many Queensland lawyers who can say that they have been involved in preparation for several years for a trial. Nor are there many who have participated in a trial which took nearly two months. Or who had to address in a case based almost entirely on circumstantial evidence.

This case also brought into question a number of new DNA techniques which involved both national and international experts giving evidence involving these new techniques.

DNA samples taken from the Kombi’s gear stick and steering wheel and from blood on the T-shirt being worn by Joanne Lees provided a strong link (T-shirt) and weaker links (the gear lever and steering wheel) to Murdoch. The defence claimed that the T-shirt blood may have been put on her shirt when the three of them were at a take away food place in Alice Springs, earlier that day.

There was no evidence that Murdoch had actually been there, other than his say so well after he knew that Ms. Lees and Mr. Falconio had been there, prior to leaving Alice Springs.

Murdoch’s DNA was also found on the inside of the lining of the cable ties that had been used to secure Ms Lees. This was not easily explained as it is hard to see how it could have been placed there, other than when the ties were made into handcuffs and the lining stuck into place.

Then there was the grainy video, which we all saw on television, of the driver of a Toyota Landcruiser claimed by the police to be Murdoch. But, because of the poor quality of the film, all that one could say about it was that it bore a resemblance to him.

The closing addresses went beyond the question of guilt. Regrettably, there were a number of errors (my description) by the police in their investigation. Perhaps, the most noteworthy was that the hard drive which contained the video, just referred to, was copied onto VHS tape and the original digital copy was returned to the shop, a step which seriously compromised the quality of the images that the police had to work with.

As well, a DNA sample, ostensibly held in the most secure conditions, was contaminated by the DNA of the director of the laboratory.

I mention these because I think that the book goes beyond being a study in identification and circumstantial evidence. Counsel, necessarily, needed to deal with the issues arising from the investigation errors. From the perspective of the DPP, the issues had to be neutralised. The defence had the opportunity to use the concerns to cast doubt upon the integrity of the evidence to which they related.

Circumstantial evidence can be a powerful pointer towards guilt and this book provides a graphic example.

Finally, the summing up of the Chief Justice was, in my view, extremely neutral if not a little generous to the defence. For all that, it was, I suggest, masterful, as it left little scope for arguing error on the subsequent appeal by Murdoch.

This book, the second by Dean Mildren that I have reviewed, is one which all practitioners, who have even the slightest interest in the criminal law, should read and digest.

It should also be read by students of the law to appreciate an unusual study of how Murdoch was identified and ultimately convicted.

It is a book which will be of interest to any person with a forensic interest in the criminal law or anyone wishing to know more about the pros and cons of DNA evidence.

I found it to be riveting and difficult to put down. I think you will too.