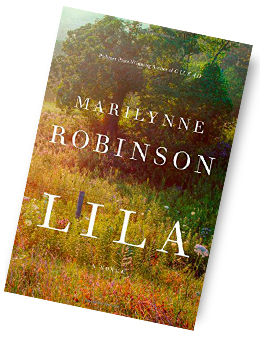 In my review of Andrew Leigh’s The Economics of Almost Everything, I mentioned that the other half of my Christmas present in 2014 was Marilynne Robinson’s Lila. As I said at the time, I read Andrew Leigh’s excellent book because I thought it would be an easier read (taking into account the pile of books that were begging my attention).

That was a very poor reason for not reading Ms Robinson’s latest perspective on life in the rural Iowa town of Gilead in the middle part of the twentieth century.

I had no excuses since I had read and loved both Gilead and Home , the preceding novels in what has become a trilogy centred in the town of Gilead but ranging far wider through the connections of its characters.

Gilead is a novel in the form of a letter by the then seventy-nine year old Reverend Ames to his seven year old son, Robbie, for the son to read when he is a man which is expected to be long after his father’s death.

Home reveals a reality that is unseen when one only looks at the world through the eyes of Reverend Ames. Home portrays the experience of Ames’ godson, Jack, a son of Ames’ best friend, Reverend Broughton, another aging pastor of a competing Protestant faith in the town. Jack is the subject of Ames’ concern in Gilead. Ames fears that Jack’s intentions towards Robbie and his mother are vindictive and that he will do them harm.

Jack’s narrative reveals that there are wrongs on both sides. Despite his ne’er do well reputation, Jack has sought both faith and virtue. If the first has been withheld from him, he has been true to the latter in his own way.

In both novels, Ames’ wife, a young parishioner who had the temerity and good sense to suggest to Ames that he should marry her, lurks close to the action. She has brought unexpected joy to Ames who had been tested by his god by the death, many years ago, of his first wife and first child, a daughter, Angeline.

She has also provided friendship to Jack whose experiences had led him to expect little good from others.

Lila is the young wife’s story.

The impression that one has from the Gilead and Home is of a young parishioner in a small town with all the respectability that goes with those words.

Lila opens with a starving and neglected child locked out of a house where people came and went and mainly neglected her as she spent most of her life under a table and lived mainly off scraps and played with a doll made of real rags.

Lila was picked up from that doorstep by Doll who, sometimes, lived and worked a little in that house. Doll had taken an interest in the child but had no right to steal her from the doorstep. The child was mal-nourished and ill from exposure from her time on the doorstep in the freezing rain. Doll, with the help of an old woman who lived in a shack in the woods, nursed her back to some kind of health.

The old woman suggested the name “Lila”. She had a sister by that name: “Give her a pretty name and she might grow up pretty”.

When the old woman could no longer offer work and shelter, Lila and Doll were forced to go on the road. They took up with a group of itinerant labourers led by a man called Doane. Life on the road with Doane’s group was Lila’s life, on and off, for most of her childhood. “Walk south ahead of the weather, walk north in time for the crops.”

We know from Gilead that the child of Lila and her husband, the Reverend Ames, was 7 years old in 1956, when the letter is being written. He was born then in about 1949. There are vague references in Lila to the Great Crash of 1929 and the hardships of the Dust Bowl years of the thirties. One can infer with some confidence that Lila’s pre-Gilead years covered the twenties, the whole of the thirties and much of the forties.

Shortly after introducing Lila’s coming to Doll and taking up her new life with Doll as part of the group of farm labourers, Ms. Robinson introduces the reader to Lila in Gilead talking with The Reverend about but a tiny aspect of her past life before seguing into the day that Lila walked into the Reverend’s church. Doane had always warned them against churches: churches just want your money. “But the rain was bad and that day was a Sunday, so there was no other doorway for her to step into”. And the candles impressed her although that have been influenced by Lila’s lack of recent meals.

Two multi-layered narratives intertwine themselves by the agency of Lila’s memories and thoughts of past and present and future. With the layers adding richness, the two narratives lurch forward and the great themes with which Ms. Robinson concerns herself play themselves out in two very different contexts linked by Lila’s own experience and personality.

The closest of love joined Doll and Lila. For all the good reasons why Doll should have rescued Lila, the taking would always be illegal and, potentially, the subject of violent revenge by those to whom Lila had belonged despite the lack of value they had placed upon her. Precariousness was increased by hints of violence in Doll’s past which may well have been perpetrated by her in self-defence, a circumstance which may never have been appreciated by others.

So, an itinerant, anonymous life suited those who had become mother and daughter to one another. At great risk to the status quo and herself, Doll had settled for a whole year so that Lila could have a year of schooling on which she could draw long after Doll was gone from her life.

And, within Doane’s group, there was community. Having very little won with great effort brought joy. There were rules, sometimes harsh, and Doane was prepared to administer them. Children found joy and friendship with one another and, sometimes, they exhibited cruelty which children are wont to do.

There was a sense of pride in the way the group related to the farms for which they worked. Doane ensured that his people always kept their side of any bargain. They were taken down on occasion but they did not allow that to lower their own standards.

And as in any community, one may not have loved everything about one’s friends and colleagues but they were your people and you cared for them and were bound to them in a special way.

Bad times, however, destroyed even this community that needed little. Farmers had left their land or were as bad off as the labourers they had previously employed whether with clean hearts or through unfair deals. Those who remained had little work to offer or could afford to pay few or no wages. The threat of starvation breaks the pride of even the most upright man. Crime and misfortune broke that community.

Faith was not a problem among those who travelled with Doane. And the availability of eternal salvation was not an issue for those for whom earthly survival was genuinely an issue of daily importance.

In contrast, the struggle with faith in and knowledge of a loving and merciful God who is, nonetheless, prepared to abandon those who had no opportunity to be baptised was at the heart of the faith questions with which Reverend Ames had always wrestled. This abandonment was the fate that such doctrine had in store for the only people that had ever been family for Lila. And when Ames’ and Lila’s lives became intertwined, this question took on importance for both of them.

The strength of Lila is the way in which respectable, mid-west life accompanied by religious worship life is juxtaposed with the struggles of landless, travelling labourers.

Faith, itself, the nature of God’s love, are but two the contrasting questions thrown up by the action. For Lila, the adjustment from one life to another raises many challenges. She misses her old life and she misses her old colleagues, especially, Doll who is probably lying dead in a field, somewhere. She suffers shame for her ignorance despite that she reads and learns, effectively and well, and that she made good use of her solitary year of schooling.

Lila suffers further shame from that she has been taken in, as a charity case, by a whole community, albeit, at the behest of the Reverend Ames. She wonders that she is loveable by anybody, including her husband. But she does not doubt his love.

Lila does not trust her own ability to continue loving or even not to disappear, one day, by simply walking out the door and never coming back. Her expression of these doubts tests, time and again, the Reverend but he comes through, expressing the sadness that this would cause him but accepting, without rancour, ahead of time, Lila’s right to make such decisions.

The narrative of Lila finishes on a snowy day, the day of the new baby’s christening. Lila finds both faith and understanding but they are crafted in her own way. “Most of the time she thought she understood things better when she didn’t try. Things happen the way they do. Why is a foolish question.”

Her understanding transformed eternity into a place where people were judged for the whole of what they did in their lives, not just the worst thing — or the best thing — they had ever done. It has much more room for the straggler than Reverend Boughton’s fiery vision of God and eternity.

As they sat in the kitchen, with the “geraniums in the window and an old man at the kitchen table telling his baby some rhyme he’d known forever”, Lila thought:

“Someday she would tell him what she knew”.

Lila ponders the great questions as I said above. But I hope that Gilead is more than a trilogy. Reverend Ames and Reverend Boughton will, no doubt, leave this world. But there are many moral questions to be faced through the sixties and seventies by those they leave behind. There is room for much further interaction between Ames’ son, young Robbie, his godson, Jack, and Lila, his wife and the others left behind.

There is much for Ms. Robinson’s readers to learn from her characters and contemplate from the perspective of small town America.

I will wait and hope.