Book Review: Public Law in the Age of Statutes 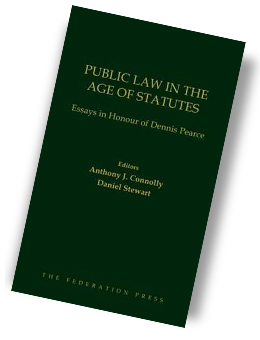 Book Review: Public Law in the Age of Statutes

Essays in Honour of Dennis Pearce

Our system of public law is a response to and also defines the constitutional relationship between the courts and the legislature. At the same time, our system of public law delimits the discretionary authority given to the legislature under our constitutional arrangement and is an important means of ensuring that the exercise of legislative power does not exceed proper limits having regard to the principles and values of our system of government.

This collection of essays, by eminent judges and influential legal commentators in the field of public law, is an exploration of the themes identified above and a valuable series of analysis and reflections on important issues in contemporary public law.

It is also a festschrift in honour of the contribution of one of Australia’s pre-eminent legal scholars in the area of administrative law, statutory interpretation, and delegated legislation and the author of Statutory Interpretation (now with Robert Geddes in its eight edition) and Delegated Legislation in Australia (now in its fourth edition with Stephen Argument).

Eloquent testimony to the depth of and respect held for Professor Pearce’s contribution is the frequent citation of his works by decisional and appellate courts, including by the High Court of Australia on more than sixty occasions, most recently in Fortress Credit Corporation (Australia) II Pty Ltd v Fletcher (2015) 254 CLR 489.

Prof Saunders, in an illuminating essay titled, ‘Constitutional Dimensions of Statutory Interpretation’, explores the implications of the Commonwealth Constitution for statutory interpretation in Australia against the background of what she identifies as the essentially common law character of the rules that govern the way that statutes are interpreted and applied in the age of statutes.

Justice Stephen Gageler, in an essay titled, ‘The Master of Words: Who Chooses Statutory Meaning?’ explores the question whether, if at all, it might be open to a court to find that statute law which limits the power of an administrative decision-maker can also leave the meaning of words which bear on the scope of authority of the decision-maker to be determined by the decision-maker as opposed to committing the question to a court. In so doing, his Honour asks whether the question, although not raised in recent cases before the High Court, notably Pilbara Infrastructure Pty Ltd v Australian Competition Tribunal (2012) 246 CLR 379, might have been available to be argued under Australian law, identifying an area of potential development that is yet to be explored without indicating how that question might be answered in a particular case.

Prof Brown, in a topical discussion, explores the importance of clear standards for the appointment of judges, royal commissioners and inquiry heads, and examines options for bolstering public confidence in the role and independence from executive government influence of Australia’s national integrity systems . Cases studies that he explores include the controversy surrounding the Queensland Government’s appointment of the immediate past Chief Justice of Queensland, the debate concerning the political independence of the State’s Crime and Corruption Commission, and allegations of bias and conflict of interest in the Royal Commission into Trade Union Governance and Corruption.

Today, the system of public law is perhaps more important than ever in the past. Our legal system (like other countries) has witnessed a significant increase in the body of statute law in the last 50 years as a result of which statute law now rivals, if not exceeds, the common law as the dominant source of law.

This collection of essays is a useful resource for the practitioner working at the leading edge of public law and interested in exploring contemporary issues in this important area of law and our system of government.