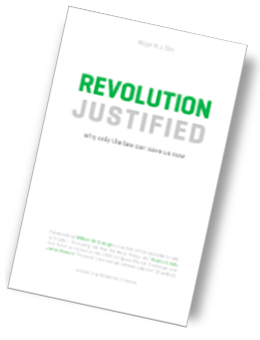 Thus the book calls for a green revolution: by means of the law.

The argument and the title receives its final articulation in the final paragraph and phrase of Revolution Justified: “Revolution by Law: a revolution justified”.

The call to arms is unusual then is that, when it was published in 2011 in Holland, it was a call to lawyers to change the world by litigation. The English version was published a year later in 2012.

The publisher, Planet Prosperity Foundation, is a foundation brought into existence by the author, Roger H J Cox, and his wife Saskia. As Cox explains, in his Acknowledgements that follow the final page of the text, the distribution of Revolution Justified was greatly assisted by another NGO, the Dutch Urgenda Foundation .

In June 2015, the highest trial court in Holland handed down a judgment ordering the government to act to achieve a 25% reduction in greenhouse gas emissions by 2020. The plaintiffs included the Urgenda Foundation. The lead counsel in the case was Roger Cox. The judgment has been appealed by the government. The story is far from complete.

But, the call to arms is unusual, also, in that it is a case of the doctor taking her own prescribed medicine. Those involved in bringing Revolution Justified to the world have responded to their own call to arms. They have played their own part in bringing about a revolution in which the judiciary, at the behest of concerned citizens, applies existing legal principles to the scientifically established facts of climate change to order governments to take remedial action which they have hitherto shirked.

For all of its 285 fascinating pages, Revolution Justified is simply structured. It consists of four clearly identified separate parts.

Part 1 addresses the history of the exploitation of petroleum. It looks at the world’s dependence on petroleum arising from the dramatically beneficial changes that oil has wrought to our lifestyle.

Part 1 also reveals the costs of dependence on petroleum; the wars that have been fought to maintain access to the mineral; the interventions made to political processes for the same reason; and the power that has accrued to great corporations and, more recently, oil producing countries because of the dependence that countries have upon the assured availability of petroleum.

The converse of dependence is the adverse effects that are suffered when access is disrupted and, inter alia, Cox discusses the impacts of the oil crisis of the seventies to illustrate the suffering that ensues.

And Revolution Justified explains the phenomenon of peak oil and the unavoidability of societal disruption and social upheaval in the wake of the peak when the available supplies wither away, slowly at first but with an inevitable acceleration.

Part 2 of Revolution Justified is a study in climate change. Cox discusses the science. He reveals how the reality of climate became evident and the scientists and communicators that brought news of that reality to the world’s public.

And Part 2 discusses the alarming consequences of unchecked climate change.

Among a number of reports relied on by Cox is the 2007 fourth assessment report of the Inter-Governmental Panel on Climate Change . As Cox points out, the level of scientific certainty displayed in that report (which crystallises the research and opinions of the world’s best scientists with research in relevant areas) that climate change will bring dramatically destructive consequences to life on this planet is alarmingly high.

Inherent in parts 1 and 2 of Revolution Justified are the difficulties faced by politicians and government in taking practical and effective steps to deal with the two great threats to everyone’s well-being: peak oil and climate change. Part 3, called “The Failure of Democracy” makes explicit these difficulties.

Governments have failed and continue to fail to act. Corporations, especially oil interests, have disproportionate power. Politicians are intimidated, if not corrupted. The voting public have short memories and a short term focus in addressing the future. The media give space to those who argue, without scientific basis, that there is no problem.

Catch 22 operates at its most fulsome. Politicians fail to articulate the problem. Governments fail to act. And the public, picking up the message from those who should know, believe there cannot be a problem: “otherwise, our government would be doing something”. As a result, politicians are even more afraid to speak out and to act. And so on.

The failure of democracy is a difficult argument to make. It seems to follow that the next step is to anti-democracy. And we all feel the force of Churchill’s famous dictum that democracy is the worst form of government until one considers all the alternatives.

It seems that Cox is aware of the dangerous ground on which he treads. He explains the important role of the judiciary in a democracy: that they are, themselves, charged by democratic principles with exercising power and they play an important role in balancing the power bestowed upon parliaments and executives in any democratic system.

The other difficulty with any argument that only the law can save us now comes from another catch 22. The law may save us. But, first, Parliament must pass the laws on which we can rely. And, if Parliament is failing the test of climate change, how can we expect it to pass the laws that will save us?

It is the answer to this catch 22 that is the subject of the fourth and final part of Revolution Justified bearing the same title as the publication, itself.

In short, Cox’s response is that the laws are already in place. Not surprisingly, it is this argument which is the most fascinating part of Revolution Justified.

Cox relies on tort law and he relies on environmental laws that are already in place. He also relies on the growing scholarship pointing out the relationship between unchecked climate change and its impact on the human rights of those affected and existing treaty and constitutional protections against human rights infringements.

Cox discusses two specific tort cases, Holland’s equivalent to the snail in the bottle of ginger beer . One case concerns a delivery man at a hotel who left a hatch to the cellar open and unguarded. The case held that a prudent man was liable to the less than perfectly hotel customer who stepped into the open space and fell, to his serious detriment.

Governments, Cox argues, are no less expected to be prudent and to take steps to guard us from the dangers of unmitigated climate change.

Cox also discusses the case of a small child who fell into a peat bog and was injured by being burned from the heat in the smouldering peat. From this case, Cox takes the principle that a prudent man does not have to have created the danger to be responsible to guard against it.

The other case on which Cox places significant weight is EPA v Massachusetts (“EPA”). In EPA, the defendant argued that greenhouse gases, particularly, carbon dioxide were not comprehended by references in legislation to “air pollutants”. If Congress wanted the EPA to act upon the threats of greenhouse gases, it should pass new legislation. Pollution was something that you could see and smell and that made you sick, pretty much straightaway.

In EPA, the court considered that “air pollutant was broad enough to comprehend the dangerous impact of carbon dioxide on the world’s climate and that it did not matter that, when the legislation was passed, the Congress was not thinking about climate change or greenhouse gases as the subject of the legislation that it was debating and passing.”

Cox’s argument is that, whether in legislation or in concepts such as the prudent person test, the law has rules and principles that are capable of responding to the dangers of peak oil and climate change. The concepts are available. The evidence is certainly available in the science collected in the 2007 IPCC Report.

And cases like EPA show that the judges who staff our courts have the intellectual capacity and flexibility to apply those concepts to the drastic content of the scientific evidence.

And, as Cox also discusses, it will be too late when climate change has wrought its work. Neither the governments which fail to act, nor the corporations which are producing climate change, will be able to pay the compensation owed to the people who have suffered the loss of lives and livelihood, because they will be similarly affected.

So, one of the challenges to the courts in applying existing principles is to also apply those principles which allow preventive orders to be made to stop or mitigate the harm that is both threatened and inevitable if orders are not made.

In discussing human rights jurisprudence, Cox points out the potential of the European Convention on Human Rights to be enlisted in the cause of effective action against climate change. He also discusses the potential of orders made by the European Union to facilitate the spread of standards against democratic failures. As an example, he discusses how litigation had EU rules imposing standards for tendering of services required by government had rapidly prevented local politicians from handing out favourable contracts to their local favourite donors.

It is rare that, within a period of less than five years, a mooted legal argument is seen to be bearing fruit.

Perhaps, it was necessary for Roger Cox and the Urgenda Foundation to follow their own advice for that to happen.

But it is not just them. A similar case is pending in Belgium and others are said to be contemplated in a number of countries including Australia.