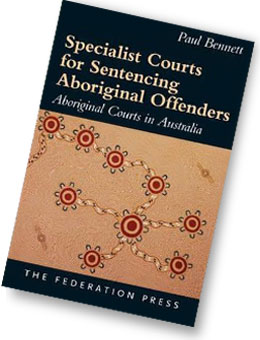 This text (“Specialist Courts”) is a succinct, informative and offers a great insight into these little-known specialist courts within the Australian legal system. Such courts have had a relatively short history in that the first Aboriginal Court commenced only in 1999 in South Australia. The book highlights the often difficult paths these courts have had to tread and the obstacles they have faced. In Queensland, they were abolished in recent years, but have now fortunately been resuscitated, and again form part of our legal structure.

Importantly, Specialist Courts offers a practical guide as to how these courts work. Chapters, broadly, include the following subject topics: How Aboriginal Courts Work; The Roles of the Participants, which includes the role and significance of Elders and family; and The Decision Making Process, which includes the role and the relationship of, amongst others, the Magistrate and the Elders and how the sentencing approach may be different to “mainstream” Courts.

Also, importantly, one of the chapters is titled What Do Aboriginal Courts Achieve? This chapter considers some of the research that has been conducted and the limitations with the present research. This chapter provides broad detail of some of the findings and suggests possible ways to improve the research and assessment process.

The text is very informative and educational. As alluded to earlier, it is succinct, in that Specialist Courts runs to just 130 pages. However, the book gets right to the heart of the key issues and is very descriptive, easy to read and to follow. In this reviewer’s opinion, Specialist Courts is a must for every lawyer practising in crime and would be a very useful text for students, not just of law, but of a number of disciplines as it highlights some of the issues that face Aboriginal Australians.

At a price of $49.99 from the publisher it represents good value for money.